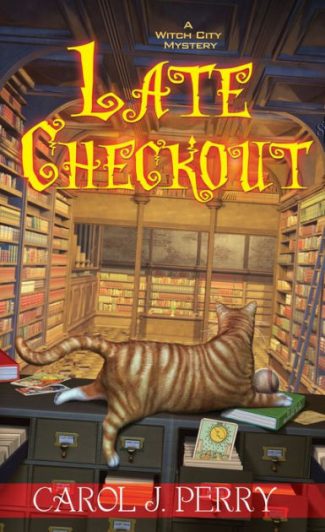 A murder in the stacks of the Salem, Massachusetts library kicks off Late Checkout by Carol J. Perry, the latest book in the Witch City Mysteries, featuring WICH-TV on-air reporter Lee Barrett.

This cozy mystery is set during the month of October, a particularly spooky time in Salem. And this time, it’s personal. Lee is the one who discovers the body of a former minor sports star who also worked various jobs at WICH in the 1970s. And she is the only person who may have caught a glimpse of the killer:

I capped a hand over my mouth. This wasn’t a vision in a car mirror. The foot was real. It worse a dark blue athletic shoe and a grimy white sock. It was a small shoe.

Even before I saw the man—because surely, it was a man and not a child—I saw the jumble of books. The narrow aisle was strewn with them. Some lay open, their pages crumpled, even torn. Some sprawled, tentlike, bent leaves splayed out on the gray floor while ragged-edged sheets of printed words, ripped from cast-aside volumes, littered the confined space from end to end. I hardly dared breathe.

Lee becomes wrapped up in the search for the killer as she performs research on various children’s TV performers at the local news channel. And that’s actually the charm of this mystery: Lee’s deep dive into those fascinating long-ago stars, with names like Ranger Rob, Katie the Clown, and Professor Mercury (Of Professor Mercury and His Magical Science Circus.)

Each one of these characters, including the dead man, brings back a nostalgic slice of how local television used to be, especially to Lee herself, who loved Professor Mercury’s show as a child. The story also brings in the world of sports collectibles, including the intense speculation on certain memorabilia items that once took place.

For readers of this series, all the familiar cast is present: the crew at WICH-TV; Lee’s aunt, who shares part of her home; her police detective boyfriend; and O’Ryan, the psychic cat who sends visions to Lee to help her solve cases. There is also a slight paranormal element, with visions only appearing in dreams or in Lee’s car mirror to provide her with a direction for her investigation.

The pacing, however, is a bit slow. Lee seems fine with taking a leisurely time through the investigation, moving from one part to another without too much urgency. She is no Lois Lane charging after a story, even being somewhat sanguine about a new on-air reporter taking over much of her work. But it should be remembered this is a cozy mystery, not a thriller, and the appeal for readers who like cozies is a walk through the story world, rather than an intense rush to find the culprit.

The other issue is with the ending, which is as tense as a reader could want, but the solution to the locked-door mystery borders a bit on cheating. There are clues but certainly not enough of them for a smart reader to guess how it will play out. Still, Lee is a smart protagonist and the overall climax is excellent as the cold-blooded killer is revealed.

If you’re looking to stroll around Salem, its library, get caught in the pumpkin run, and spend time with the unique characters that populate this story, this may very well be your book.