Book Review: Laetitia Rodd and the Case of the Wandering Scholar by Kate Saunders

December 5, 2019
The Case of the Wandering Scholar is the second book in the Laetitia Rodd Mysteries, which sees Kate Saunders's Victorian detective on the hunt for a missing Oxford academic. 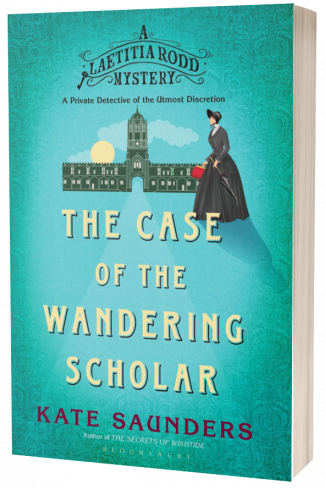 Laetitia Rodd and the Case of the Wandering Scholar

Mrs. Laetitia Rodd works hard for her money. She is the middle-aged widow of a clergyman—her beloved Matt—and neither of them expected a “vigorous man of one-and-fifty, who had known scarcely a day’s illness in his life,” to die suddenly and without “making provision for his widow.” It’s 1851, a turbulent time in England: horse-drawn carriages coexist with railroads. Laetitia is resourceful, kind, a tad judgmental, well-connected, and altogether a delight. She cares about the people in her orbit although she is not blind to their foibles. Laetitia lives contentedly enough with Mrs. Mary Bentley, her landlord, and dear friend, in Well Walk, a tiny house on Hampstead Heath. On a beautiful May morning, she and Mary are busy in their tiny garden, “shelling peas” and darning.

Once upon a time, as wife of an archdeacon presiding over a comfortable establishment in Bloomsbury, I had employed a gardener. As an impoverished widow, I was now forced to do the work myself—but I am country-born, and knew perfectly well how to make things grow.

Laetitia is resilient and she does not repine. Her brother’s wife doesn’t think Laetitia’s independent living situation is “sufficiently genteel” but since the alternative is for Laetitia to “stay in the bosom of the family as an unpaid governess,” Well Walk it is.

Readers were introduced to Mrs. Rodd in The Secrets of Wishtide. How did an impoverished widow become a private detective?

Her brother, Frederick Tyson, is a criminal barrister living in the neighboring village of Highgate with his wife and ten children. Frederick finds the cases, and Laetitia solves them using her arch intelligence, her iron discretion, and her immaculate cover as an unsuspecting widow.

Frederick is “one of the most celebrated criminal barristers in London,” relishing “the goriest murders.” The press and public adore the “extravagance of his performances in court,” but older sister Laetitia is not fooled by his public persona: Fred is wily, intelligent, and shrewd. He bounds into her house as she tends to her sewing, at his most jovial, telling her it’s not “a social call.” Oh good, perhaps it’s a “substantial” assignment with a hefty fee.

‘More than decent,’ said Fred. ‘I don’t know the particulars, but the client is as rich as Croesus – and very willing to pay through the nose for your services.’

It’s not your average assignment. Jacob Welland is in the final throes of consumption, and before he dies, he wants to be reunited with his brother Joshua Welland. The brothers haven’t seen each other for fifteen years.

Joshua Welland was an Oxford scholar; brilliant, eccentric and desperately poor. Nobody can say exactly when he disappeared from his college, but he took to wandering the countryside and one day simply failed to return.

There have been sightings of the “wandering scholar” over the years, some say he left Oxford and fell in with the gypsies, but he has shown no inclination to rejoin society. Can Mrs. Rodd help? The “enormous” sum Jacob proposes to pay her is very welcome and she agrees to take the case although her scruples are such that she demurs somewhat.

‘You hinted that he doesn’t wish to be discovered,’ I said. ‘If this is so, I cannot do more than inform you of his whereabouts.’

‘He must be told that I’m dying. And that I wish for his forgiveness.’

Laetitia is an unprepossessing widow with a secret weapon—her friendships within the clergy are deep and sincere—she is one-degree-of-separation from clerics and their families, from little hamlets to bishoprics. Joshua Welland was once an Oxford scholar, so when Fred jokingly asks his sister if she “has any connections in the area,” he knows full well she does. She tells him that Arthur Somers (her husband’s former curate) and his wife Rachel have “a living just outside Oxford, and their house will make an ideal base.”

A theme of The Case of the Wandering Scholar is money or the lack thereof. Joshua Welland was an undisputedly brilliant academic, but he could not afford to stay at Oxford. Kate Saunders illustrates Joshua’s sad choice with a chilling quote from Alfred Tennyson: “Every door is barred with gold, and opens but to golden keys.” The poverty Joshua endured was genteel, but it was painful and career-ending nonetheless.

Mrs. Rodd spends a few productive weeks with the Somers, reacquainting herself with friends and former servants, combing the countryside for clues of the mysterious scholar and leaves the area confident that the news will reach Joshua that his dying brother wants to see him. Tragically, while on a working vacation with her brother and his vast family (she’s pressed into duty as a nursemaid when her sister-in-law falls ill), Laetitia is informed that a murder was committed in the bucolic countryside outside of Oxford. Her presence is requested immediately. When she arrives, Scotland Yard in the person of her “old friend Inspector Blackbeard,” are on the scene. Inspector Blackbeard is very much by-the-book and tends to poopoo Laetitia’s theories about the innocence of the suspected villains. But Laetitia is a phenomenal observer and she has a prodigious memory for past events. This allows her to ponder alternative solutions to crimes. Blackbeard may decry talk of gypsies and secrets from the past, but Mrs. Rodd is convinced that sinister forces are at play.

Other topics touched on in The Case of the Wandering Scholar are the schism between the Papist and Low branches of the Anglican communion (alluding to the controversy surrounding John Henry Newman) as well as the sin for which Oscar Wilde was condemned. I enjoyed my first encounter with Laetitia Rodd, a “Private Detective of the Utmost Discretion,” and look forward to more stories featuring her, her brother, her landlady, and her widespread clerical underground.