Book Review: A Lady’s Guide to Mischief and Murder by Dianne Freeman 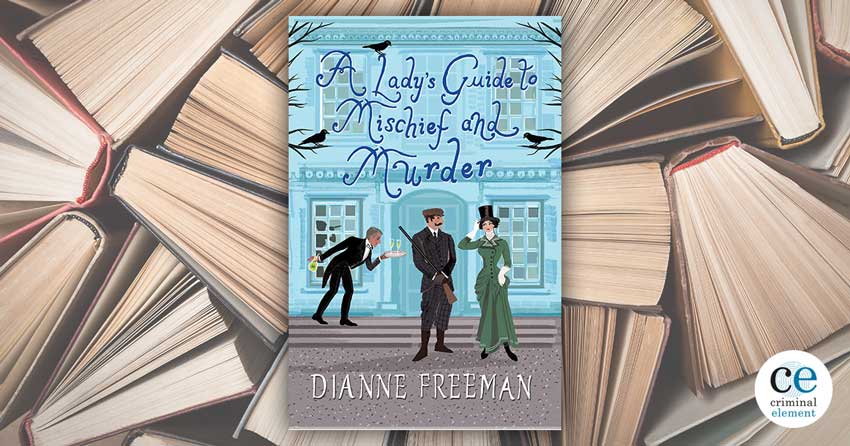 A Lady’s Guide to Mischief and Murder by Dianne Freeman is the third book in the Victorian-era Countess of Harleigh Mystery series, where Frances Wynn, the American-born Countess of Harleigh, finds her sister’s wedding threatened by a vow of vengeance.

Themes of “money, independence, and family relationships” are cleverly woven into the fabric of the third Countess of Harleigh Mystery. In Freeman’s A Lady’s Guide to Gossip and Murder, the widowed countess harnesses the talents of her family and friends to solve a complicated crime. She is proud of her penchant for detecting. Her friendship with her next-door neighbor George Hazelton (a fellow sleuth) blossoms into a secret engagement. Life is delightful; what could go wrong?

Why does it always happen that just when I begin to feel life simply couldn’t get any better, fate drops a disaster into my path to prove me right?

Frances’s younger sister Lily and Lily’s businessman fiancé, Leo Hendrick, have anticipated their wedding day and are now expecting a baby. They plead with Frances to rescue them. Frances and Lily’s ambitious mother has repeatedly pushed back the wedding day. The sisters know why—their mother wants Lily to marry an aristocrat, like Frances. Frances has also been in favor of delaying the nuptials. Her first marriage “was a disaster,” and she doesn’t want Lily to rush into matrimony. Confronted with the worst society solecism imaginable, Frances is rueful.

Is it any wonder I wanted Lily and Leo to have a long engagement period? To take some time and come to know one another?

Clearly, they came to know one another all too well. Now what were we to do?

“Leo suggested we elope,” Lily said, almost in a whisper.

Her words pulled me from my thoughts. “Oh, no, dear. That will never do.”

What are their choices? A hole-in-the-wall wedding at some obscure London church? Disappearing to Scotland for months until the babe is born isn’t possible because Leo works for his father. A discreet wedding at a quiet country estate would be ideal.

“If Graham weren’t selling Harleigh Manor, we could arrange a wedding there in under a week,” I said. “Just have the closest family members in attendance. As long as we’re not in town, no one will feel snubbed if they aren’t invited.”

I sighed and leaned against the desk behind me. Selling the old family home was the best idea my brother-in-law ever had. The behemoth of a mansion had sucked several fortunes into its very walls, including mine.

Where are they to find a suitable country retreat on such short notice? George stops by and notices that Frances is perturbed. George doesn’t want anything to interfere with their plans to visit Risings, his brother’s estate, saying, “A romantic rendezvous requires the presence of both parties.” She tells him it’s “just a little trouble with Lily and Leo’s wedding plans,” necessitating an immediate elopement.

He responded with a blank stare. “They are marrying soon.”

Clearly, I needed to work on my facial expressions. “No. I mean they must marry immediately.”

His raised brows told me he finally understood.

No problem. “Bring them to Risings,” says George. Frances gratefully accepts. George checks his pocket watch and, unbeknownst to him, a letter slips out. He has a stop to make, he says. Frances picks up the letter and asks, “Is your stop at Newgate Prison?” He snaps at her, wondering why she would think so, but Frances doesn’t miss much and saw the address on the envelope.

He rested a finger against my lips. “Don’t even ask. You know I can’t tell you.”

“I’m marrying a very mysterious man,” I said, the words distorted by the pressure of his finger on my lips. With a smile, he replaced the finger with his own lips, and I was reminded how much I loved him.

Things get off to a scary start when George meets Frances at the train station. Frances is herding cats—corralling relatives, servants, her daughter, Rose, and her nurse—when she sees “a cart full of baggage fairly flying down the steps directly at George and Leo.” George grabs Leo’s arm and jumps out of the way, but it’s disturbing. While George and Frances are strolling later that afternoon, they hear “shouts and excited voices.” They are shocked to see a “man lying facedown on the ground.” Frances is concerned.

Unfortunately, incidents in which Leo is seemingly the target continue—although that’s difficult to prove. We’re in closed-mansion-mystery territory, à la Dame Agatha Christie. Someone(s) on-site is the target, and the perpetrator is in their midst. Some of the incidents have a humorous side to them, like when one of the gentlemen is shot in the buttocks during an archery tournament.

The green baize door between upstairs and downstairs is not much of a barrier. Bridget, Frances’s lady’s maid, is her mistress’s eyes and ears downstairs, but the illicit relationships running rampant at Risings surprise both women. The butler is the downstairs CEO. He stifles the servants’ ability to answer questions frankly, particularly to Frances. It’s impossible to zero in on the murderer’s target because of the geography of the mansion. All the unmarried men are grouped in one wing.

Frances isn’t a professional investigator like her fiancé, but she’s a skilled questioner. Not everyone is thrilled with her approach, but in her pursuit of the facts, she leans into her American feistiness. At the heart of her reluctance to marry George is the equitable relationship that they have established. Will that disappear when they marry? She pinpoints the difficulty:

“But we never touched on the topic that concerned me the most. What role would I play in this partnership?”

Frances has been instrumental in solving crimes—why would she want to bin that after marriage? Another issue is that George is known to criminals because of some past forays into undercover work. Will his secrets come between them, or will they join forces in detection and in life?  A Lady’s Guide to Mischief and Murder is a thoroughly enjoyable closed-circle-of-suspects mystery, and the shooting-party atmosphere adds to the ambiance.