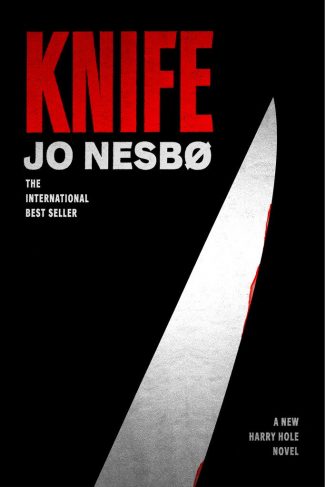 Rogue police officer, Harry Hole from The Snowman and The Thirst, is back in Jo Nesbo’s latest thriller, Knife, and in the throes of a new, unanticipated rage—once again hunting the murderer who has haunted his entire career.

I can’t control anything. I just want to find the man who killed Rakel. Then I’ll wake up. And die.

This quote from the classic anti-hero, Jo Nesbo’s brilliantly complex and damaged Norwegian Detective, Harry Hole, kind of reveals the entire plot of Knife to readers. Hole is on the outside looking in as he is suspended for most of the novel from the police. Nevertheless, he continues living in the bottom of a Jim Beam bottle and trying to find the person who murdered his ex-wife, Rakel.

Knife opens up early on with the villainous Svein Finne. Finne is a serial rapist and murderer who crossed paths with Harry Hole previously and ended up in prison. For some unbelievable reason, Finne has been released and, even though he is in his mid-70s’, and is back to his lecherous and perverted ways. We see Finne, who had been nicknamed ‘The Fiancé’, seeking out women to impregnate so that he can continue his legacy through these criminally acquired pregnancies. In fact, Finne wants to be there in the hospital at the moment of birth so he can be the first to handle his child and even offer his infamous knife to cut the umbilical cord!

As Harry Hole begins scouring his alcohol-drenched mind for the names of past criminal types who might want to seek revenge against him, Svein Finne fits that bill to a tee. The first half of this lengthy novel finds the obsessed Hole seeking to catch Finne in the act of raping and/or coercing a young woman into his impregnation scheme. When that doesn’t work out, he just decides to take matters into his own hands by capturing, torturing and ultimately turning his arch-nemesis back to the authorities where a new trip to jail will shortly follow thereafter.

The term knife, as well as literal discussions about it and its many uses, are peppered throughout this novel. You just know Nesbo is waiting for the perfect opportunity to bring things back to this weapon of choice. The question is, how is he going to use it?  Fans of this top-notch international murder/thriller series will relish all of the recurring characters around Harry Hole and how dysfunctional his relationship with most of them has become. Hole has a lot of time on his hands to obsess about his murdered ex-wife as well as bemoaning the fact that even in Norway, a country that statistically ranks as one of the happiest places on earth, there are brutal murders.

Another thing I love about Harry Hole novels is the opportunity to talk about music. Jo Nesbo/Harry Hole, continuously makes references to popular music to the point that I am always eager to learn what Harry is listening to now. It also puts Nesbo in good company with other genre writers like Peter Robinson, George Pelecanos and Michael Connelly, who always take the time to illustrate their characters musical likes. In fact, the knife that allegedly killed Rakel was found shoved between the Rainmakers and the Ramones vinyl albums (arranged in meticulous alphabetical order and inter-filed in release date order by artist all via the deft hands of Mr. Hole).

About mid-way through Knife, Finne is ruled out as Rakel’s killer as his alibi for that night and time is validated. This now sets Hole down several different paths, including one point where he contemplates committing suicide in grand fashion when he toys with the idea that he killed Rakel during a drunken rage. I won’t go any further, lest I spoil the fun for you. Jo Nesbo’s books, particularly the Harry Hole series, is simply one of the best in the business and I eagerly dive into each new release and never disappointed by the time I come up for air upon completion. Reading this even made me pull out my Blu-Ray of The Snowman, the film based on one of the more popular Harry Hole novels, which starred Michael Fassbender and did not get enough love from the critics. If you are new to this series I highly recommend starting from the beginning of the catalog and see what all the hype is about. Then, give the film a spin and enjoy a few hours spent in the world of Nordic Noir!

Comment below for a chance to win a copy of Knife by Jo Nesbo!

Knife Comment Sweepstakes: NO PURCHASE NECESSARY TO ENTER OR WIN.  A purchase does not improve your chances of winning.  Sweepstakes open to legal residents of 50 United States, D.C., and Canada (excluding Quebec), who are 18 years or older as of the date of entry.  To enter, complete the “Post a Comment” entry at http://www.criminalelement.com/book-review-knife-by-jo-nesbo/ beginning at 12:00 a.m. Eastern Time (ET) August 1, 2019. Sweepstakes ends at 11:59 p.m. ET August 14, 2019. Void outside the United States and Canada and where prohibited by law. Please see full details and official rules here. Sponsor: Macmillan, 120 broadway, New York, NY 10271.