Book Review: The Killer Across the Table by John Douglas & Mark Olshaker 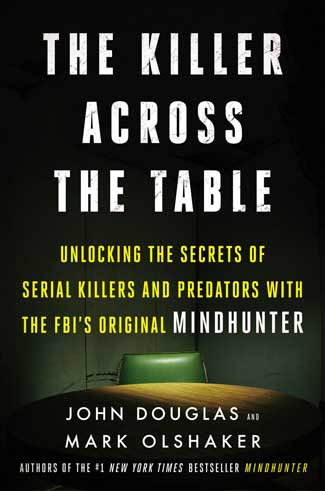 The Killer Across the Table

A glimpse into the mind of a man who has pierced the heart of human darkness, The Killer Across the Table by John Douglas & Mark Olshaker unlocks the ultimate mystery of depravity and the techniques and approaches that have countered evil in the name of justice.

John Douglas is perhaps the premier authority on serial killers in this country. He is a legendary FBI criminal profiler who basically wrote the book on FBI criminal profiling and taught others how to do it for many years. He is a life-long student and chronicler of the darkest side of human behavior, a bestselling author, and the inspiration behind the Netflix show Mindhunter, which offers a glimpse into the lives and crimes of four serial killers. In The Killer Across the Table, Douglas, with the help of longtime collaborator Mark Olshaker, shares not only the history of how he became a legendary profiler but also how he gathered information that allowed him to understand the psyche of some of this country’s most deranged, sadistic, and opportunistic serial killers.

The Killer Across the Table is a comprehensive look at how profiling works. But first, Douglas shows readers how profiling came to be, how they gather information to do what they do, and how it can be used to keep people safe as well as to catch predators still on the loose. To do this, he gives readers an insider’s look at his research approach and his systematic questioning techniques. The information that comes from this is valuable from a research/profiling perspective, but it is also incredibly interesting to read about. This last element makes this one a must for fans of true crime.

Furthermore, it is an absolute must for those with an interest in serial killers because the author interviews, deconstructs, or talks about both well-known serial killers and those who are less known. That list includes Charles Manson, ”Son of Sam Killer” David Berkowitz,  Ted Bundy, “BTK Strangler” Dennis Rader, John Wayne Gacy Jr., “Green River Killer” Gary Ridgeway, Joseph Kondro, Joseph McGowan, and Donald Harvey, who may be the most prolific serial killer in American history but who’s not as well-known as some others because his murders were done in hospitals and were not as flashy or gruesome as those of killers like Gacy or Bundy. And those are just some of the many serial killers discussed/interviewed in the book.

This book works for many reasons. Chief among them is the richness in the writing. Douglas and Olshaker delve deep into each killer’s past, their crimes, and the relationship between them. They also discuss the factors that may have led them to do what they did and show how knowing about this can help take other killers out of circulation as well as keep some who might be up for parole in prison by showing that they are disposed to do it again. Douglas also breaks down his interviewing techniques and offers a rare glimpse into his own psyche as he deals with these individuals.

Whatever my personal feelings, what is important to me in all prison interviews with violent offenders is not to express my own moral outrage, which accomplishes nothing, but to learn as much as I can by establishing a connection with the subject.

Despite being rich in descriptions and analysis, The Killer Across the Table never takes knowledge for granted. It starts with a simple definition of what a serial killer is and scaffolds its way into discussions about how their psyche operates.

The hunt is a key component of the fantasy and often just as fulfilling as the crime itself. I have likened the serial predator to a lion on the Serengeti Plain in Africa, looking out over a large herd of antelope at a watering hole. Somehow the lion locks on a single one out of those hundreds or thousands of animals. He’s trained himself to sense weakness, vulnerability, anything that makes that one individual a more likely or preferable victim than the others. It is part of the hunter’s essential psychic makeup.

Another element that makes this an outstanding read is how the authors correlate their knowledge. Each chapter focuses on a specific case, but whenever the authors discuss something important, they bring in evidence from previous cases to make their point and show profiling’s effectiveness. One great example comes in the chapter dedicated to Donald Harvey, a killer who may have murdered more than 87 victims, most of them while working at various hospitals. While he explained his murders as merciful acts, Douglas and Olshaker demonstrate how he got off on power and control, just like Richard Speck.

When I interviewed Richard Speck, who had raped and murdered eight student nurses in their shared apartment in Chicago in 1966, he told me that he had cultivated a sparrow as a pet in his prison cell. When Authorities told him that he couldn’t keep the bird, in front of them he proceeded to squeeze the bird to death in his hand and then threw it into an open fan. It was all about power and control. I saw the same emotional scenario with Harvey.

The Killer Across the Table is an uncomfortable read. There is plenty of rape, abuse, torture, mutilation, and descriptions of murders. However, it is a necessary read because it dismantles the idea that all serial killers act the same and look like evil people. They are, for the most part, relatively normal. The cases featuring children are especially compelling, and they will surely make parents pay a lot more attention to who they interact with and how. If you are a true crime aficionado, this book should definitely be on your shelves.