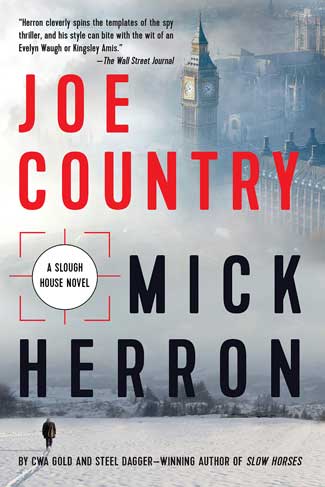 Joe Country by Mick Herron is the sixth book in the Slough House espionage series.

Though home to MI5’s least wanted, Slough House—the setting for Mick Herron’s ongoing series about unlikely spymaster Jackson Lamb and his menagerie of disgraced agents—is not without its secrets. In Herron’s sixth novel in the series, Joe Country, those secrets blossom into deadly revelations for Lamb’s misfits, known as the Slow Horses by their more respectable counterparts at MI5’s headquarters.

Joe Country finds the various Slow Horses in moments of reflection. River Cartwright, whose promising career as a spy was derailed in the first Slough House entry, is preparing to bury his grandfather and mentor, a legendary spy in the agency and the only reason Cartwright still has a job at all. Catherine Standish, the Slough House admin who keeps everyone barely functional, is about to fall off the wagon, and Louisa Guy is reluctantly pursuing a case that involves her old flame, Min Harper—another Slow Horse who met an untimely end. And then, there’s Jackson Lamb—disheveled, misanthropic, and a walking disaster but one who’ll wage all-out war on anyone who messes with his agents (or, as he calls them, joes).

Who wants to mess with a bunch of washed-up spies, though? Plenty of people, it turns out. River’s estranged father—a rogue CIA operative last seen in an earlier Slough House novel—returns, and he’s been hired by a high-powered politician to mop up any trace of a potential scandal. Meanwhile, Louisa’s gone off on her own to find her dead lover’s son who’s disappeared in Wales.

Readers familiar with Herron’s characters won’t be surprised when all the plot threads smash together in ways that are surprising, horrific, and often hilarious. While John le Carré guided readers through the moral ambiguities and ethical morass of espionage and the Cold War, Herron is the docent for a breakneck tour of modern spying’s absurd operations and nihilistic politics. Herron’s characters, for all their faults, believe in something—but that belief often means nothing when it crashes into indifferent bureaucrats, jaded mercenaries, and power-hungry politicians.

That Herron explores these decidedly unromantic ideas all while maintaining the genre’s dark poetry is an impressive feat. While the Slough House books are more action-packed than a typical novel by le Carré or Stella Rimington, they’re just as often replete with beautiful passages like this, reminders that no matter how realistic the genre gets and no matter how much readers know about the realities of spying, the mythic allure remains.

On a normal day London was bright and busy, full of open spaces and well-lit squares. But it was also trap streets and ghost stations; a spook realm below the real. Think of the city as a coded text beneath an innocent page, thought Richard Pynne; a hidden string of silent letters, spelling out missing words. Every footfall on every paving stone tapped out meaning few could read.

Joe Country is unquestionably for long-time readers who’ve been following Herron’s series from the beginning. Threads from previous novels are coming together, and Lamb’s machinations, as blunt and messy as they’ve been, have finally attracted the attention of MI5’s leaders. There are plenty of rewards for long-time readers, from unexpected character developments to some great jokes nestled in exciting action sequences. New readers could make it through with little problem, but the joy of reading the Slough House novels comes from these incremental payoffs of seeing losers and underdogs and has-beens drag themselves back up, bit by bit, even when without hope.

But if you’re a new reader who’s still on the fence about diving in to a new spy series, especially when there are so many others out there, check out this passage, in which Slough House admin Catherine Standish, who’s been sober for years, enters her apartment where she’s been stockpiling unopened bottles of wine since the events of the last book:

She stepped into her sitting room with her coat on, her bag hanging from her hand. The corner lamp was on a timer, and performing its usual magic; throwing its glow at the rows of bottles, allowing them to beam back fractured light, so the room became the inside of a genie’s lantern. This light spoke of blood, and stained the air with a ruby mist. Walking into it, she felt as if she were stepping underwater, and the two possible outcomes of such an action—that she would drown; that she would float—remained in perpetual tussle. This was where she lived, the edge on which she balanced. And its one enduring comfort was, she balanced there alone.

Herron is a fantastic writer, able to balance these reflective moments with pitch-black comedy and precise plotting. He’s a master of cliffhangers and one-liners, and each Slough House book is a reminder of how flexible the spy genre can be in the hands of a master. Like other entries in the series, Joe Country is topical—the harsh realities of Brexit figure into the plot’s chaos—and biting. Herron is, like his characters, somewhat hopeful underneath it all, though, and it’s a quality that makes the Slough House books so enduring.

That hopefulness comes at a price, of course. Without spoiling anything, it’s clear that the end of Joe Country signals that a reckoning is coming for Jackson Lamb and his Slow Horses. They’ve averted just as many disasters as they’ve caused during the series, but they’ve also stepped on too many toes and drawn too much attention to themselves. Whatever’s in store next for Lamb and company will be harrowing, heartbreaking, and more than a little hilarious—and longtime fans won’t be able to look away.