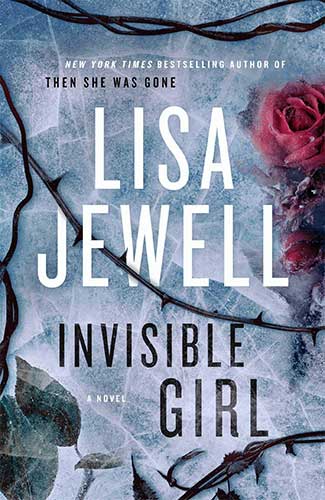 Following the success of The Family Upstairs, author Lisa Jewell will immerse readers in an intense, fast-paced plot in her latest novel, Invisible Girl.

The story follows three separate households in a skillfully intertwined collection of tragic circumstances that reminds us all that looks can be deceiving and that sometimes criminals hide in plain sight.

Owen Pick, unnoticed by women, is a virgin in his thirties. He has a decent job, but lives with his aunt in a rooming house, and the neighbors across the street, the Fours Family, seem to find him a bit odd and creepy. When an incident at a work event results in Owen losing his teaching job, he vows to make an effort to socialize and to try to date. Soon, suspicion from Cate Fours, along with a rash of sexual assaults in the neighborhood, brings the police, and their increased skepticism, to Owen’s door. He later finds himself as the only suspect in the Valentine’s Day disappearance of a troubled local teen, Saffyre Maddox, as well as other sexual deviant misconduct.

Saffyre Maddox has been hiding a painful secret. At the age of ten, she suffered a terrible experience. Her method of coping with the pain—cutting—landed her in therapy with Roan Fours. Three years into the therapeutic relationship, Roan decides that it is time to terminate treatment. Saffyre feels abandoned by the one person she thought would help her, despite the fact that she has not yet revealed to him the trauma she has endured and the real reason she is in therapy. Instead of coming clean to Roan, she keeps her secret and chooses to live her life in the shadows, angrily watching his every move, seeking her opportunity for revenge. Meanwhile, Roan is grappling with his own shadowy life, lies, and a challenging family situation.

Told through shifting points of view with each chapter, Owen, Saffyre, and Cate are all unreliable narrators with a skewed view of the circumstances they are currently facing. This keeps the story alive and allows the reader to quickly form opinions about them individually.

Collectively, the story is a hard look at what happens when people allow their perception of others to drive their suspicion of them. In addition, readers are nudged to consider the major consequences of keeping up appearances, carrying deeply held secrets, and attempting to hide one’s true self and desires.

What is the downside of acting impulsively and exercising poor judgment? What is it like to carry around trauma and pain? How well do we ever really know the people in our lives? What are the consequences of labeling others? Each of these questions will stick in the mind of the reader as they get to know Owen, Saffyre, Cate, and Roan.

It should be noted that Invisible Girl is a very dark book, finding its major storylines in the incredibly heavy themes of self-harm, sexual assault, and the incel (involuntary celibate) community. Additionally, Jewell persists with the element of spying and people watching, similar to her seventeenth novel, Watching You. But, in Invisible Girl, this element is pushed to full-on stalking with Saffyre acting on an obsession to disappear into the darkness of night and to keep an eye on Roan and others, at any cost.

As with previous books, Jewell is skillful at delicately weaving multiple, complicated plotlines, while taking time to develop shockingly real characters and intense suspense. Though there are times that the story lags a bit with elements that are more confusing, that muddle the story rather than help to move it along, Invisible Girl does have mounting suspense from the very beginning. Jewell delivers everything her readers crave: an entangled story, rich with deeply flawed characters, bold suspense, psychological elements, and a dark, twisted conclusion no one ever expects.

Check Out All of Our New Reviews!

Leslie Chatman is a Dallas-based freelance writer who believes in Hallmark love and month-long birthday vacations. When she’s not writing about the latest thrillers or cozies, she is working hard to raise money for nonprofit organizations near and dear to her. Connect with her on Twitter @leslietypes.