Book Review: How To Kill Your Best Friend by Lexie Elliott

August 26, 2021
If you suspected your best friend, the person you were closest to in the whole world, was a murderer, what would you do? From Lexie Elliott, the author of The French Girl, comes How to Kill Your Best Friend, a novel full of secrets, suspense, and deadly twists. 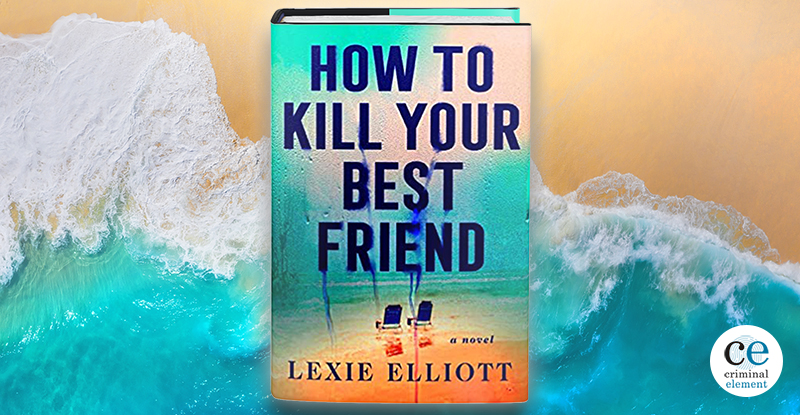 Back in university, Georgie, Bronwyn, and Lissa were inseparable, dominating their college swim team and forming a lasting bond with fellow swimmers Duncan, Adam, and Graeme. Lissa and Graeme would subsequently marry, but his sudden death several years later seemed to send her into a tailspin. She rebounded almost too quickly into the arms of charming, handsome Jem, the owner of a luxurious eco-conscious island resort. None of their friends actually expected them to marry, but soon enough Lissa was off to work and live in paradise with her new husband.

In the years since college, the gang has grown apart somewhat, with Lissa and Jem in the tropics, Duncan and Bron each raising their own young families back in England, and Adam and Georgie concentrating on their careers while pretending not to have feelings for one another. Georgie even moved to Manhattan, and was secretly glad to be further away from the rest of the group. Their secrets and burdens were beginning to weigh on her, which was the main reason she declined to attend their latest get-together on Jem and Lissa’s island. It’s a choice she’ll regret though, as Lissa goes missing that very trip while on an uncharacteristic solo night swim off of dangerous Kanu Cove.

When Georgie finally makes her way to the island, it’s for the sad occasion of Lissa’s memorial service. The rest of the gang is already there, grieving their lost friend… or so it seems. For Georgie starts getting disturbing messages hinting at foul play, while Bron is faced with even more explicit threats. As guests and employees start leaving the troubled resort behind, the women don’t know who to trust or what to believe. The locals claim that Lissa was taken by the sea monster that lurks in Kanu Cove, but none of the Brits are inclined to listen, at least not until they have an eerie sighting while swimming themselves, off a boat captained by expat and resort employee Steve:

Adam calls it a creature, and Georgie is using that word too, but sometimes she calls it a serpent instead. Steve has been wondering if it was some kind of harmless basking shark, but I see the doubt in his own eyes as he says it, and the others all agree that it was far too long—Adam estimates almost twenty meters—and much too thin for that; they got enough of an eyeful of it streaming under them to at least agree on that. I think of the cold brush of my leg in the cave; I think of the shadow that passed beneath me. For all my much-lauded practicality, it may be some time before I can get either out of my head.

Told from the alternating perspectives of Bron and Georgie, this book follows their investigations as a tropical idyll turns into a hellish nightmare of wind and water, as secrets from the past and monsters from the present refuse to stay submerged, threatening to destroy them both. The women’s viewpoint chapters are divided by eight ruminations on ways to kill your best friend, as it becomes clear that one of the friends has definitely been thinking of murdering another. The question for us readers is who and why, even as that unidentified narrator mulls over the how:

But… drowning. Difficult to do—and yet, not. Executable and believable, it ticks those boxes; of course I could engineer an opportunity for the just the two of us to swim together. That’s not the difficult bit. The difficult bit is the actual doing of it. [And] I don’t know that I could do [it]. Not in the water. Water, swimming, the clarity of it, the cleanness of it: that’s what’s been saving me. It’s sacred, in a way. I don’t feel I can sully it.

How To Kill Your Best Friend examines the cost of loyalty, and the choices we make in supporting our friends even when they do wrong. It talks about growing up and growing away from people you once thought the entire world of, and what to do when your worst suspicions of them are confirmed. While this book glories in the joys of swimming, in open water or otherwise, it also has a delicious supernatural element that doesn’t detract at all from the realism of the murder mystery at the core of it. The novel also boasts an ending that I did not see coming, yet was utterly satisfying in its resolution.