Book Review: How the Dead Speak by Val McDermid 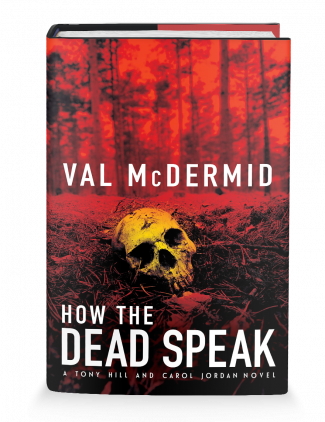 How the Dead Speak

In the latest from Val McDermid’s bestselling thriller series, Tony Hill and Carol Jordan reunite after a mysterious skeleton turns up on the grounds of an old orphanage.

‘The cases that always took the most out of me were the ones that awoke echoes from my own past.  Sometimes I learned as much about myself from the process of drawing up a profile as I did about the offender”.  – Reading Crimes by Dr. Tony Hill

Fans of author Val McDermid will recognize the author of the above quote as psychological profiler Tony Hill. Hill and DCI Carole Jordan are the team behind McDermid’s most popular series as well as the featured characters in the terrific BBC TV series Wire In The Blood. I chose this quote of Hill’s from the many that are featured in Val McDermid’s latest novel How the Dead Speak. The title refers to the fact that the only way the dead could actually ‘speak’ was through their remains, CSI evidence, and expert profiling.

The ironic thing is that at the start of this novel readers will be a bit taken aback that the Hill and Jordan team is no more. Tony Hill spends the entire novel behind bars, the result of actions he took in a prior novel, and DCI Carole Jordan is now an ex-detective.  However, the two will find themselves pulled back into a decades-old case that still requires their expertise. A mass grave of bones is found when ground is being broken on a redeveloped orphanage. The bones appear to go as far back as forty years ago. At that location during the time these bones were buried was a girls’ home site which was owned and run by the Catholic Church.

Suddenly, allegations of abuse and work spring up against the Church and it will take the most stalwart and dedicated investigators to look past the powerful reach of the Catholic Church to find and punish the perpetrators, if they still existed.  The Catholic Nuns ran the home until five years previously, so investigating the thirty or more bodies that were found will be a real challenge. DI Paula McIntyre is in charge of the new case and realizes she has quite a load on her hands if she is to find justice for the quiet dead.

As the bones are being identified, one of the names is a male victim whose killer is supposedly behind bars. Making things more interesting is the fact that the case on that killer was handled by Carole Jordan. Tony Hill has been busying himself with writing his books and using his unique talents to remain popular with the other prisoners. Now, fans can rejoice as Hill and Jordan will be briefly thrust back into action together as he can use his skills from within the prison walls to try and sniff out the truth from the incarcerated killer while Jordan lends her expertise as a Private Investigator in assisting the PD with this extremely sensitive case.

How the Dead Speak is classic McDermid. She has to really show off her writing and plotting talents as it is difficult for readers to enjoy a novel where Hill and Jordan are physically separated and far from the crime-fighting tag-team they made in their many successful prior adventures. Tony Hill won’t be behind bars forever and the prospect of his aiding Carole Jordan in her new role as defender of the less fortunate might make for some intriguing continued adventures!