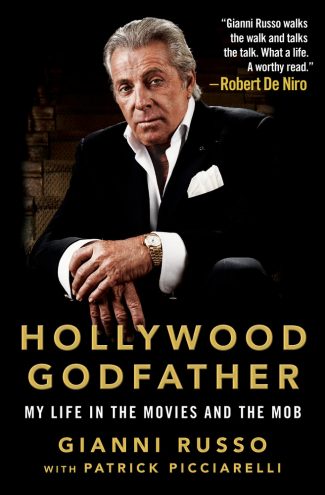 Hollywood Godfather is Gianni Russo’s glamorous over-the-top reflection on his time—both real-life and on-screen—spent with the Italian mob in the 1980s.

Gianni Russo’s memoir, Hollywood Godfather, opens with a scene that wouldn’t be out of place in a Martin Scorsese movie. It’s the mid-1980s and Russo is the owner of an exclusive Las Vegas nightclub. What should have been a normal night at the club turns dangerous—Russo and his security team intervene when a man violently assaults his date. The man takes a swing at Russo with a broken wineglass; the music stops, the crowd scatters, and Russo pulls a gun and shoots his attacker dead.

While the police are quick to sign off on the shooting as self-defense, Russo finds out he has a bigger problem: the man was a member of Pablo Escobar’s dreaded Colombian cartel, and Russo knows he’s made himself a target.

But, as readers quickly learn about Russo, he’s got this covered. Sure, he’s worried about his family, but he’s got connections, smarts, and unwavering confidence in himself. He’ll not only see it through—he might make some money out of the deal, too. Or he’ll at least end up with a good story.

That moment, and its eventual resolution, is Hollywood Godfather in a nutshell. Russo shares stories of varying believability; any obstacles are swiftly defeated with a mix of underworld connections, street smarts, and pure bravado, and Russo ends up coming out ahead—sometimes a little, sometimes a lot.

Russo is best known for his role as Carlo, the abusive and traitorous son-in-law who marries into the Corleone family at the beginning of The Godfather. It’s a part he landed on the strength of his mob connections and his real-life experience as a low-level employee of legendary mobster Frank Costello. Russo’s made the most out of his relatively small part in cinematic history, but readers of Hollywood Godfather will likely be more interested in his career as a Mafia affiliate—there’s lots of mob history. As a boy, Russo began running errands for Costello across Manhattan. As he got older and proved trustworthy, Costello opened up doors for Russo and sent him further afield.

Costello looms large in the book, and though Russo and co-author Patrick Picciarelli are light with the literary touches, the mobster becomes a compelling character. It’s easy to see why Russo latched on to Mr. C., as he calls him, as a mentor, such as when Costello delivers this nugget of mob wisdom:

“The point I’m trying to make here is Italians were treated worse than dog shit when most of the immigrants came over. A lot of that prejudice still lingers today. This thing of ours was started as a matter of survival…to be able to compete. My point is, what we do isn’t all about money. It’s about equality, respect, and power. Never lose sight of that as you get older and become more involved in what we do. Do you understand?”

I got it, and I also understood why Mr. C. had gotten to where he was today. This man wasn’t a thug; far from it.

It’s thanks to his connection to Costello that Russo ends up allegedly having an affair with Marilyn Monroe, playing a small part in the conspiracy to assassinate John F. Kennedy, taking part in an international money-laundering scheme, and dozens of other enterprises both legitimate and not. I say “allegedly” because, well, the fun and frustration of Hollywood Godfather is never knowing when Russo’s telling the truth or just engaging in the sort of bravado that both Hollywood-types and mobsters are known for.

Once you stop asking yourself how much of the book is true, Hollywood Godfather is an absolute blast. Russo is a wealth of anecdotes, from his rocky friendship with Frank Sinatra to a late-night food fight with Liza Minelli and friends. Russo’s life in the mob, the movies, and his later career as a Las Vegas entrepreneur, opened up a wealth of celebrity connections. If Frank Costello is Russo’s surrogate father, then actor Marlon Brando ends up being his surrogate brother. Their initial meeting on the set of The Godfather results in some tension—Brando isn’t happy about working with an amateur like Russo. But Russo, well, he handles it:

The room went silent. I was seething and I didn’t give a fuck who this guy was, I was going after him.

I put my arm around Brando—which turned out to be something you didn’t do, in addition to no eye contact—and ushered him to a corner.

I got right in his face but kept my voice subdued. “Who the fuck’re you to try to do this to me? I’ll cut your fucking heart out, you rat motherfucker. I’m part of this picture whether you like it or not, you cocksucker.” I was this close to decking him. How humiliating would it be if I got dumped, particularly after the massive party my friends threw for me in Vegas?

Brando stared at me for what seemed like a minute.

“What?” I finally said in a threatening tone.

“Man, you’re fucking good,” he said. “I take back what I said. You’ve got great acting chops.”

Russo’s a great storyteller, and there are lots of laugh-out-loud moments like this. Hollywood Godfather also has some unexpected heart, too. Russo lets his bravado slip near the end, and for a few candid paragraphs, he reveals the emotional toll that a life of mob associations and the relentless drive to make a quick buck have taken on him and his family. The book ends on a positive, self-empowering note, but it’s clear that for Russo, all the glitz, glamour, and great stories masked deeper losses, of friends, family, and mentors. That’s what makes the book such a great read—the mob tidbits, Hollywood gossip, and The Godfather trivia supply some sheen, but the real message is that every dream comes with a price. It’s the sort of story Michael Corleone might like if it didn’t hit so close to home.