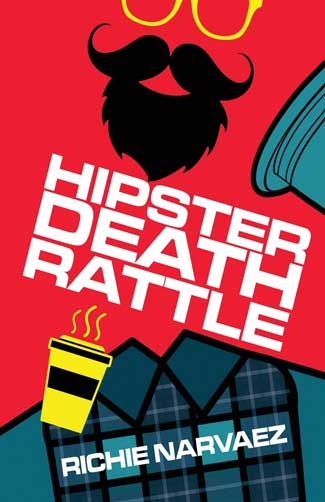 Filled with a cast of colorful characters and told with sardonic wit, Hipster Death Rattle by Richie Narvaez is a fast-moving, intricately plotted debut novel that plays out against a backdrop of rapid gentrification, skyrocketing rents, and class tension in New York City.

Richie Narvaez’s debut novel, Hipster Death Rattle, is a classic case of an author using the mystery form to tell a fast-paced, entertaining story while delivering social commentary. Set in Williamsburg, Brooklyn—an area that any New York City resident will tell you has become synonymous with the words hipster and gentrification—Narvaez tells the tale of a serial killer wreaking havoc on a neighborhood undergoing continual change. Is that change, Williamsburg’s evolution in the last 20 years, a positive thing overall? Well, it would depend on who you’re talking to.

The killer has definite ideas about the Williamsburg of years ago, when it was working-class and affordable, and the Williamsburg of today, a place sleek and trendy and expensive. But a person using a machete to slash his victims in the street is not someone who is going to write to his local city council member to express his views, nor is he going to run for political office himself. You might say the murderer in this book is a social-justice-warrior killer, but he practices a form of activism that is hardly likely to foster a sense of community with anyone else.

Narvaez knows his book’s terrain well. He grew up in Williamsburg and still lives in New York City, and his deep knowledge and understanding of the people who make up the neighborhood is apparent. Hipster Death Rattle has a cast of characters that reflects diversity, but unlike some of the fiction you read where you get a sense that the author is populating his scenes with someone African-American here or Latinx there and forcing diversity on the story in a way that seems calculated, Narvaez presents his motley collection of people with ease. And when you think about it, what is the author doing, in fact, but what an author engaged with the world around him should be doing as a matter of course? In terms of New York’s inhabitants, Narvaez gives us a picture of the city as it actually is. How refreshing.

See also: The Eyes of a Crime Fiction Writer by Richie Narvaez

Tony “Chino” Moran, slacker reporter for the tiny local newspaper The Williamsburg Sentinel, is the novel’s unlikely semi-hero. Tony, born and bred in Williamsburg, has a Puerto Rican background, as does his community organizer friend and ex, Magaly Fernandez. There is Tony’s newspaper colleague Patrick—who moved from his small Pennsylvania town to be a novelist in the big city—veterans of the neighborhood like blond dreadlocked stoner Yogi Johnson, and affluent newbies like the yuppy couple Erin Cole and Steven Pak. The New York City police detectives on the slasher case are named Jimmy Petrosino and Eddie Hadid, and two ruthless landlords who work in partnership are Frank Tomasello Jr. and a Hasidic Jew former college Latin professor named Litvinchouk.

All the characters in the book live at various levels of economic prosperity, or lack thereof, but their home being New York, everyone has a preoccupation with real estate, whether from a landowner or tenant perspective. The Paks live in something called “the Verge—a thirty-five-story glass tower condominium complex … perfectly suited on the waterfront and boasting breathtaking river and city views,” but most everyone else lives in cramped apartments with high rents.

A major plot strand revolves around an old woman, a longtime resident of the neighborhood, who faces harassment from her landlord because she lives in a rent-controlled apartment and prevents him from making a big profit on it. People will go to extreme lengths to gain a livable toehold in Williamsburg, and class tensions are a constant in the novel, though Narvaez brings a waggish touch even when depicting heated gatherings:

To Tony, community board meetings in Williamsburg played out like professional wrestling matches: an uninterrupted series of chest-thumping, sleeper holds, and foregone conclusions. Amid the free-for-alls over affordable rents, new developments, and zoning, and cage matches over club licenses and liquor licenses, everyone understood ahead of time that the tag teams of developers and their political lackeys were going to walk away with the belt. The community organizers and housing advocates knew they would spend most of their time being smacked into a turnbuckle or crushed or twisted on the mat. Still, they showed up to fight. Which was, to Tony’s mind, either very stupid or very foolish. All this action took place at the Swinging 60’s Senior Center, a squat cinder block building on Ainslee Street.

As the plot zips along—with clues planted, clever misdirections, and a richly described trip to Puerto Rico taken by Tony and Magaly—the author never lets us forget that as a city’s character changes and people move to that city because of its opportunities, others bemoan what has been lost. As Magaly says, it’s the cumulative effect of all the loss that hurts:

“Ai, I’m so sad about this place closing. It’s like a kick in the gut. There are so few Boricua food places left around here. I don’t think people understand how emotionally exhausting it is to constantly see your community being knocked down and replaced.”

In New York, it’s the architecture itself that seems to speak, and Narvaez’s characters—typical New Yorkers—understand this. He is adept at dialogue that’s both informative and amusing and that also has a truthful ring. Opinionated city dwellers never lack for comments on the landscape around them:

Tony looked at his empty pint of beer. “Condo developments. They demolish old houses, and on their small lots, they put up these thin buildings that jut above the buildings around them.”

“Yeah,” Yogi said, “so they looked like they’re giving the middle finger to the old neighborhood.” He said this while striking a middle finger in Brandon’s face.

What’s fascinating about Hipster Death Rattle is how, fundamentally, the author seems not to disagree with his killer. The murderer is deviant not so much because of his views on the hipster phenomenon and the gentrification of a once-gritty—read authentic—neighborhood but because he takes people’s lives. In his belief that he can preserve the old Williamsburg, he is misguided. He’s crazy as well, no question. Yet I wouldn’t exactly call him evil.

The author makes clear that, in his world, every single person comes with flaws but has humanity in them too. Narvaez’s method is dialectical, putting into play a lot of ideas and letting them bounce off each other. That he manages to do this while advancing an intricate storyline and keeping the tone funny and light is impressive.