May 2, 2022
Here Goes Nothing is a witty and darkly comic meditation on love, death, and the afterlife from Steve Toltz. Don't miss Doreen Sheridan's review! 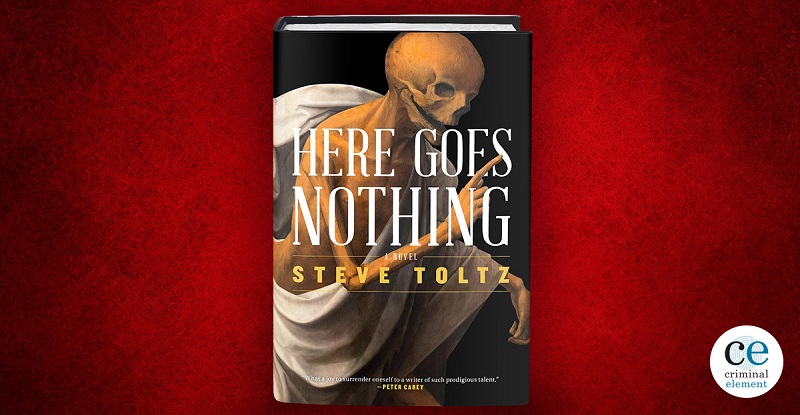 It’s pretty clear from the start of this darkly comic meditation on death and the afterlife that Angus Mooney, our main protagonist, is dead. The kind of juvenile hoodlum who grows up to be only marginally employed, Angus finally finds direction after meeting the beautiful, irrepressible Gracie Adler. The two quickly fall in love and marry. As an unconventional but popular wedding officiant, she brings Angus into her business, setting him up as her videographer. The two make ends meet but fertility issues soon have them needing far more money than they’re currently taking in.

Enter Owen Fogel, the dying man who shows up on their doorstep one day. He tells them that he wants to die in the house he grew up in and offers them a large sum to host him for as long as that takes. Owen seems harmless enough, so Angus and Gracie somewhat reluctantly agree to let him move in and to be his companions as he dies.

But then Angus meets a sudden, violent death himself. As Gracie grieves, Angus discovers that what happens next is far different from any of the cynical beliefs he professed while he was alive. He’d deliberately spurned any and all of the theories that Gracie was ready to accept as plausible, in favor of embracing hard-nosed atheism instead. As he ruefully reflects after dying:

And why was I so convinced that every supernatural belief was just an embarrassing throwback to the pre-scientific age? I had my irrational fears, of course: of mannequins and steep slopes and being stared at, but never of the dark, of the dead, or any kind of afterlife. To me, Heaven was a childish dream, Purgatory an obvious metaphor, Hell credible only on earth, and the very notion of an immortal soul was only a way to avoid facing our immanent trip to Nowhere.

It’s humiliating how wrong you can be.

The afterlife is a bewildering place for Angus, who very much misses his wife. It doesn’t help that Angus is the kind of person who’s inordinately proud of his ignorance, so spends most of his time flailing for survival while declining to seek any guidance. When an exasperated counselor turned confidante decides that what Angus really needs is closure so that he can finally reconcile himself to learning how to cope in the afterlife, Angus discovers that there is a way for him to contact Gracie from beyond the grave.

Unfortunately for Angus and Gracie both, the world of the living has moved on in depressingly familiar ways. A pandemic nips at Australia’s borders, while Owen clumsily woos the bereft and vulnerable widow. Worse, Angus’s jaunts through the veil between life and death only allow him to appear spectrally so that even when he and Gracie can see one another, they can’t actually be heard by the other:

Gracie’s mouth moved in excruciating silence; I could never read lips–or hearts, for that matter. I wished I wasn’t on mute so I could tell her that existence was not a sprint, it was a marathon. Pace yourself. I wanted to say that I was not from oblivion, yet I had travelled through it, and what awaited was worse than reincarnation but better than hell. You still had to floss and eat fibre and read non-verbal clues, and you still wound up using the silent judgement of others to exacerbate your own self-hatred. Basically, we did find out, after all, what it was like to wake up dead. And the whole idea of being ‘put out of your misery’ was totally false; misery endured. But so did love, so did the way I felt for her.

Steve Toltz’s writing is at its most lyrical when discussing love in its various forms, even at its most destructive. Angus’s murder isn’t the only act of criminal violence that occurs in this novel’s tumultuous course of events, as he seeks both retribution and the ability to save Gracie from the cruelties of life and the afterlife.

In many ways, this book reminded me of an adult (and therefore darker) version of Astrid Lindgren’s Swedish classic The Brothers Lionheart, not only in its depiction of what happens after we die but also in the way the central couple was so deeply bonded, albeit in a brotherly way there as opposed to a romantic way here. That said, the inclusion of the fictional pandemic—a grim mirror held up to the world’s handling of COVID-19—along with modern technology and the occasional rant on social issues firmly updates the themes of the older novel for the 21st century. Here Goes Nothing is a thought-provoking work that’s perfect for anyone whose dim view of our planetary existence is tempered by hope in something better than a doctrinaire ending.