Book Review: He Started It by Samantha Downing 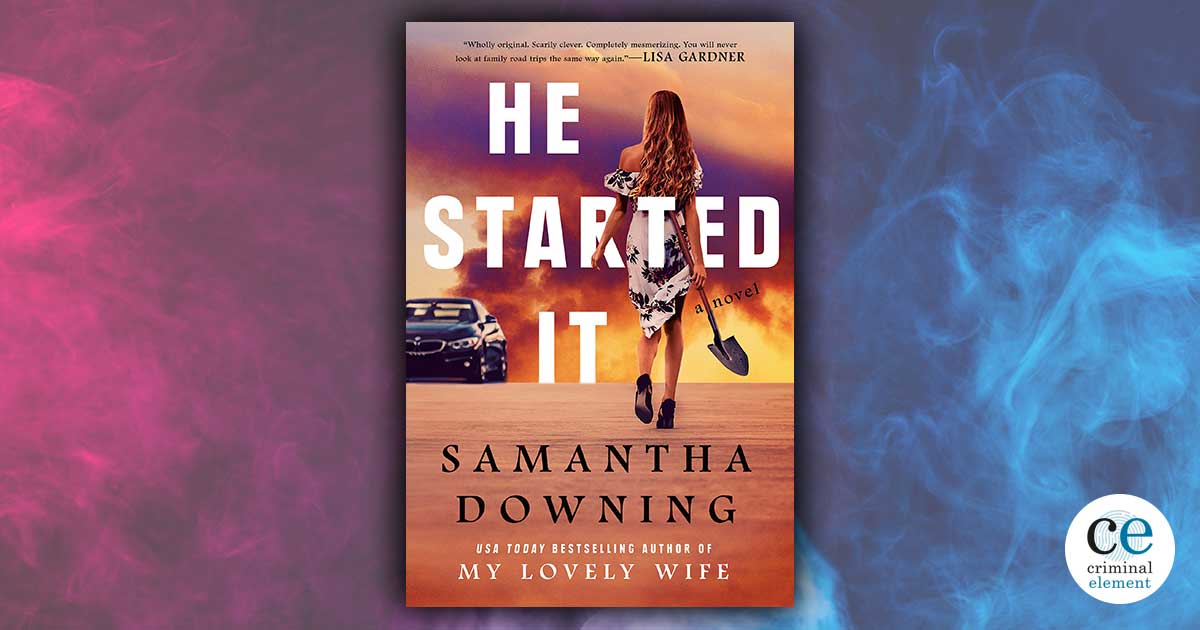 He Started It by Samantha Downing, author of the mega-hit My Lovely Wife, is the story of a family—not unlike your own—with a few more violent tendencies thrown in, all forced to participate in a precarious road trip to secure their inheritance from their recently deceased grandfather.

If you think a long road trip with your family sounds like murder, wait until you dive into these pages! Beth Morgan is our unreliable narrator, the middle child between her handsome, arrogant older brother, Eddie, and surprise baby, Portia. Their grandfather has just passed away, and he wants them to travel cross-country from Georgia—just as they did two decades ago—in order to inherit a sum upwards of three million dollars. It’s a lot of money, even split three ways, and despite the siblings having kept only the loosest of ties, they agree to hit the road once more. This time, however, Grandpa is in a box of ashes in the trunk of their rented minivan instead of behind the wheel.

There’s another significant difference from their prior road trip: this go-round, spouses are along for the ride. Eddie and Krista are newlyweds who haven’t been together all that long, as Eddie abruptly ditched his long-term girlfriend to marry his receptionist. Beth and Felix have been together and married for far longer, which only means that they’ve had much more practice keeping secrets from one another. Portia is single, having graduated from college not too long ago, but she has as much experience as her siblings in lying and manipulation—especially to each other. One could argue that their family dysfunction bloomed in full on their last road trip, as the Morgan kids careened through America with their grandpa. On the plus side, they got to see some really interesting things:

Devil’s Rope is what the Native Americans called barbed wire, and yes, there’s an entire museum devoted to it. That didn’t seem very exciting when I was twelve, but it turned out to be amazing. Barbed wire changed everything.

We learned about how it was used in the nineteenth century, when people could just settle on a piece of land and call it their own. The barbed wire was how people marked their territory, and it also kept the cattle in, otherwise they would just roam around. That’s why cowboys hated it, along with the Native Americans. So many animals died when they walked into it, hence the name devil’s rope.

As the Morgans drive from one bizarre attraction to another, accompanied by their increasingly baffled spouses, strange things start happening. There’s at least one vehicle following them, and odd little accidents befall their minivan as the Morgans plot singly and together how to cope with the memories, real or manufactured, that arise from their experiences two decades ago. There’s a lot of lying, gaslighting, missing persons, and at least one murder—and that’s even before the Morgans come to a reckoning with what they and their grandpa did that fateful summer.

Samantha Downing has knocked it out of the park again with this twisting, whip-smart tale of three messed up siblings trying to secure an inheritance. Enforced family togetherness is always a recipe for drama, and Ms. Downing embroiders upon the premise of the road trip from hell to tell a really clever, expertly crafted tale of deeply flawed family dynamics that are several levels more complex—though, occasionally, just as petty—as the accusatory phrase that makes up the book’s title. As with her terrific debut, My Lovely Wife, she’s written a very human, very sympathetic look at problems that are common to most families, with the unusual complication of sheer sociopathy exacerbating otherwise run-of-the-mill situations.

More so than in My Lovely Wife, however, Ms. Downing turns her critical eye on the kind of society that enables abusive behavior even as it pretends to care about fairness and justice. He Started It is an indictment of patriarchy from its very first pages, even if the p-word hardly ever shows up in print. From Beth’s first declarations, quoted below, to the stunning ending that had me shrieking with consternation, this book stands up for women and their stories.

You want a heroine. Someone to root for, to identify with. She can’t be perfect, though, because that’ll just make you feel bad about yourself. A flawed heroine, then. Someone who may break the rules to protect her family but doesn’t kill anyone unless it’s self-defense. Not murder, though, at least not the cold-blooded kind. That’s the first deal breaker.

The second is cheating. Men can get away with that and still be the hero, but a cheating wife is unforgivable.

Which means I can’t be your heroine.

I still have a story to tell.

Ms. Downing isn’t afraid to get a little metaphysical with the reader, asking us, via Beth, about our own prejudices and expectations from literature and, by extrapolation, the stories and voices we encounter in our everyday lives. That she manages this intellectual exercise in the context of a sizzling summer read is a coup in itself. I love so much that she’s built on the well-deserved success of her first novel to write a wildly entertaining mystery that also encourages readers to interrogate our own roles and responsibilities in shaping the outcomes we want to see. Ms. Downing’s talent as a thriller writer continues to dazzle even as she carves out a name for herself as a literary thinker to watch and admire.