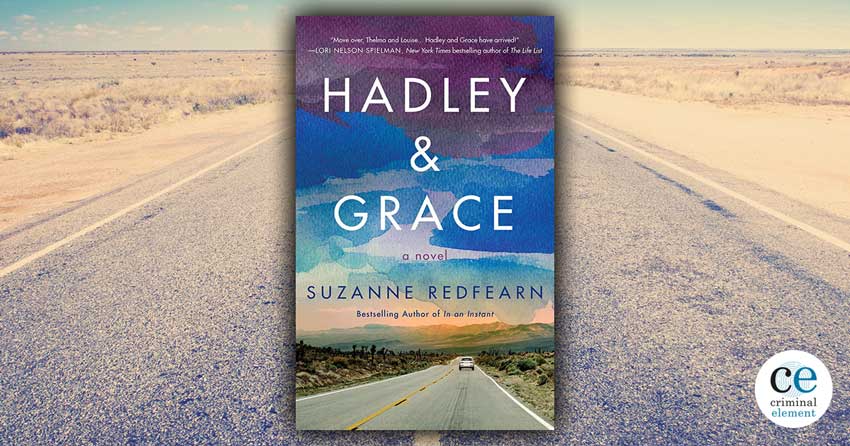 Hadley & Grace by Suzanne Redfearn is a powerful story of self-discovery and the heart-racing tale of two women facing insurmountable odds, racing to stay one step ahead of the trouble that is chasing them, and discovering new kinds of love and family along the way.

Hadley Torelli is an outwardly glamorous 38-year-old stay-at-home mom raising a teenaged daughter, Mattie, and mentally-challenged nephew, Skipper. New mom Grace Herrick is 26 and working hard to escape her dark past and stay on the straight-and-narrow.

The two women have one thing in common: both are struggling thanks to their husbands. In Hadley’s case, Frank is an abusive, controlling monster. In Grace’s, Jimmy may be a soldier with a heart of gold, but his gambling problem has just cost them their rent.

Driven to the edge by desperation, the two women’s lives unexpectedly intersect when they both try to steal Frank’s hidden money—dirty money, it turns out, which is under surveillance by the FBI.

“Please, Grace, who are they?”

Grace’s head snaps sideways to look at her. “How would I know?”

“Because you do. You freaked out when I mentioned their shoes. You know something.”

Grace’s nose flares once; then she exhales and says, “I can’t be sure, but if I had to guess, I’d say feds. Business suits with ugly shoes is kind of their trademark. They were probably watching the money.”

Hadley ignores her. “Someone was watching the money?”

Grace rolls her eyes. “It’s probably dirty. We stole dirty money, and they were watching it.”

“You stole money?” Mattie says, her eyes flicking between Hadley and Grace.

“Blue?” Skipper says, not following the conversation but confused just the same.

“It’s okay, buddy, hang in there.” She looks back at Grace, trying to make sense of it. Dirty money? She’s never even had a speeding ticket, and now the FBI is chasing her because she stole dirty money?

Now, Hadley’s frantic attempt to escape her husband and Grace’s decision to steal a new life has turned them into unwilling partners and the focus of a nationwide manhunt. With three children in tow, the pair becomes a modern-day Thelma & Louise.

Hopefully, their story will have a happier ending…

Hadley & Grace is a novel that defies easy categorization. It’s a crime story, yes, with the ladies’ theft, Frank’s dirty dealings, and the FBI’s pursuit providing much of the conflict. But it’s also a peculiar—and compelling—found-family tale, with the titular heroines and their children banding together under adversity to become stronger and softer in turn. Over the course of a handful of high-adrenaline days, Hadley and Grace each discover who they really are—as women and as mothers—and begin to heal from their personal traumas. Truly, the message at the heart of Redfearn’s novel is that anything is surmountable with the right person at your side and that the right friendship can change the entire course of a life.

This is also a novel that runs the full gamut of emotion, from horror to joy. Redfearn hasn’t flinched away from depicting chilling abuse in a realistic fashion. She makes it clear what’s at stake for Hadley and her kids and why it’s so vital for them to escape, particularly at this moment. Hadley’s sister now wants to reclaim her son, Skipper, and the trip to return him is a prime window of opportunity.

She stops chopping and leans against the counter, the knife trembling in her hand. And now Skipper is leaving. Without Mattie knowing it, Skipper is the one who has protected her.

Yes, Frank yells, says horrible things, has a temper, and throws things. He might even have gone so far as to chop off Mattie’s hair. But he’s never physically hurt her—a mercy bestowed on her by Skipper simply being who he is.

Shortly after Skipper started preschool, his teacher called Hadley and Frank in because she was concerned about something Skipper had said—a strange story about a coach locking someone or something named Blue in the bathroom and not letting them out. Coach of course was Frank, and Hadley was Blue, but the teacher had no way of knowing that.

Frank sweet-talked his way out of it, blaming it on a nightmare and the overactive imagination of a four-year-old, but it was enough of a scare for Frank to realize that, unlike Mattie and Hadley, Skipper couldn’t be controlled—his artlessness as much a part of him as the color of his hair.

From that day on, Frank constrained his violence to the master bedroom, a place children weren’t allowed, which has spared Mattie from the worst of his rages.

When Vanessa called, it was Hadley’s first thought. No! You can’t take him! How will I protect Mattie?

Thankfully, Redfearn balances the upsetting aspects of the story with vibrant characterization and the powerful, positive relationships between Hadley, Grace, and the children. Our heroines are damaged and frightened and desperate, but they’re also deeply kind to everyone they meet—from old ladies to motel clerks to honky-tonk dancers—and very clever, outsmarting the authorities and Frank at several turns.

It’s also refreshing to see a character with an intellectual disability like Skipper in such a story. Inspired by the real-life Skipper Carrillo, the boy has an obsession for baseball, a unique way of expressing himself, and a wonderful dynamic with the teenaged Mattie. Redfearn is careful and respectful when it comes to Skipper; he’s never reduced to an inspirational stereotype or treated as a “magical” trope, as is so often the case in fiction. The other characters deeply love him and are mindful of his limitations and special needs, and his struggles throughout the story are handled with empathy.

Hadley & Grace pulses with energy and urgency, sucking us in fast and carrying us along at a swift pace, making it a fantastic choice for any upcoming book clubs. The central heroines are well worth rooting for; when they cry, we cry, and when they cheer, we cheer. This is a thoroughly enjoyable, cathartic read that rewards rather than betrays the reader, delivering a slightly unexpected but extremely satisfying ending that proves family is absolutely what you make of it.