February 9, 2022
Katherine Faulkner's Greenwich Park is a twisty debut thriller about pregnancy, fleeting adult friendships, and the price of keeping secrets. Fans of Paula Hawkins's The Girl on the Train won't be disappointed. 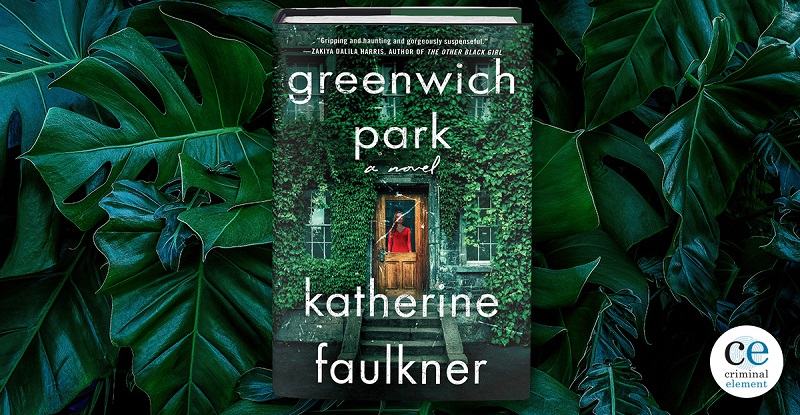 Helen Thorpe lives in the historic home she inherited from her wealthy parents in the beautiful neighborhood of London’s Greenwich Park. Her husband Daniel is partners with her older brother Rory in the architectural firm her father founded. And finally, after four traumatizing miscarriages, she’s twenty-four weeks pregnant and looking forward, both hopefully and fearfully, to becoming a mother.

However, her pregnancy has been difficult almost from the very beginning. Her best friend Serena, who’s married to Rory, is also expecting in the same month but seems to be having a much easier time of it. Helen signs herself, Serena, and their spouses up for birthing classes. But, when none of the other three show up, Helen makes friends with the only other singleton in the class. Rachel, with her loud clothes and make-up and her lax view of healthy pregnancy practices, is not the kind of person Helen would normally befriend. But when the two women keep bumping into each other, Helen reluctantly accepts Rachel into her small social orbit, to the dismay of the other people in it.

For Rachel knows something that could turn Helen’s perfectly conventional world upside down. She’s cagey about it though, not wanting to confide in Helen until she has enough proof. So when an already suspicious Helen discovers hard evidence that Rachel has an ulterior motive for befriending her, Helen flips out, resulting in a quarrel that sees her emphatically ending her friendship with the younger woman.

In the immediate aftermath of their fight, Helen is just relieved not to have to worry about the chaos Rachel brought into her life anymore. But when the police come knocking on her door to enquire about Rachel’s whereabouts, doubt starts creeping into her mind. The day of the quarrel is still hazy for her. She knows she uncovered something incriminating about Rachel but just can’t remember what. This inexplicable haziness is alarming in and of itself even without her family history of depression and dissociation.

Regardless of her confusion, she’s clear on one thing: she never wanted Rachel to come to harm. Now both bereft of and worried over her once-friend—on top of her other pregnancy and mental health concerns—she feels lonelier than ever, and quickly begins to yearn for delivery:

I start to become desperate for it–for the drama of birth, the cataclysm everyone talks about–the end of one part of your life, the beginning of another. Nothing will ever be the same, people say. And that’s what I want, more than anything. To be transformed, to shed the skin of this dead time I am stuck in, with nothing to fill my time but thoughts of Rachel. Thoughts about where she might be, what might have happened to her. And others, that I try to push away. About what I might have done, by sending her away. What I might be responsible for.

Intertwined with Helen’s story are two other points of view. The first consists of Serena’s cooler musings on pregnancy and their relationship, which began back in university when she started dating Rory. Unlike Helen, she finds pregnancy invigorating. Perhaps more importantly, she’s been able to keep up her photography practice, whereas Helen was told to take early medical leave from work. The sharpness of Serena’s faculties, engaged as she is in meaningful intellectual stimulation, stand in stark contrast with Helen’s listless and hysterical states of ennui.

The second viewpoint belongs to Katie, a childhood friend of Helen’s family, who’s dating Helen’s younger brother Charlie. Katie is a journalist who’s been distracted from all the drama in Helen’s life by her latest assignment, covering a rape trial up in Cambridge. The story has been affecting her more deeply than she anticipated. A young woman got drunk at a party then accused two wealthy students of raping her. Katie finds herself unable to get the details out of her head as she makes the solitary drive back to London:

I had hoped it would help me forget about the evidence that afternoon, about the splinters they said they had found under her fingernails. The way she’d looked down at the floor of the witness box, her hair falling in her face, as they’d said it. As if she was the one who should ashamed. And how the defendants, in their expensive suits, just sat there looking bored, or passing notes, or smirking when the jury wasn’t looking. Even when she had told the court how she felt, after it had happened. How she thought she might be better off dead.

The way these storylines intertwine makes for a twisting thriller that explores the many different sides of pregnancy and parenthood, as well as the often fraught nature of adult friendships. Most interestingly, it also discusses culpability, and the cost both of lacking compassion and of maintaining appearances above all else. Katherine Faulkner’s writing is strong in this debut novel that has already earned deserving comparisons to Paula Hawkins’s The Girl On The Train, with perhaps even more insight into the psyche of damaged women and what it takes to heal.