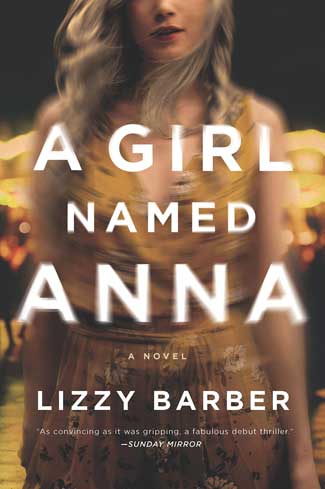 Winner of the Daily Mail First Novel Competition, A Girl Named Anna by Lizzy Barber is a psychologically riveting read that introduces Lizzy Barber as an outstanding new voice in suspense fiction.

British author Lizzy Barber makes her fiction debut with the suspenseful novel A Girl Named Anna. Barber, a former English major from Cambridge University, had concentrated mostly on food prior to this release, as she not only works as a marketing professional for a restaurant but is also married to a food writer. Like myself, I hope you will be glad that Barber ventured into the realm of fiction, as her debut effort is quite good.

We can give thanks to Gillian Flynn—specifically her release of the international bestseller Gone Girl—for making the multiple-character narrative a regularly used gimmick in modern fiction. This works especially well with mystery or thriller novels as they allow readers to digest multiple character perspectives in an effort to puzzle out what is actually going on with the narrative.

One of the pivotal characters in A Girl Named Anna sums up the novel perfectly when she states, “If you had two paths in front of you, one you knew was dark and the other had even the smallest promise of light, which would you choose?” That sounds like a morality lesson of the basest order, and it succinctly sums up how the somewhat controversial choices made by certain characters in this novel have led us down the dual-narrative path towards an inevitable confrontation with both the darkness and the light.

Anna is our title character, and she lives a complicated life. She is alone with her mother, a woman so devout that calling her a religious fanatic would be a huge understatement. Her mother tells her that her father died before she ever knew him. Now, at the age of 18, Anna is finally beginning to seek answers to questions that have always plagued her. The biggest question is why she always feels like she had another past—different from the one she is currently living—and that she may be someone else.

The other narrative comes from Rosie. She lost her younger sister, Emily, 15 years earlier, and she has never stopped believing that she would one day find her again. Even when the rest of her family had given up hope, Rosie continues to use every avenue she can to search for Emily.

The answers may lie in both of their memories of the Florida amusement park Astroland. This was where Emily was abducted—or lost. Anna cannot understand why her mother will not let her go there to celebrate her 18th birthday. As both young women continue to pursue what happened at Astroland, doors will be opened that take each of them down unpredictable paths.

It is difficult to reveal much else without giving too much away. I can say that the novel felt like it could have been wrapped up a little sooner. However, as a debut novel, it was very satisfying. When religion and all the negative connotations that come with religious fanaticism come to the forefront, it reminded me of Stephen King’s debut novel, Carrie, which also had a mother-daughter relationship that was fueled by an unhealthy religious belief. A Girl Named Anna is a gripping read that will make you turn the pages to uncover all the answers the two lead characters are so desperately seeking.