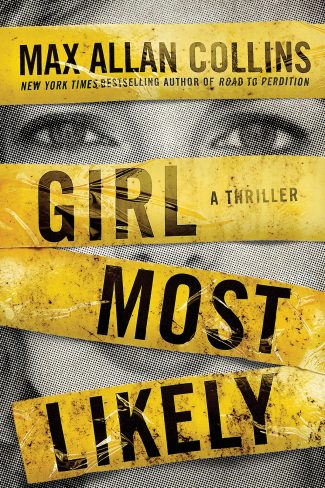 Girl Most Likely from New York Times bestselling and award-winning crime master Max Allan Collins follows Krista Larson, 28-year-old police chief of a small midwest town. Krista braces for more excitement than usual when the town hosts the high school reunion, which is followed up by a triple murder investigation.

Max Allan Collins’ new novel, Girl Most Likely, which kicks off the two-book series that will feature chief of police Krista Larson, is one of those straightforward, entertaining crime narratives that serves as a reminder of how much fun crime fiction can be when it comes from capable authors. While it doesn’t bring anything new to the table, the novel is a smart exploration of small-town American psychogeography and is one of the first books in the genre to tackle the #MeToo movement directly while paying attention at the lingering impact of trauma as well as repercussions.

Krista Larson is only 28 years old, and that makes her the youngest female police chief in the country. She lives and works in Galena, Illinois, a gorgeous small town known for bringing in tourists. Her career is impressive, and she learned what she knows from her father, Keith, a decorated former detective who worked in the next town, Dubuque. Krista’s ten-year high school reunion is coming up and with her entire class staying for free at a beautiful lakefront lodge owned by one of her classmates; the days ahead look pleasant. However, digging into the past is always tricky and soon old grudges, unfinished drama, and resentments start to flare. At the center of most of this drama is Astrid Lund, a tall, gorgeous, and successful TV host who had a knack for stealing any man she wanted back in high school. The one truly dark spot in the reunion is the murder of a former classmate in Florida a few months before the reunion. Unfortunately, that will change violently the day after the reunion. Someone brutally murders Astrid on her bed. The murder sends Krista, with the help of her father, on an investigation that will go much deeper than she imagined. Are the killings related? Was it the same killer? Is there a connection between past sexual abuse, the bloody killing that happened in Florida, Astrid, and Chicago’s organized crime? Krista needs to find answers soon, and her role in the process will grow in ways no one could have expected.

Collins is a talented storyteller and his clean, straightforward style shines in this novel. There are many characters and back stories, all of which collide in one way or another, but the author is always in control and there’s nothing complicated bogging down the narrative. He also manages to keep the suspense strong throughout right up until the end of the novel, which is something rare in contemporary whodunits. Furthermore, instead of keeping the same style throughout, he switches to second person a few times when the killer is in action. These chapters keep the story fresh and add a creepy, bloody element that balances out with the dialogue-heavy portions of the book:

That’s all right with you. You loved this girl once. Maybe you still love her, a little bit. You don’t want her to suffer. You’re pretty sure she doesn’t wake, although her body jerks and kind of convulses when you bring the butcher knife down again and again into her chest.

Their father-daughter relationship is complicated, and that is exacerbated by the fact that Krista is following in her father’s footsteps in law enforcement in a small town.

One thing Collins has a strong handle on is character development. This book introduces readers to Krista Larson, and it does so in commanding fashion. She is multilayered and nuanced. So is her father. The recent loss of her mother/wife brings them together in a special way, but it also puts a painful, negative touch in everything they face together. Their father-daughter relationship is complicated, and that is exacerbated by the fact that Krista is following in her father’s footsteps in law enforcement in a small town. Yes, she is the chief, but has to fight to be seen as so because some older members of the community still see her as a little girl.

While most of the novel moves forward at a nice pace, there are spots where it dips into something not as enjoyable. Collins is obsessed with clothing and describes in minute detail what characters are wearing at all times. This is not a problem at the beginning of the book, but as the narrative progresses, it becomes obvious that the descriptions don’t save a purpose. In fact, when it happens with characters that don’t play a crucial role or only appear once, it becomes bad enough to question the editing process. Here’s an early example:

English teacher Ken Stock, a more quiet kind of handsome but always somewhat dashing, wore a blue blazer with a red pocket square and a white shirt with no tie, while his wife Mary—an art teacher, with short golden-brown hair, brown eyes, and an almost under-control weight problem—wore a navy dress with a turquoise Native American necklace.

The ending of Girl Most Likely comes at readers quickly and with a healthy dose of blood. It mirrors the rest of the narrative perfectly: fast-paced, clear, and with a touch of violence. It also makes readers wonder about comes next while also being a complete, satisfying read. These two things add up to one mission accomplished: making readers put Larson on their radars as they wait for the next book in the series.