Book Review: Four Cuts Too Many by Debra H. Goldstein

May 20, 2021
In the fourth book in Debra H. Goldstein's cozy mystery series, Sarah Blair gets an education in slicing and dicing when someone in culinary school serves up a main corpse... 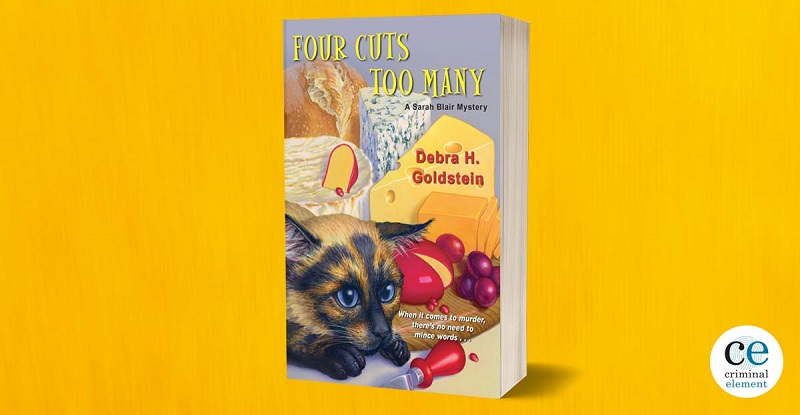 Sarah Blair, first met in One Taste Too Many, is a woman at the crossroads. The unpleasantness of her divorce is firmly in the rearview mirror and lingering memories of her late ex-husband have dissipated. It’s unfortunate that her ex’s lover, Jane Clark, is ubiquitous in the fictional town of Wheaton, Alabama, located in the outskirts of Birmingham. The theme of Four Cuts Too Many is violence, particularly of the unexpected variety.

Went upstairs to get my knife. Made a mistake and stabbed my wife. Sarah Blair hadn’t thought about that horribly worded jump rope rhyme in twenty years. What was worse, she realized, was that most of the jumping rhymes her mother taught Sarah and her twin sister, Emily, had been violent. Sarah doubted the idea of sending children out to play in rhythm to Lizzie Borden’s axe and whacks would be considered politically correct today, but landing on them at the right moment certainly was fun then.

As she waited on the wood bench in front of Carleton Junior Community College’s culinary arts building for Grace Winston to finish teaching her knife skills class, Sarah let her mind wander to some of the other rhymes and scary fairy tales her mother read to the twins. It was better exercise than repeatedly checking the time.

Sarah wished Grace would hurry. She sent her a quick text and waited.

Sarah is always on a tight schedule because she’s a member of the gig economy. She’s a receptionist at a law firm, her sister Emily frequently enlists her to work at Southwind, the restaurant Sarah co-owns, and she’s a pet-mama to two demanding pets—”regal Siamese RahRah and rescue dog Fluffy.” Sarah is also on the shortlist to run fundraising events for the local animal shelter. You would think that would be enough, but her friends put claims on her time. The one thing they don’t ask her to do is cook—unlike her restaurateur sister, Sarah is culinarily challenged. Now, her friend Grace seems very anxious to talk with her.

“Please, can we meet tomorrow somewhere away from the restaurants to talk?”

Sarah had quickly agreed for two reasons. First, it seemed that whatever Grace wanted to talk about was important, but secretive, because Grace obviously wanted to ensure Emily and Marcus didn’t hear what she had to say. Apparently, Grace didn’t equate Sarah as being an equal partner in Southwind because her interest was only tied to the building’s ownership.

Underestimate Sarah at your peril folks—yesterday she spotted Grace walking into Jane’s Place. Jane’s Place is Southwind’s chief competitor in Wheaton and its owner, Jane Clark, is Sarah and Emily’s biggest nemesis, both personally and professionally. Finally, Grace rushes out of the building. Her hand is bleeding, and her apron is speckled with blood. Sarah starts asking questions as she bandages Grace’s hand. Grace really isn’t making sense—she tells Sarah that Dr. Douglas Martin made her cut her hand.

Grace wasn’t the type of person who’d hurt herself because someone told her to. There had to be more to the story.

“Dr. Martin is the new interim chairman of the culinary program. If it gives you a better idea about him, Malevolent Monster is what the faculty calls him behind his back. He’s known for surprise visits and scathing critiques. This morning, he made one of his unexpected visits to my classroom. He shook my students and me up so much, my hand got sliced.”

Sarah is a gifted observer who doesn’t miss a beat. Why was Dr. Martin so unpleasant to Grace Winston? Sarah decides that turmoil-creating Martin is into controlling others. Grace wants to straighten up her classroom, but they’ve barred her from entering.

A man’s body was sprawled spread-eagled over the edge of one of the tables. From the way his arms and head lay, he could have been asleep, but a thin line of blood running down his neck from where a short, pearl-handled knife rested next to him made her doubt that possibility.

The Malevolent Monster won’t be ripping into another colleague. Suspicion immediately falls on Grace—several observers overheard her bitter altercation with Dr. Martin. In Two Bites Too Many, Sarah’s mother was accused of murder. Proving her mother’s innocence was a crash course in how to navigate a police investigation. Wheaton Chief Dwayne Gerard knows Sarah’s propensity to crime-solve on her own so he’s not surprised to see her at yet another murder site. Sarah makes sure Grace lawyers up and then the hard work of tracking down the real murderer begins.

Goldstein deftly presents the precariousness of working in a college environment if you’re an adjunct instructor: you’re a gun for hire with no office and no support. That makes Grace vulnerable to personal observations, like when Martin criticized Grace’s living situation (her partner is female). Grace likes working at the Southwind Restaurant, but she is seriously considering a job offer from unpleasant Jane Clark. Why? Because employment at Jane’s Place comes with health insurance. Four Cuts Too Many is very of the moment, crystallizing the elements that factor into job and lifestyle choices.

For readers who are curious about Sarah’s personal life, it’s in flux. She wonders if her relationship with longtime beau Cliff Rogers doesn’t seem a tad safe. When veterinarian Dr. Glenn Amos asks her out, she’s immediately tempted. Far from juggling the two gentlemen, she forthrightly tells Cliff she intends to re-enter the dating world. Sarah is honest to a fault.

I’m looking forward to learning more about Sarah and her fascinating circle of family and friends in the next Sarah Blair Mystery.