March 25, 2022
The aunties are back, fiercer than ever, and ready to handle any catastrophe—even the mafia—in Four Aunties and a Wedding by Jesse Q. Sutanto, the delightful and hilarious sequel to Dial A for Aunties. 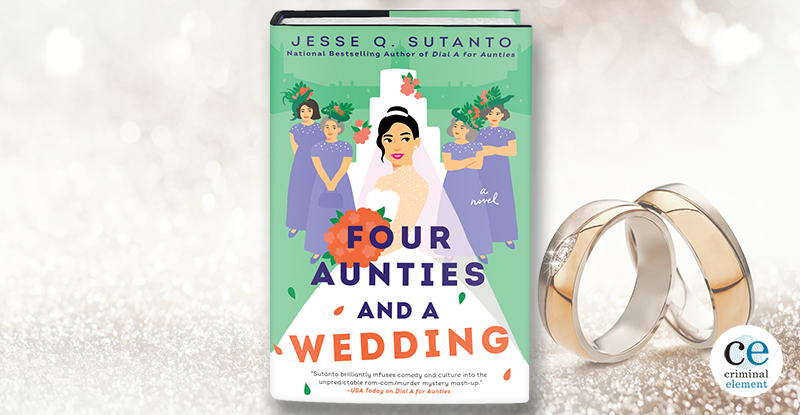 In this second book of the Aunties series, Meddelin “Meddy” Chan is finally marrying the man of her dreams. She and Nathan had been college sweethearts once but broke up and subsequently lost touch. Happily, they were reunited during the events of the first book, and are now set to be married in his hometown of Oxford, England.

Apart from the happy couple, no one is more excited about this than Meddy’s Ma and three Aunts (in order: Big, Second, and Fourth, with Ma herself being third in the sequence.) Meddy is certainly happy to throw the lavish Indonesian-Chinese-inflected wedding they expect, and only partly due to their shared heritage. For Meddy and her family are also all wedding planners, so take a professional interest in making the event as exquisite as possible.

Being seasoned professionals, however, they know that it’s difficult to enjoy a celebration if you’re also the ones responsible for all the moving parts behind the scenes. Thus the Aunties take it upon themselves to find another nice Indonesian-Chinese family of wedding planners to work in their stead. Staphanie Tanuwijaya is, like Meddy, a wedding photographer with an unfortunately spelled name, whose grandmother and three uncles round out the rest of their one-stop service. Despite Meddy’s initial doubts about the Aunties’ choices, she swiftly strikes up a friendship with the sympathetic and capable Staphanie, and agrees to hire on the Tanuwijayas.

At first, the only complications seem to come from the Aunties’ insistence on learning how to dress and speak like “proper” English people so as to better fit in with Nathan’s family and friends. The discount tutor they found online, however, seems to have had rather a different idea of what proper means, as Meddy learns to her mortification when they’re all settling into the plane to England:

“That–no. Second Aunt, that is not what ‘tosser’ means.”

“Yes it is, see here, I got put in my notebook, hmm, where is it…” She takes out her book and flips through page after page of handwritten British slang, muttering under her breath the whole time. “Bugger… bugger off… bugger it…”

“Then what it mean?” Second Aunt says. And suddenly, it feels like the entire cabin is looking at us expectantly.

Nathan falters. “Uh. It means… um.” After an interminable silence where not a single eye in the cabin blinks, Nathan mumbles, “Yeah, you’re right, it means ‘booger.’” The fucking coward.

Fortunately, handling the older generation of four well-meaning women is par for the course for Meddy, even if she is stressing out a little at the cultural clash she’s sure will occur when they do meet Nathan’s straitlaced parents, never mind the strain of the wedding process overall. What finally throws her for a loop, however, is finding out the night before the ceremony that Staph and co are actually a family of criminals using her wedding as a front in order to carry out an assassination. Worse, they have no qualms about blackmailing Meddy and the Aunties into complicity.

What’s supposed to be the happiest day of Meddy’s life is swiftly turning into her worst nightmare. But never fear, the Aunties are on hand to help turn the tables, even if they are more bloodthirsty about it than Meddy anticipated, threatening to kill various Tanuwijayas as necessary:

“Nobody is killing anybody,” I groan.

“Yes, very bad luck, killing someone on wedding day,” Ma scolds Fourth Aunt. “You stop it, you curse Meddy wedding. Later who know what bad luck fall on her marriage? Maybe husband die? Or even worse, maybe no baby, then how?”

“I’m pretty sure having Nathan die is worse than–” Why am I arguing over this? “Never mind. Bottom line: no killing anyone. I can’t believe I have to tell you guys this.”

On top of the usual wedding and family-blending stress, Meddy now has to figure out who the Tanuwijayas are here to assassinate and how to stop them without imperiling either her own beloved Ma and Aunties or jeopardizing her fiance. Will she manage to finally get married without murder marring the proceedings?

This humorous crime caper showcases modern Indonesian-Chinese women and values in a refreshingly endearing way. The dialog was spot on to my Malaysian American ears, and treated with both realism and respect. I did keep having to remind myself to make allowances for Meddy’s “whatever will people think” neuroses throughout, so felt vindicated for sticking by her when she finally has her breakthrough about dealing with the Aunties towards the end.

Jesse Q. Sutanto thoroughly understands how cultures clash even between different Asian diaspora, and it was really nice to see that highlighted throughout the book. I only wish a little more background on the Aunties had been filled in for people who haven’t yet read the first book. Regardless, this was a fun romp with over-the-top but surprisingly relatable characters engaging in and foiling shady dealings in a wonderfully multicultural setting.

Read more: Our Review of Dial A for Aunties by Jesse Q. Sutanto 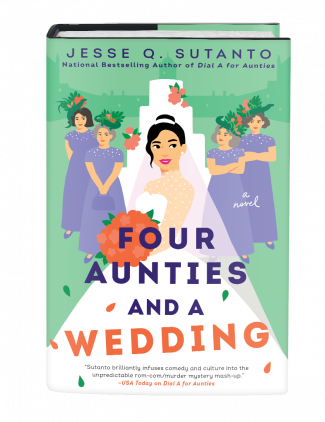 About Four Aunties and a Wedding by Jesse Q. Sutanto:

Meddy Chan has been to countless weddings, but she never imagined how her own would turn out. Now the day has arrived, and she can’t wait to marry her college sweetheart, Nathan. Instead of having Ma and the aunts cater to her wedding, Meddy wants them to enjoy the day as guests. As a compromise, they find the perfect wedding vendors: a Chinese Indonesian family-run company just like theirs. Meddy is hesitant at first, but she hits it off right away with the wedding photographer, Staphanie, who reminds Meddy of herself, down to the unfortunately misspelled name.

Meddy realizes that is where their similarities end, however, when she overhears Staphanie talking about taking out a target. Horrified, Meddy can’t believe Staphanie and her family aren’t just like her own, they are The Family – actual mafia, and they’re using Meddy’s wedding as a chance to conduct shady business. Her aunties and mother won’t let Meddy’s wedding ceremony become a murder scene – over their dead bodies – and will do whatever it takes to save her special day, even if it means taking on the mafia.