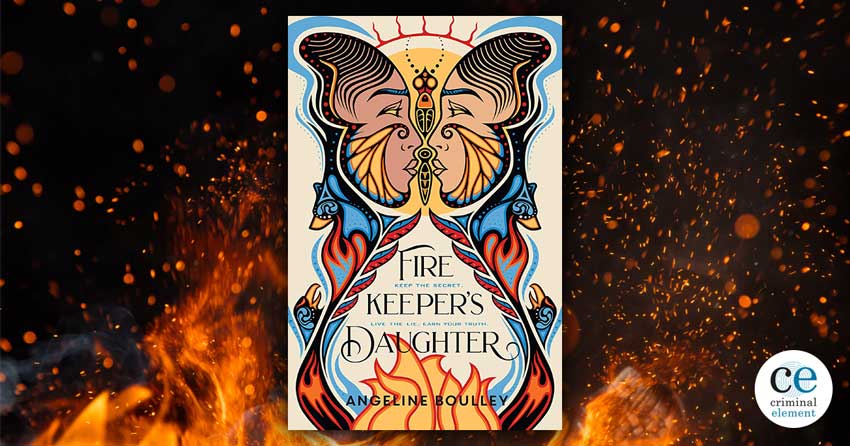 Firekeeper’s Daughter by Angeline Boulley is a debut novel and groundbreaking YA thriller about a Native teen who must root out the corruption in her community.

I ugly cried my way through the ending of this book at 5:30 a.m. after reading all night, which I hope is enough of a recommendation for readers who might be lukewarm on the idea of picking it up due to its Young Adult designation. Firekeeper’s Daughter is a powerful and exceptionally well-crafted look at the life of an 18-year-old Native American woman as she confronts crime within her community. It is easily one of the best #OwnVoices novels, much less thrillers, on the market today.

Daunis Fontaine is a biracial, unenrolled member of the Ojibwe who often finds herself struggling to fit in both in her Michigan hometown and on the nearby reservation where she regularly spends time with her Native family and friends. Her best friend, Lily, is similarly biracial and unenrolled and faces many of the same barriers she does, though from slightly different angles.

Lily’s been my best friend since sixth grade, when she came to live with Granny June. We look like opposites, and not just because of our height difference. I am so pale, the other Nish kids called me Ghost, and I once overheard someone refer to me as “that washed-out sister of Levi’s.” When Lily lived with her Zhaaganaash dad and his wife, they kept her out of the sun so her reddish-brown skin wouldn’t get any darker. We both learned early on that there is an Acceptable Anishinaabe Skin Tone Continuum, and those who land on its outer edges have to put up with different versions of the same bullshit.

Daunis has just graduated high school and decides to enroll at the local college instead of the more prestigious University of Michigan because her grandmother, or GrandMary as she’s known, has fallen ill. Daunis’s mother is doing her best to care for GrandMary, but after the recent death of Daunis’s Uncle Dave, she’s strung more tightly than ever. Deciding to stay in order to help her family seems like a natural choice, plus Daunis genuinely enjoys being an active part of her local community.

When her half-brother Levi asks her to help show around the newest member of his hockey team, the good-looking Jamie Johnson, Daunis is friendly but determined to keep Jamie at arm’s length. Jamie has a long-distance girlfriend, and the last thing Daunis wants is to put him in the position her own dad was in with her and Levi’s moms. But when a drug-related shooting occurs at a party they’re both attending, Daunis finds herself getting much closer to Jamie than anticipated.

As if that weren’t complicated enough, Daunis’s role in the shooting leads to her being recruited to work undercover for the FBI in order to find out who’s making and distributing the drug that’s claimed the lives of far too many of the people she knows. Daunis has a lot of conflicting thoughts on this, not only because of the way federal law enforcement has consistently failed Native people through the centuries but also because of the way the team handling her is approaching the case.

“I know what you’re here to do. But these are good people. Mrs. Edwards started a donation program at my grandmother’s boutique so girls who can’t afford a dress for Shagala or prom can get one. During the last huge snowstorm, tribal police organized teams of snowmobilers to check on every Elder and deliver meals. When the ferry gets iced in, the Tribe offers rooms at the hotel for Sugar Island residents who are trapped on the mainland. I don’t like the way you come into town, turn on a light, and expect to see cockroaches scurrying everywhere.”

It gnaws at me, the way they want bad stuff without knowing the good stuff too.

If the community were an ill or injured person, the FBI would cut out the infection or reset the bones. Amputate if necessary. Problem solved.

I’m the only person looking at the whole person, not just the wound.

Daunis’s decision to uplift her community by, and sometimes in spite of, working with the FBI becomes sorely tested as she digs deeper into the case. Finding out the truth will put her heart in jeopardy and her body in peril, but the alternatives would mean even worse—not only for herself but for her beloved home and peoples.

Angeline Boulley has written a heartbreaking, exquisitely paced page-turner of a mystery novel that genuinely surprised me with many of its clever plot twists. Her observations and insights on Ojibwe culture and rituals are fascinating on their own but coupled with a crime thriller narrative make for utterly compulsive reading. Perhaps most importantly, she shines a necessary light on many of the issues facing Native Americans today—as with David Heska Wanbli Weiden’s terrific Winter Counts, released last year, the depiction of how our country consistently fails this continent’s first inhabitants is both infuriating and deeply depressing. Books like Firekeeper’s Daughter are so important in amplifying the voices of the marginalized in hopes of creating a better, more just tomorrow. Smart, searing, and singular, this novel deserves to be considered an American classic.