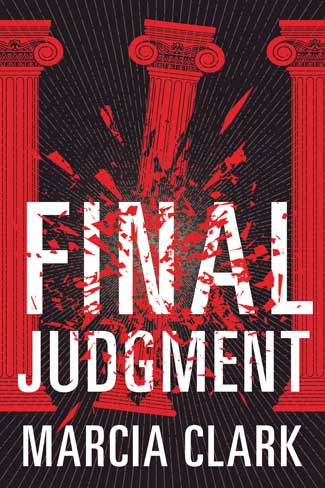 Final Judgment by Marcia Clark is the fourth and final entry in the Samantha Brinkman series, where a murder investigation draws the firebrand attorney into her boyfriend’s past, forcing her to risk everything on a man who could make all her worst fears come true.

Marcia Clark’s name may forever remain synonymous with a certain fallen football celebrity, but she has forged an impressive second act on her own terms that has garnered an enthusiastic readership. Following her 14-year career as a prosecutor in the elite Special Trials Unit of the Los Angeles District Attorney’s Office, Clark—who began her career as a defense attorney—realized her childhood dream of writing books. She made her fiction debut with 2011’s Guilt by Association, which introduced prosecutor Rachel Knight, who would appear in three subsequent novels. In 2016, Clark returned to her roots with vigilante heroine Samantha Brinkman in Blood Defense. The fourth and final entry in that series (and the follow-up to 2017’s Snap Judgment) comes after Clark took a hiatus to concentrate on a variety of television projects.

Final Judgment opens with these prophetic words: “The scene was idyllic. A clear sign that disaster was just around the corner. For some reason, this time, I’d decided to ignore that universal truth.” Sam, a workaholic criminal defense attorney with a tortured past—which includes having been sexually assaulted by one of her mother’s boyfriends and the resultant desire to enact vengeance—has seldom made time for intimate relationships of any kind, let alone romantic ones. So when an exceedingly rare Bora Bora beach vacation with her entrepreneurial martial artist boyfriend, Niko Ferrell, is interrupted by the news that he, his mother, and several friends have taken a huge monetary hit on a “sure thing” investment, she’s not exactly surprised by reality’s intrusion.

The pair hightail it back to Los Angeles so Niko can confront Gold Strike, LLC’s two brokers, Bryan Posner and Tanner Handel. Things go from bad to worse when, in the aftermath of financial ruin, Niko’s mother is crippled by a stroke. Then, Bryan is found dead (of internal decapitation as the result of a rare martial arts move, no less), and Tanner goes missing. Given the circumstances, Niko—who had both the motive and means to commit the crime(s?)—quickly becomes a person of interest. And while Sam vows to defend him to the end (with the help of her “associates”/makeshift family: investigator/hacker extraordinaire, Alex Medrano; office manager/BFF, Michelle Fusco; and LAPD detective/newfound father, Dale Pearson), his lack of transparency arouses her suspicions. But she’s got secrets of her own to keep—ones that could change his entire perception of her—so how can she demand his absolute truth? It’s this very dilemma that lies at the heart of the book.

While the author’s stories typically open with the discovery of a body (or bodies), this one begins with an investigation into a Ponzi scheme and its collateral damage before moving into murder mystery territory. This allows Clark to set the stage for a very personal showdown by bringing Sam and Niko’s relationship—which had been fledgling in previous books—to the forefront.

As always, the pacing is propulsive and the plot twists are plentiful. Clark also infuses her trademark wit and wisecracking, which lends itself to amusing banter between characters. This contrasts nicely with the more somber tone of Sam’s situation: that she must confront, and possibly come clean about, her own past—and demand the same of Niko—if they’re ever going to have a shot at making things work. Of course, her methods are extreme, and extremely unorthodox, but she’d probably argue that there’s no reward without risk—even if it means jeopardizing everything she holds dear.

The book marks a welcome return for Marcia Clark, who is in fine form. Beyond the requisite questions of whodunit and why, she explores the gray areas of morality, where notions of right and wrong lie firmly in the eye of the beholder. A fiery finale to the Samantha Brinkman saga, Final Judgment may not offer closure in the traditional sense of the word, but it certainly brings things full circle. Justice is a construct, after all, and sometimes it needs a taskmaster to help move it along.