August 6, 2021
In the third Ancestry Detective mystery, Camilla Braithwaite hires genealogist Lucy Lancaster to help clear the name of her ancestor and when a member of the Braithwaite family is subsequently murdered, Lucy has no choice but to look into the murders in both the past and present. 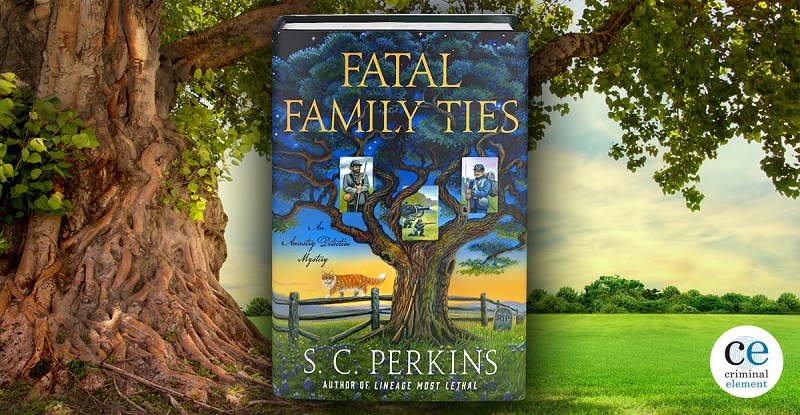 Foodies take note—you will savor the detailed descriptions of dishes from Austin’s favorite Mexican restaurants in Fatal Family Ties. Sadly, due to the pandemic, Big Flaco’s Tacos is closed but perhaps it will rise again in a new incarnation. Genealogist and detective Lucy Lancaster wants to enjoy her carnitas uninterrupted but unfortunately, that isn’t in the cards for her.

I was angling my taco toward my mouth with the speed of the ravenous when a voice made me nearly fall off my barstool.

My taco hit my cheek instead, and juicy pork carnitas began dribbling down the left side of my face.

That Camilla Braithwaite wants her professional help is shocking to Lucy as they were never close when they worked together at Houston’s Howland University library (Lucy as a staff genealogist, Camilla one of three research librarians). However, Camilla needs Lucy’s help this time. Camilla hands Lucy an article from Chronology magazine and tells her to read it. The headline is incendiary: “THE BATTLE OF JUST PLAIN BULL. THE INFLATED LIFE AND CONTINUED LIES OF AMERICA’S LAST CIVIL WAR SOLDIER.” The Civil War corporal mentioned is Camilla’s ancestor, Charles Braithwaite. He is depicted as a phony and a deserter. When Lucy asks why she needs to read the piece, Camilla is crystal clear: “Because I need you to prove it’s not true.”

True, Lucy is a celebrated genealogist and she’s solved some mysteries in the past.  Camilla wants those skills used on behalf of her family but that’s not the crux of why Camilla wants to hire her.

“You say that like it’s a bad thing,” I grumbled, but Camilla went on regardless.

“I saw it when people came in, wanting help with their ancestry,” she said. “You understood how the past could affect a person or their family. That what I need, someone who cares when things are sensitive.”

I blinked. That wasn’t what I expected.

We don’t always see ourselves as others do. Perhaps a genealogist from another part of America might surmise that since Charles Braithwaite was a Civil War corporal, there isn’t much to say about his war record. After all, history is written by the victors. But in Texas things are different, and Lucy Lancaster knows full well how a man comported himself in the “War of Northern Aggression” might very well affect his family generations later. She agrees to take on the case but naturally makes no promises that the Braithwaite family will like the outcome of her research.

Lucy asks Camilla for proof that Braithwaite was an honorable man, not the scoundrel depicted in the article. Beyond the family stories and a few letters, Camilla says the Braithwaite family gave all of their historic possessions to the Harry Alden Texas History Museum for a Civil War display. It’s on display now but the rumors swirling around Charles Braithwaite’s war service might lead to the exhibit being withdrawn temporarily. Rather shame-facedly, Camilla acknowledges another reason she needs Lucy’s expertise.

“But you’re right, preserving that part of his legacy isn’t the only thing that’s bothering me. There’s also someone who’s claiming Charles ruined their family,” she said. “And another person is starting a petition to have the park and elementary school renamed.” She held up the magazine and shook it. “People are starting to use these claims to disparage my family.”

Family Family Ties could scarcely be more prescient—not a day goes by in 2021 when communities don’t have difficult discussions surrounding the Civil War and how it should be remembered today. Camilla describes one last significant Braithwaite family heirloom: a triptych painting that the Alden museum didn’t want.

“Charles made a three-paneled painting of a battle scene at some point after the war ended. It’s a pretty big painting when the panels are side by side.” She held out her arms to their full extent, saying, “About six feet long by three feet high. Charles designed it so his three children would each have a third.”

Lucy is impressed. Unfortunately, one of the panels went missing during a 1988 family reunion, coincidentally the last year the reunion happened. Camilla doesn’t know where it is now but she promises to show Lucy the remaining two panels—her ailing Great-Uncle Charlie Braithwaite (there’s a Charles Braithwaite in every generation) has one and Camilla has the other. As a freelancer, Lucy really can’t justify turning down such a well-paid assignment. Plus Camilla’s story has her intrigued. So much for spending time with her beau special agent Ben Turner.

Lucy is invited to see Charlie’s panel. She and Ben arrive at Charlie’s house, expecting to visit with him and Camilla but when they enter the house, they hear a “keening noise” which turns an all-out wail. How did Charlie go downhill so quickly? When they enter Charlie’s bedroom, Ben asks Camilla why she’s holding a pillow.

“It was on his face,” she said in a whisper. “It was sort of half covering his face when I walked in. I was talking to him, but he never responded. Then I noticed he wasn’t moving. I pulled it off him, and . . .”

A dead body and a missing triptych panel—Charlie’s panel, the second of three, is nowhere to be found. Lucy Lancaster has another genealogical mystery on her hands. One where the past impacts the events and motivations of the present in surprising and sinister ways. Fatal Family Ties is an absorbing mystery that couldn’t be more topical.