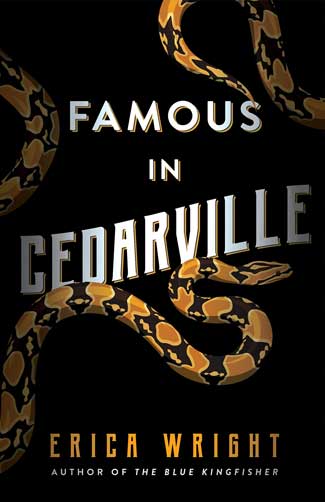 Famous in Cedarville by Erica Wright, author of the acclaimed Kat Stone series, is a standalone novel and a diabolical mystery wrapped in Hollywood tinsel.

Erica Wright, creator of the Kat Stone series, has written her first standalone novel with Famous in Cedarville. Whereas the Stone books are about a former cop turned private detective working in New York City, her new work gives us a central character who serves as an amateur sleuth. She combines a small-town, southern-set murder mystery with a twisted tale of envy and obsession that has its roots in the bygone years of Hollywood. The plot brings two disparate worlds together in an interesting way, and Wright tells the story with an admirable blend of concision and leisureliness.

It all begins in Cedarville, home to a former film actress named Barbara Lace. Town resident Samson Delaware, a recent widower in his 40s who is known not to be a regular churchgoer, gets a phone call from another local guy one Sunday morning to help with a job that needs to be done. That job turns out to be the removal of Barbara Lace’s body from her home; Cedarville’s sole celebrity—who left town years ago at age 18, went west, and made a name for herself in Hollywood—has died peacefully in her bed.

Along with the sheriff and the area undertaker, Samson attends to the sad task and watches the body get driven away. But instead of going home afterward, as you think he would, Samson returns to the actress’s abandoned house and starts poking around. Samson loves antiques and old household objects of all sorts and is a man in mourning, grieving for his deceased wife. So we’re inclined to forgive him in his slightly unbalanced state, a minor trespass.

But then, Samson discovers a second woman inside the house. She claims to have been Barbara Lace’s executive assistant. Her presence there is odd enough, and as far as Samson is concerned, something about the way the actress died seems peculiar. When, in short order, the assistant is shot dead, Samson is certain that his hunch about Lace’s death was correct. She could not have died from natural causes.

He wants to know who killed her assistant and who killed Lace, and he attaches himself, unofficially, to the authorities’ investigations. He has the means to do this, and without his beloved wife beside him, he needs something to occupy his time. He also has a fan’s interest in the life and films of Barbara Lace.

Samson is a calm but dogged person, and after talking to people in gossipy Cedarville gets him nowhere, he flies to Los Angeles, the actress’s world for decades. It is here that he will come into contact with old acquaintances of hers and get to the bottom of what has been happening.

Erica Wright is a poet as well as a crime novelist, and her language in Famous in Cedarville is rhythmical and precise. This is a book that eschews the clichés still too prevalent in crime fiction; there is no bombast or floridness, no sudden immersions into staccato toughness. Wright is especially good at evoking character emotion through lyrical description, and the book is filled with strong passages like this one:

The drive home was too short, and when he pulled into his driveway, the old sorrow returned. Samson wished rather than believed his house was haunted. On the brightest nights, he let the moon swim across his floors and slide into every corner as he hoped for the outline of a figure. Over the summer, he’d slept with the windows open, imagining each gust of honeysuckle was his wife come back. He lit candles so she could find her way home. He prayed for a miracle, cursing God when none came, then he talked to nobody in the dark. His monologues consisted of small talk mostly, how a chair was turning out or whether the Townsends’ baby would grow out of that overbite. He wondered if a creak from the old staircase or a hum from the radiator was her way of saying hello.

She can get down into grimier realms with equal ease; the Los Angeles she presents is as unglamorous as can be. We’re in the City of Angels—learned in an almost offhand way—less than a year after the Rodney King riots, and the city is “as known for its crime as for its award shows.”

Similarly, the side of showbiz Wright explores is bleak; the places that Samson visits present a sad spectacle. We take a trip to a restaurant club where young women fight and bloody each other for the customers’ amusement, and Barbara Lace’s erstwhile agent works in an office that has-beens inhabit.

Three stories of painted, beige stucco that had been peeling for years, decades maybe. The glass on the front door was covered in a thick film, and Samson couldn’t see inside. …A light flickered over the stairwell, and he climbed up quickly, then walked a dim, desolate hallway to Stein’s office. It was hard to believe that he was still in Los Angeles, not an abandoned Soviet nuclear site. Samson tried to imagine the place in better times, fresh paint and photographs on the wall. A few high-backed chairs, perhaps for visitors smoking Parliaments and flipping through the latest issue of Variety. Now only the honking and shouting the street disturbed the feeling of desolation. What sort of Hollywood was this?

If the book has a weakness, it is in its narrative drive. Famous in Cedarville has a plot that takes a while to get where it needs to go. Still, Wright is cunning, and what may seem a little unfocused to the reader has a worthwhile payoff—a twist that occurs two thirds through the book. Clues have been provided, you realize, and from this point until the novel’s conclusion, the momentum is better. There is a rescue at the end that has that too-perfectly timed dramatic act that you find on shows like Murder She Wrote, but maybe it’s a purposeful implausibility, a nod to the kind of films and TV work Barbara Lace herself did. That a person we care about benefits by this kind of contrived escape is in itself rather ironic.

As William Faulkner famously said, “The past is never dead. It’s not even past.” He was referring to history and the American South when he wrote this, but it’s a quote that pertains just as well to that strange isolated land called Hollywood. Some people succeed beyond their childhood dreams there; some don’t attain the stature they hoped for. There are rivalries and resentments and secrets that must be kept.

Within its mystery story, Famous in Cedarville deals with the impact of the past on the present, and Erica Wright provides a full picture. We see those who overcome grief and damage to start life afresh and those who cling to what might have been and take their bitterness to the grave.