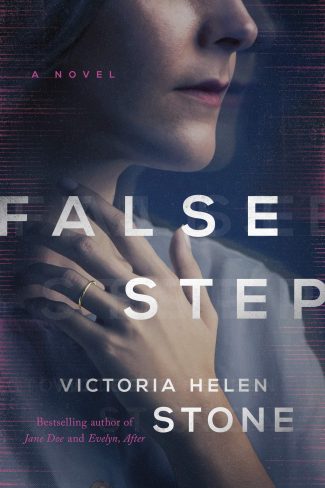 False Step by Victoria Helen Stone urges readers to stay calm, keep smiling, and watch your step—in this marriage of secrets and lies, nothing is what it seems.

Veronica Bradley is a woman barely holding it together. As a physical therapist, she’s the main breadwinner in her small family of three. Her beloved daughter Sydney is ten years old and idolizes the last member of their family unit, handsome, outgoing Johnny Bradley, the personal trainer whose seasonal career path means that the Bradleys are often strapped for cash. Veronica herself is the opposite of her husband in many ways, being an introvert who far prefers reading books to partying with friends.

So when Johnny goes hiking one day and comes across a child who had been reported missing in the Colorado mountains, the press attention is almost too much for Veronica to bear. Johnny becomes a hero, feted in the media, but where he thrives on being in the spotlight, Veronica shrinks from its glare. Perhaps it’s paranoia on her part, but the last thing she wants is for the cracks in her seemingly perfect marriage to be brought to the world’s notice. Superficially, everything looks fine: they’re a good-looking family who owns their own home. But Veronica secretly hates Johnny and feels trapped by the marriage they entered into when they were both probably too immature to decide on forever. Back then, Veronica had thought they could make it work and had striven to model herself after her own perfect home-maker mother:

Was that the world Veronica had been trying to set up for her own life? Had she honestly thought her mother had been happy despite what Veronica herself had known about Dad? Or had she just thought that was the way it was supposed to be?

Whatever her reasoning, she’d jumped into the deep end and let herself sink. She hadn’t realized the rest of her family was getting out of the pool and she’d be in it alone.

As the Bradleys become minor celebrities, the secrets Veronica has been trying so hard to hide slowly make their way to the surface, jeopardizing the fragile facade of her marriage. When troubling information about Tanner Holcomb’s disappearance and recovery come to light, and the police keep knocking on the Bradleys’ door, Veronica realizes that perhaps she isn’t the only one in the family keeping secrets that could tear their lives apart.

It’s fascinating to watch Veronica’s journey as she struggles to reconcile her desire for happiness with her need for respectability, or at least the version of respectability she’s built up in her mind, based on her own parents’ flawed marriage. It’s easy to relate to her as she rebels against being the good girl, the good wife, even when her choices lead her down some dark and scary avenues:

Her whole life she’d assumed she was a decent person, maybe even a good person. She didn’t steal or do drugs. She contributed to society. She protected her child. She drove safely and always wore her seat belt. Heck, her entire career was built on helping people who most needed help.

But this year, at every crossroads, she’d willingly taken the crooked path. She’d wanted that. She’d felt entitled to rewards for all the good decisions she’d made. She’d put in her time. She’d earned her right to do wrong.

False Step is a novel filled with twists and turns that will surely appeal to fans of domestic thrillers. It plunges deep into the psyche of a woman who has denied herself so much happiness that when she rebels, she can barely even admit to herself what she wants or why until the shocking, satisfying ending.