February 11, 2022
Echo by Thomas Olde Heuvelt, follows the aftermath of Nick Grevers' climbing accident in which he suffers from the memory of the accident that has awakened something inside of him. 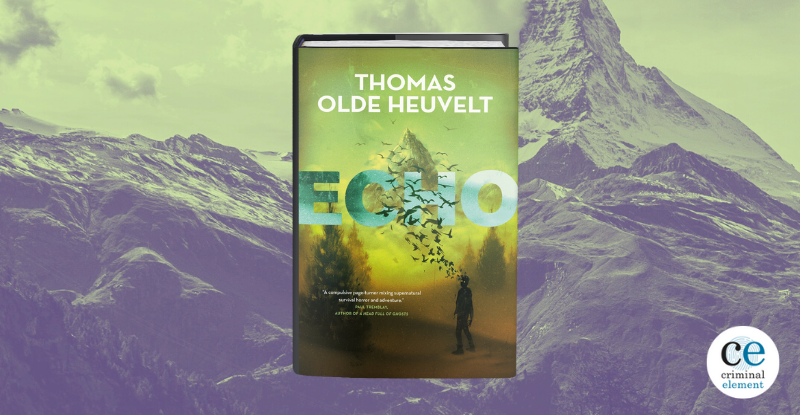 Sam Avery seems like your stereotypical bored rich American expatriate, living in Amsterdam with his partner, Nick Grevers. But he has hidden depths, including a flair for languages that has him working on his master’s degree now that he’s settled down with the man he loves, after spending his first years at university partying instead of studying. The only snag in his perfect life with Nick is the latter’s obsession with mountain climbing, a hobby that Sam finds mystifying, if not outright terrifying.

But Nick is adamant about his mountaineering, explaining perhaps more clearly why in his journals than in his conversations with Sam:

You’ve often asked me why I climb mountains. You’ve also often asked me (I wouldn’t say begged, though it’s not far off the mark) to stop. Our worst argument was about this, and it was the only time I was really afraid that I would lose you. I’ve never been able to fully explain it to you. I wonder if it’s at all possible to fully explain to someone who isn’t a climber. There’s an apparently unbridgeable gap between the thought that I risk my life doing something as trifling as climbing a cold lump of rock and ice…and the notion of traveling through a floating landscape, progressing with utmost concentration while having absolute control of the essential balance that keeps me alive and that, therefore, lets me live. Conquering that gap is possibly the most difficult climb in the life of any alpinist who is in a relationship.

When Sam gets a phone call informing him that Nick has had an accident during his latest climbing expedition, Sam fears the worst, and is initially relieved to hear that Nick is alive though in bad condition. His hiking partner Augustin Laber was not so lucky, perishing on the slopes of the Maudit. The surgeon warns that Nick has had extensive facial damage and will be scarred for life. Sam understands himself to be a somewhat shallow person who places a high value on aesthetics, but even he is taken aback by his own viscerally repulsed reaction to Nick’s disfiguring injuries.

Unable to deal with this, Sam flees back to New York City where the rest of his family lives, including his beloved younger sister Julia. But Nick’s parents eventually persuade him to come back to the Netherlands, asking for help with their now-reclusive son. Gathering his courage and leaning on his own better nature, Sam returns, ready to fight for his relationship. But something else may have a stronger hold on Nick now, something so unnatural and terrifying that it may have already led to the deaths of many others. What will Sam have to do in order to save the man he loves from a force ready to claim them both for itself, a force more than willing to destroy anything or anyone that gets in its way?

This is one of the most startlingly original horror novels I’ve read in a long time, putting its foot on the gas right from the get-go and barely giving you time to gasp for air as it recounts scenes from nightmare, like waking up in an empty house and discovering that you’re not alone:

Julia sees the people in the stairwell when she gets up at night to pee.

They’re standing there in the dark and staring up at her, frozen like a photograph, as if they’ve been waiting for her all along. Her left foot is already on the top stair and she’s about to put her right foot on the next, but her fingers clamp the handrail compulsively, and she stops. Of course she stops, because suddenly it penetrates her drowsy brain: there are people in the stairwell and they’re staring at her.

Thomas Olde Heuvelt plays on these common terrors in fresh ways, cleverly referencing classic horror stories and mythology as he spins his eerie tale. I was genuinely creeped out at many points in the narrative, particularly with the entirely lived-in depictions of both phobias and genuine fears. Fortunately, I had Sam’s perspective and offbeat humor – a coping mechanism we have in common – to help leaven the proceedings. He is a delightful protagonist, a man who presents a wisecracking, cosmopolitan front to the world in order to hide his own unconfessed trauma and guilt. I was genuinely surprised that this was a translated work from the Dutch, so authentically does his voice resonate, as translated by Moshe Gilula.

If you’re looking for a smart, unique horror novel that knows its stuff – the chapter headings are all titles from other exceedingly relevant horror masterworks – then I highly recommend this truly scary book. I can’t wait to read more of Mr. Olde Heuvelt’s work!

Listen to an audiobook excerpt of Echo by Thomas Olde Heuvelt!