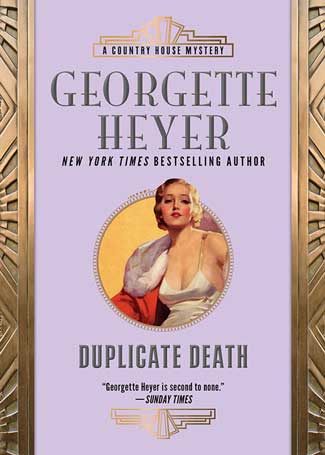 Duplicate Death by Georgette Heyer is the third book in the classic Inspector Hemingway series.

Georgette Heyer lived from 1902 to 1974. She wrote in two genres: historical romance and detective fiction. Heyer was immensely popular; she “wrote 57 bestselling novels over the course of a career that spanned more than 50 years.” Duplicate Death was originally published in 1951. The title is a nod to duplicate bridge, a bridge tournament where every table is issued exactly the same cards, thus making bridge-playing skills more important than chance.

Mrs. Haddington, a well-known “social-climbing” London hostess, hosts an evening of duplicate bridge with 11 separate tables. That night, Mr. Seaton-Carew—a well-known, notorious man about town—is murdered in her cloakroom. The method: strangulation by picture wire. Without giving too much away, there’s an identical murder a few days later. The lady of the house cares only for her position in society and her exquisitely beautiful 19-year-old daughter, Cynthia.

Mrs. Haddington is surrounded by servants, all of whom despise her, although the generous salary paid to her butler and chef ensures loyalty, at least on the surface. Miss Beulah Birtley is her right-hand woman—underpaid, overworked, and taken for granted. Rising barrister Timothy Harte would dearly love to take Beulah away from her hideous job, but he can’t convince his lady-love to say yes to his proposal. There’s a mystery to the downtrodden factotum. Lastly, there’s Miss Spennymoor, “who was known to her many patronesses as ‘a little woman who comes to me,’ […] a small and spare spinster, who eked out a precarious livelihood by trotting cheerfully all over London to sew in other people’s houses.” What Miss Spennymoor doesn’t know about London society, going back decades, is not worth knowing.

Heyer is justly famous for two things: her flair for dialogue and her detailed descriptions. Beulah tells Timothy that they can’t be wed, saying her reasons have “got nothing to do with you.”

‘It has everything to do with me. You have plighted your troth to me, my girl.’

‘Then I shall sue you for breach of promise. Why, by the way, have you had this sudden change of heart?’

‘It isn’t possible. I must have been crazy! I can’t think why you want to marry me!’

She muttered: ‘Yes, you told me. That’s what I – what I don’t understand! Why should you?’

‘Oh, I shouldn’t worry over that, if I were you!’ said Timothy kindly. ‘Of course, if you insist, I’ll enumerate the various things which attract me to you, but they really haven’t got much to do with it. To be thoroughly vulgar, we just clicked. Or didn’t we?’ Her face quivered; she gave a rather convulsive nod. ‘Yes, but -’

‘There you are, then. You know, for an intelligent girl, you say some remarkably stupid things. You’d be properly stymied if I asked you what you saw in me to fall in love with, wouldn’t you?’

A flicker of humour shone in her eyes. ‘No, I shouldn’t,’ she replied. ‘Anyone can see what I fell for at a glance! Exactly what about fifty other girls have fallen for.’

Timothy is so reminiscent of Heyer’s historical Regency heroes: insouciant, intelligent, light-hearted, and a lovely pair of shoulders for Beulah to lean on, if only she would. If she was holding back before, she becomes even more reluctant to lean on Timothy after she’s a suspect in Mr. Seaton-Carew’s death. Inspector Hemingway, of Heyer’s eight-book Hannasyde & Hemingway series, heads up the investigation.

Heyer’s attention to detail transcends mere description. Mrs. Haddington’s house on Charles Street is “distinguished internally, according to young Mr. Harte, by an absence of individual taste which made it instantly remarkable.”

Nothing in the furnishing of its lofty rooms suggested occupation. From the careful arrangement of expensive flowers in the various bowls to the selection of illustrated periodicals, neatly laid out on a low table before the drawing-room fire, the house reminded the visitor of nothing so much as an advertisement of some high-class furnishing emporium. Sofas and chairs of the most luxurious order were upholstered in the same material which masked the tall windows, and were provided with cushions which, embellished with large tassels, were exactly placed, and incessantly plumped up, either by her butler, or by Mrs. Haddington herself.

We know so much about Mrs. Haddington after reading the above passage; her visitors are meant to see a “high-class” drawing room, but her frantic, “incessant” plumping of “exactly placed” cushions, reveals her insecurity.

The television series Murder, She Wrote relied on a satisfying formula: “Clues were carefully dropped. A murder was committed. Jessica moved into action.” Substitute Inspector Hemingway for Jessica and note that the clues in Duplicate Death are carefully embedded in conversations and descriptions.

After all is revealed, one is tempted to do a reading “flashback showing where a mistake had been made,” as was the custom in Murder, She Wrote. Georgette Heyer carefully delineates a world that is foreign in many ways to life in the 21st century, but the passions that motivate people are timeless. Acting out of loyalty and/or fear will never go out of style—which is also true of the detective novels of Georgette Heyer.