September 2, 2020
In Dane McCaslin's Doggone Dead, retired high school teacher Gwen Franklin has a new pet valet business with her BFF, and a whole new leash on life. But a killer is about to come sniffing around . . . 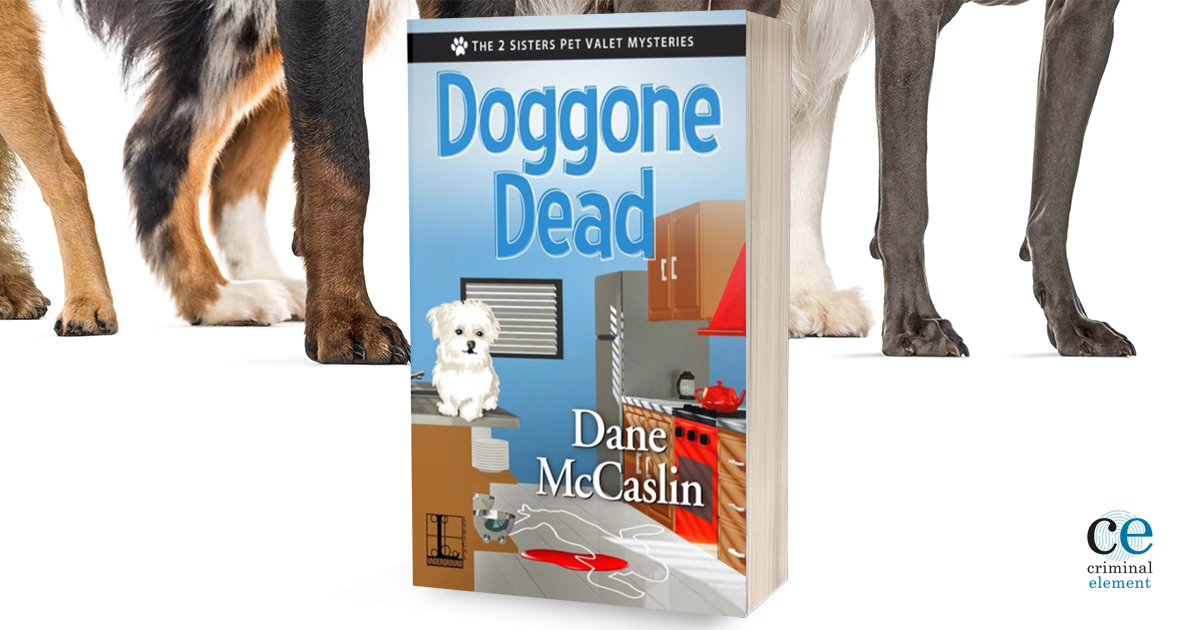 It’s the first day of Gwen Franklin’s new life. Goodbye career as a high-school English teacher, hello early retirement. She has plans that don’t include being woken up by Nora Goldstein, her best friend from kindergarten and her sister-from-another-mother.

“What do you want?” I sounded as surly as I felt. I’d been looking forward to this first late morning from the moment I’d announced my intention to retire early from a wonderful but exhausting career as a high school teacher. I wanted to sleep in, get up and have coffee, and go right back to bed, preferably with a book. “This had better be really good.”

“And a good morning to you too, Gwen.”

Persistent Nora tells her “bestie” that she has a fabulous idea to share.  Oh no, thinks Gwen but Nora can back up her notions: “What Nora lacked in common sense, she made up for in dollar bills. As in millions of them, all tucked securely away in various banks, thanks to a rather extensive lineup of ex-husbands.” Nora tells Gwen to be at “The Friendly Bean in one hour sharp.” In Portland coffee is so much more than a beverage, it’s the liquid that fuels everyone’s engine. Gwen hoped to work her way through her “extensive collection of mysteries, beginning with the dame herself, Agatha Christie,” but Nora is not to be gainsaid. She’s waiting for Gwen, dressed in her usual “decades too young” style and wearing “more is better” makeup. What an Odd Couple. At least Nora ordered Gwen a cup of Joe.

I sighed, shook my head, and took another tentative taste of my coffee. Good to go. It was a real woman’s drink: dark roast, black as ink, and guarantee to put hair on my chest. As if that would even matter. I glanced at my unshaven legs, where they poked out from a pair of old denim capris, scratchy with stubble and white enough to use as nighttime beacons in the harbor. Retirement chic in all its glory.

Nora wants them to start the 2 Sisters Pet Valet Services. With Portland’s inclement weather, pet owners will jump at a chance to have someone else walk their darlings and scoop up the poop. Before they can whip up business cards, there’s a spanner in the works: how could they have anticipated “finding Linda Fletcher’s very dead, very murdered body in Nora’s kitchen?” Gwen is a mouseburger but not a pushover. She stands up to the police who seem to think Nora is the murderer.

I drew myself up to my full height of five feet nothing, my chin jutting out like the bow of a ship sailing full tilt into harbor. “I had nothing to do with it and neither did Mrs. Goldstein. And you can put that in your pipe and smoke it. If you smoke, that is. Personally, I’ve always found it to be a disgusting habit.

I shot Nora a triumphant glance, ignoring the stifled snort of laughter coming from one of the officers. My brilliant repartee would send them packing, their proverbial hats in their hands. This would be even better than Holmes and Watson or Poirot and Hastings. Franklin and Goldstein—another dynamic duo, Portland style.

“Yeah, yeah. That’s what they all say.” The detective motioned impatiently for Nora to step into the hall, rudely imploding my dream.

Will the vintage mysteries Gwen loves, which fuel her mystery-solving dreams, provide a mystery-solving roadmap? Gwen does have the gift of thoughtful observation, honed over many years in the classroom. She has an inflexible retirement budget so if she and Nora are going into business, they need to take it seriously. Before finding a dead body in the kitchen, they already had customers lined up. Who’s going to walk the dogs if the ladies are at the police station? Time to out-source and embrace the gig economy.

Brent Mayfair had been a mediocre student but a sweet kid, always anxious to include everyone in whatever class project we had going on at the moment. No one had had a bad word for him, except for the football coach, and even then it was full of regret.

“That kid is built like a Mack truck, but he’s got instincts like a teddy bear made from marshmallow,” Coach Freeman had said.

If being “too nice” is an automatic cut from a football squad, being a ‘Ferdinand’ is a plus for a pet walker. Nora is sure they can easily afford Brent and as they discover, he enjoys inhaling part of his salary (not that kind of West Coast inhale, rather treats that come in pink boxes: Voodoo Doughnuts!). Nora, Gwen, and Brent cement their business relationship over some favorites.

When we were all seated, each with fresh mug of coffee and a donut—I had a Bacon Maple Bar and Nora chose a Homer, its strawberry icing covered with candied sprinkles—I nodded at Brent.

“Okay, let’s hear it. What did you learn last night?”

Brent took a big bite from his Grape Ape donut. “Well, she told me that—”

“Hold up there.” Nora held up one hand. “Swallow the donut first, please. I really don’t want to see a train wreck in a tunnel.”

Gwen’s former student mafia includes Rachel, now a journalist who can access the details of Linda Fletcher’s post-mortem. Turns out Linda died from poison, not stab wounds. Nora is off the hook—but who killed Linda?

Doggone Dead is a great premiere to a new cozy series: its characters are original and evolving, and the Portland location is played up beautifully (omnipresent misty rain/coffee shops/glorious mountains—the town is a character). I’m looking forward to learning more about Gwen’s infallible teacher-techniques, and seeing how she channels Miss Marple as she solves crimes with Nora, her sassy, irrepressible side-kick. Doggone Dead will whet readers’ appetite for The 2 Sisters Pet Valet Mysteries sophomore offering, Cat’s Meow in 2021.