Book Review: Dial A For Aunties by Jesse Q. Sutanto

April 28, 2021
What happens when you mix 1 (accidental) murder with 2 thousand wedding guests, and then toss in a possible curse on 3 generations of an immigrant Chinese-Indonesian family? You get 4 meddling Asian aunties coming to the rescue! Read our review of Dial A for Aunties by Jesse Q. Sutanto! 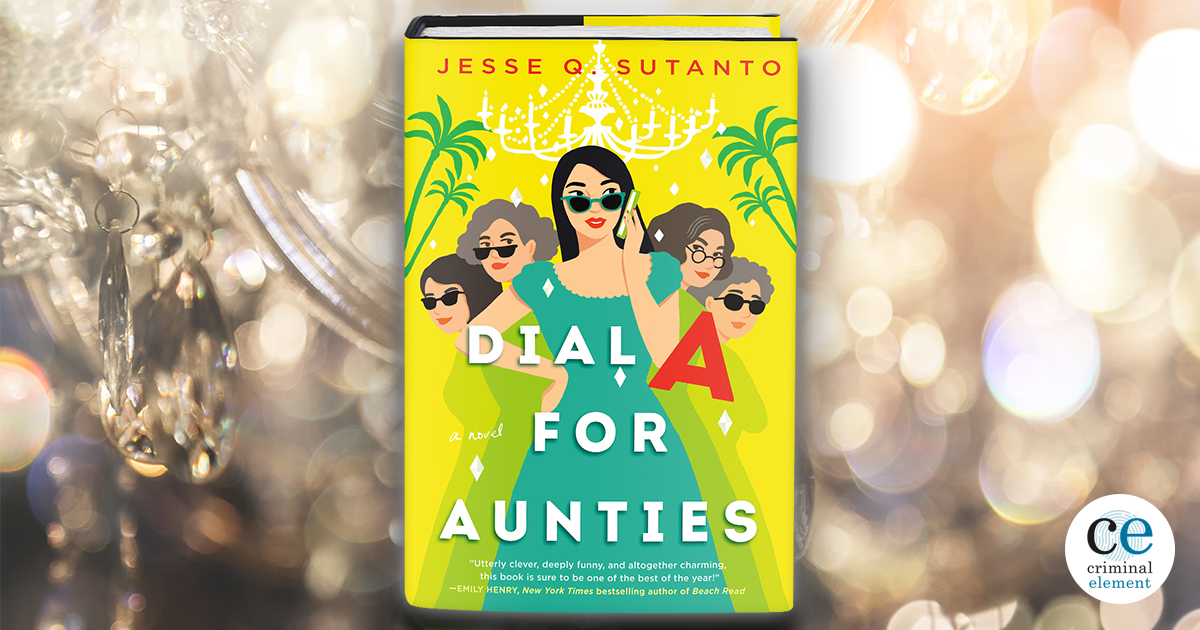 What a debut—Sutanto has whipped together a frothy mixture of “murder mystery, rom-com, and a celebration of mothers and daughters.” Meddy has not one but four mothers, her ma and her three aunties (which rhymes with Ant). She is the embodiment of “filial piety, the foundation of Asian parenting.” These loving, interfering, outspoken women shower Meddy with advice, instructions, and directives, in three languages no less. Dial A for Aunties is a “deep dive into Chinese-Indonesian culture,” in San Gabriel, LA. Meddy’s name, Meddelin, exemplifies the influence of the Chinese-Indonesian culture into which she was born where it’s de rigueur to name children after “famous people and/or brand names” (like her cousin Gucci).

My parents were aiming for Madeleine. Growing up, my cousins called me Meddlin’ Meddelin, which is why I never, ever meddle in anyone’s business, ever. Well, that and also the fact that my mother and aunts meddle enough for the whole family.

Meddy’s six cousins have escaped, but not her. She applied to eight Californian schools, including Berkeley, anathema to her mother: how can she “drop by randomly and clean my dorm and nag at my roommate to go to sleep early and drink lots of water.” The aunties are the original helicopter parents. They were so pleased that Meddy went to UCLA—after college, according to their game plan, she’ll be her ma’s forever companion, a prospect that she finds chilling.

Is it true? Am I doomed to stay with them forever, just because I’m the only one not heartless enough to leave? I force a smile and nod benignly as they fuss about me, and I try to look forward to the rest of my life, living here in the same house with my mom and aunts.

Flashback to the love of Meddy’s life, Nathan Chan, her college beau. She refused to risk introducing him to her ma and aunts. He asked her to accompany her to New York City after graduation: he’ll work for a famous consulting company and she can pursue her dream of becoming a photographer. Nathan is so tempting: “It’s a great city for photographers. You’d have your work in galleries, Meddy, I know it. You’re brilliant.” Meddy breaks two hearts when she rejects the adventurous life Nathan offers and joins the company wedding business instead, as a photographer. Her decision is “slowly eroding” her pleasure in the art of playing “around with different lenses and lighting and angles.”

I hate that the documenting of my family’s hard work—Big Aunt’s towering cakes, Second Aunt’s complicated hairstyles and flawless makeup artistry, Ma’s gorgeous flower arrangements, and Fourth Aunt’s dynamic performances—all falls on my shoulders. Every wedding, I try to capture everything, and every wedding, I miss something. Last wedding, I forgot to take pictures of Fourth Aunt from her “good side, the one that makes me look twenty again,” and the wedding before that, I failed to capture the centerpiece at table 17, which was apparently significantly different from all the other centerpieces.

The aunties need a magician, not a photographer, but as has been established, Meddy is “basically driven by a mixture of caffeine and familial guilt.”

The two billionaire families marrying their progeny in “one of the most luxurious, exclusive resorts in the world—the Ayana Lucia,” are thrilled to hire the Chans. Jacqueline Wijaya’s family own the “largest textiles company” in Indonesia and her groom, Tom Cruise Sutopo, comes from an equally rich family.

I thought that our cheesy-as-hell company motto, which Big Aunt is supremely proud of—Don’t leave your big day to chance, leave it to the Chans!—would’ve scared away the bride and groom, but they actually found it funny. Said it made them even more certain that they wanted to hire us to cater their big day.

Before the big shindig on Santa Lucia Island (a mythical resort off the LA coast), Meddy has a blind date with Jake, a date arranged by her ma. The aunties have no boundaries: Ma pretended to be Meddy, stole her cell phone, and impersonated her online. The date doesn’t go well. Jake puts the moves on Meddy and won’t take no for an answer, so she pulls out her stun gun, kills him, stuffs him in the trunk, and then drives home. Sutanto’s plotting infuses madcap and mayhem with steroids! The aunties aren’t the least bit phased by the corpse. It needs to be hidden: Second Aunt recalls her son Hendra’s huge ski bag—“I always think, wah, can fit me inside that bag.” What about a trash bag?

“We’d have to cut him up first,” Fourth Aunt says, her eyes shining with, again, what I can only describe as horrified glee. Has she always been this murderous? Have they always been this blasé about chopping bodies up?

“Such silly idea,” Ma scoffs. “So messy, and the garbage bags always leak. You will make big mess in my garage.”

“That’s because you always buy the cheap ones,” Fourth Aunt shoots back. I told you to buy Glad brand.”

Clearly product placement won’t be a problem if Dial A for Aunties hits the silver screen. Ultimately, they put Jake in a cooler in Big Aunt’s bakery. The aunties decide to take Jake with them to the island wedding extravaganza where they’ll have better luck disposing of him. But the cooler is already on the yacht that’s taking them to the island of Santa Lucia. Meddy is worried about her aunts’ antics.

Ma sighs, “I spend so much money on Chinese class for you, all wasted.”

Before corpse disposal, there’s a wedding to get through. Guess who owns the resort? When Meddy hears a “smooth, rich voice that can only be described as molten chocolate,” she knows it’s “the one that got away,” Nathan Chan. When their eyes meet, it’s clear that there are still major sparks.

Hold on, there’s still a dead body. When they open the cooler, Ma screams, “EH! THAT MY LILY GUY!” And this time the corpse—Ah Guan, Ma’s lily guy—is truly dead. Meddy is distraught: “Ma, I’m so sorr __” “Who am I going to get my lilies from now?” With that, we’re in Weekend at Bernie’s territory.

Have you been missing Crazy Rich Asians? Are you despondent that Crazy Rich Girlfriend (the highly anticipated sequel) is far off on the horizon? Dial A for Aunties is a fabulous alternative and “Netflix has gotten the film rights to Jesse Q. Sutanto’s, an Indonesian author, debut book titled Dial A for Aunties.” How exciting: everyone will fall in love with Meddy and her meddlesome, marvelous aunties. Let the parlor games begin—who should play the aunties?

N.B. If the book title seems familiar, Dial M for Murder was a play by English playwright Frederick Knott that was turned into an unforgettable 1954 movie.

More: On Injecting Humor Into A Story About Murder by Jesse Q. Sutanto