July 20, 2022
In Bryan Johnston's Death Warrant, a struggling stage performer/mentalist agrees to be assassinated on the most popular television show on the planet. Once she signs her life away, her memory is wiped clean of the agreement, leaving her with no idea she will soon be killed spectacularly for global entertainment. Read on for Doreen Sheridan's review! 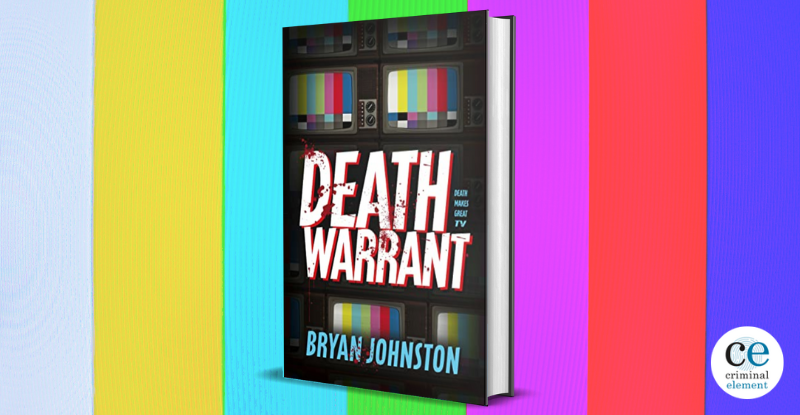 A handful of decades in the future, the most popular television show in the world is a reality program called Death Warrant. In every irregularly scheduled episode—the date and time of which are sent out only hours beforehand in a social media blast—one unsuspecting person is executed on live TV. This person, of course, has previously entered into a contract with the production company behind the show, accepting a vast sum of money for their heirs in exchange for being the target of a televised assassination. Then their memories are erased so that they don’t remember approaching the studio at all.

For the next few months, the subjects of Death Warrant go about their lives as usual, as the production team plots their sudden demises and builds sympathetic story packages around them. The show is, of course, ratings gold, despite the murky morality of its premise:

It’s the most binge-watched program in history. I don’t remember when we as a society became inured to death. It was a slow process, creeping up on us over decades, but when Death Warrant aired for the first time, the reaction was sweeping and instantaneous. You would think there would be some part of civilization, some faction who still held life in high regard, but if they existed, they didn’t make their presence felt. Who knows, maybe this show would have been a hit fifty years ago and we didn’t realize how emotionally dead we were until some hot shit pitched the idea to a network executive.

Our narrator is Frankie Percival, a struggling mentalist whose younger brother Galen suffered irreversible brain damage in a car accident just a few years earlier. Convinced that this is the only way she can ensure that he’s given the care that he needs to live out the rest of his life in dignity, she decides to sign up for Death Warrant. It’s not like her life amounts to much otherwise, or so she believes.

Perhaps ironically, the woman conducting her psychological evaluation for the television show doesn’t feel quite the same way. Frankie, though, is excited to think that that she’ll finally be able to earn enough money to take care of Galen, asking:

“I can’t tell you at this moment,” says Myrna. She really does look sad. “All I can say is that I will recommend that you would most likely draw an excellent audience. Your backstory, your personality, your profession, it all adds up to a likely ratings winner.” Myrna pauses a moment to remove and polish her glasses. She looks back to me. “In the world of reality television, it’s all about the personalities. Compelling personas drive the numbers. I’ve been doing this for some time now. I’ve learned that I’m quite good at knowing what the viewing public likes, and you, my dead, they will like very much.”

Once the interview is over, Frankie, like all the other candidates for live assassination on Death Warrant, has her memory wiped. But then a funny thing happens: She catches a lucky career break, performing for and impressing a wealthy local tycoon who wants to hire her for future gigs. She also meets a cute guy in a cafe, and her best-friend-for-hire starts to feel like more of a real friend than a paid companion. Most meaningfully of all, Galen starts to show signs of improvement. Frankie soon has everything to live for, oblivious to the fact that each day could be her last as Death Warrant’s timer ticks inexorably down to what could be the greatest performance of her life.

This was a really absorbing thriller that examines the morality of reality television—unsurprisingly finding it lacking—while presenting a sympathetic portrait of the people desperate enough to succumb to its siren song of wealth and fame. Frankie is as charming and sympathetic a protagonist as Myrna says, even as it becomes clear pretty quickly that Frankie isn’t your average reality TV star. As a mentalist, she’s used to sussing out what makes people tick and using that to her advantage, which leads to several of the more important twists in this story. I was rooting for her throughout, and ultimately found this to be a deeply satisfying tale that compellingly depicted both the magic of stagecraft and the power of good people coming together to affect meaningful change.