March 2, 2020
The second in the Penelope Kite series, Death in Avignon is a light and charming jaunt through the picturesque French countryside, with just enough bite to give the climax a frisson of danger and surprise. 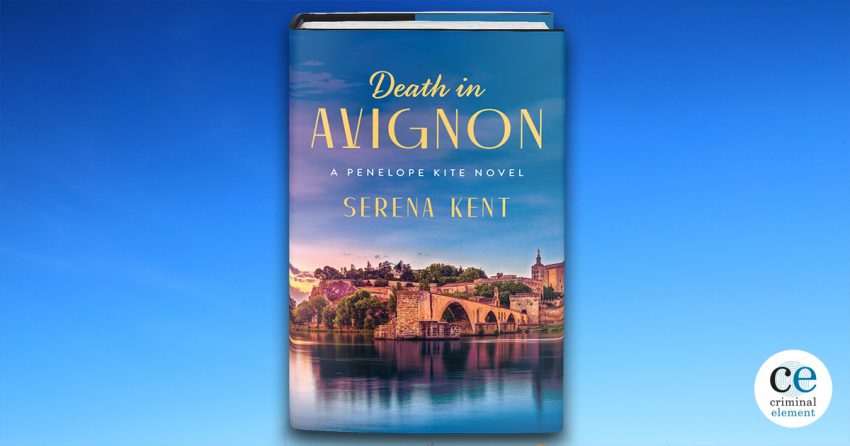 Charming divorcée Penelope Kent is finally settling into her gorgeous new home in Provence. The English transplant’s first few months in the countryside were fraught with murder, but now she’s looking forward to finishing the renovations on her house, picking up the cello again — and romancing the handsome mayor of St. Merlot.

But Fate has other plans for Penny. When she and the mayor attend an art show, disaster strikes when one of the painters, ex-pat Roland Doncaster, collapses dramatically.

At the entrance to the gallery and outside on the cobbled street, a large crowd milled around anxiously. The art critic hovered by the door, as if wondering whether he ought to be making the most of a bad news story. A few women sobbed in each other’s arms.

Snatches of conversation flew back and forth.

“They’re saying he started choking. Then he went red and fell forward. What a terrible thing to happen.”

“What if he dies?” someone else said. “Do you think his paintings will rise in value? They usually do, don’t they?”

A loud, heavily accented Spanish voice — speaking in English — cut in behind her.

“Therre h’are of course some artists whose death leaves a hole in the warp and the weft of our cuulltural tapestry. Such artists will rise in value as the time goes by. But I would not count Mr. Doncaster in that group. He fulfils a need, that is all.”

Penelope turned to identify the source of the voice. Standing a few paces away was Keith Richards’s double, the genius behind the sequence of black works. It really did not seem right to be discussing his fellow artist like this, and Penelope shot him a black look she was sure he would have no trouble interpreting.

The commercially popular but critically reviled Mr. Doncaster proves to be a polarizing figure. An unashamed womanizer, he left behind a string of conquests, any one of whom may have taken their jealousy to a deadly conclusion. His fellow painters despised his shoddy work, yet he was gallery owner Gilles’ golden goose.

Is his death the result of jealousy and anger? The work of a scorned wife or lover? Someone’s attempt to make his art more valuable? Or is something bigger playing out behind the gallery scenes?

Penny has no reason to get involved — this murder didn’t happen on her doorstep, after all — but she knows so many of the players and has a vested interest in discovering the truth for her friends’ sakes. Soon, she finds herself tracking down the suspects and piecing together the clues, calling upon her prodigious memory and background as a secretary to a forensic genius.

There was definitely something fascinating about all these luxuriously beautiful colours with their hidden malevolence. As Penelope studied the shelf, one particular item caught her eye. A very strong green pigment in another bottle almost glowed. Claudine followed her gaze.

“You have a good eye for danger, Penny! That is Scheele’s Green.”

“In the early nineteenth century, women wore dresses made of fabric dyed a beautiful green using this compound. Often with fatal results. And the houses of the wealthy were often decorated with sumptuous green-patterned wallpaper that also contained it. No one knew that the high mortality rate among the bourgeoisie and upper classes was attributable to this colour, which was so fashionable at the time.”

Penelope smiled. Sometimes her formidable memory could even take her by surprise.

While the murder is the foreground of Death in Avignon, this isn’t just a murder mystery. Amidst her amateur investigating, Penny lives an envious life full of sophisticated friends, luxurious meals, and artistic outings. Her day-to-day experiences are as colorful and entertaining as the mystery, as she handles a sudden unexpected visit from cantankerous family and teams up with flamboyant childhood friend Frankie.

Plenty of space is devoted to Provence itself: the romantic villages and gorgeous countryside, the converted churches next to sweeping fields of lavender, the quirky people and the delicious food.

Kent — the nom de plume of couple Deborah Lawrenson and Robert Rees — has an artistic eye when it comes to this setting, and the familiarity that comes with being English transplants actually living in the area. Their evocative descriptions make this a getaway read perfect for any armchair traveler who can’t afford a trip to Provence themselves.

The massive, bulky shape of the Palais des Papes reared up into the heavens across the great cobbled square. As Laurent escorted Penelope to a restaurant he knew, she felt a tingle of excitement, the medieval Gothic grandeur adding to the sense of occasion. He pointed upwards at the frieze on the Hôtel des Monnaies where festoons of ripe fruit and vegetables decorated coats of arms. It was once the house of the infamous Borgia family, he explained.

It never failed to amaze Penelope how the customers in France took the bustle of service, the superb food, and picture-perfect setting for granted, hardly seeming to acknowledge the baskets of fresh bread, the aromatic herbs judiciously sprinkled on garlic prawns and sizzling cuts of beef, the divine crispness of the frites, the unctuousness of the specialty cheeses and the tempting elegance of the dessert confections. They simply accepted it all as their due. For her, lunch out in Provence would never stop being a delicious, almost guilty, pleasure.

The mystery itself is solid and well-constructed, with some well-placed detours and red herrings to make us second-guess our conclusions. Penny remains a winning, likable heroine, and her friends and neighbors are just kooky enough to add texture without becoming unrealistic.

If you’re in the mood for a mystery with an air of sophistication and sunny, evocative climes — a story that’s equal parts Christie and Peter Mayle — you can’t go wrong with Death in Avignon.