Book Review: Death of a Gigolo by Laura Levine 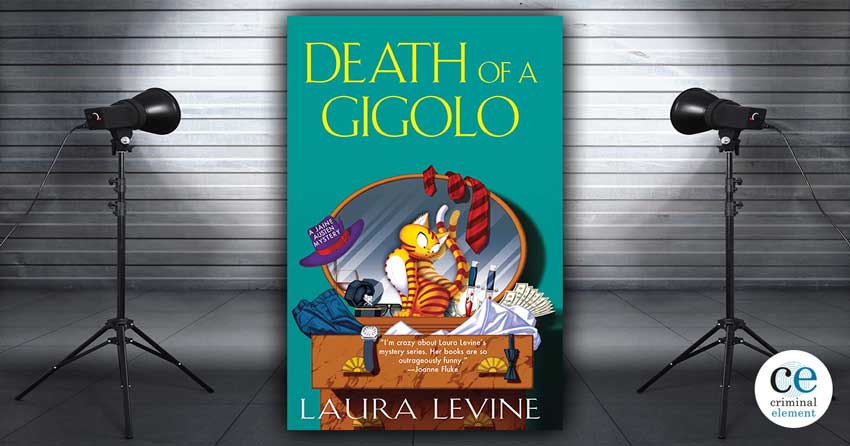 Death of a Gigolo by Laura Levine is the 17th book in the Jaine Austen mystery series, where the freelance writer must solve a murder while ghostwriting a steamy romance novel.

The 17th book of the Jaine Austen mystery series is one of the strongest to date. It’s funny and fresh, with a murder mystery where the clues are woven so subtly into the breezy narrative that you’ll be kicking yourself by the end of it for not figuring out sooner whodunit and why.

Our freelance writer heroine, Jaine, has just picked up a sweet new gig courtesy of her neighbor, Neiman Marcus shoe salesman Lance Venable. While chatting with wealthy client Daisy Kincaid, Lance discovers that she’s looking for a ghostwriter to help bring to life the romance novel she has in mind. Being a good friend, he immediately recommends Jaine.

Jaine could definitely use the money, so she’s pretty excited about this—until she actually starts discussing the idea with the 60-something client. Daisy is an heiress with a love for all things turquoise and wants to showcase that in her book. Well, “her” book. Mostly, she wants Jaine to write a steamy novel along the lines of Fifty Shades of Grey, where the hero and heroine get it on in all 50 rooms of a turquoise-themed mansion.

Sex in fifty turquoise rooms? Suddenly my confidence as a romance writer plummeted. No way was I going to be able to write this bilge.

“So what do you think?” Daisy asked with an eager smile. “Are you on board?”

Absolutely not. I had to steer clear of this train wreck of a novel before it took off.

“As I told Lance,” Daisy reminded me, “the salary will be ten thousand dollars.”

What can I say? I’ve got the backbone of a Slurpee.

Against her better judgment, Jaine takes the gig, but she’s soon cheered up by the working conditions. Daisy would prefer that Jaine work out of her palatial home, grandly named La Belle Vie, sharing an office with her assistant, Kate. Kate is friendly, fun company, but the real perk is the readily available food whipped up by Daisy’s personal chef, Raymond. Kate and Jaine are often invited to share meals with Daisy and her friends, socialite Esme Larkin and retired investment banker Clayton Manning. With housemaid and aspiring actress Solange Delacroix presiding over service, it’s a slice of heaven for Jaine, soul-crushing work on the actual manuscript aside.

But then, Tommy LaSalle enters the picture, and everything at La Belle Vie turns upside down. Good looking but crude, he soon has Daisy hanging on his every word—to the consternation of everyone else in her circle. As his influence over her strengthens, so does the dislike of said everyone else, who are treated pretty much like garbage by the young interloper.

When Tommy is found stabbed in the neck, the question isn’t really why but who. Esme points the finger at Kate, who begs Jaine for help. And since Jaine would much rather solve a mystery than work on writing derivative drivel, she’s more than happy to plunge in.

Alongside this really terrific murder mystery is a hilarious subplot where Jaine’s romantic life is given a huge jolt by the reappearance of her ex-husband, Dickie Elliott, who seems to have changed his life for the better. Unfortunately, Jaine’s opinionated cat, Prozac, does not share her warm feelings, and the battle between Prozac and Dickie is comedy gold. It doesn’t really matter whether the musings in the text are actually Prozac’s own or merely Jaine’s (accurate) readings of her cat’s behavior, they make for hilarity regardless.

Needless to say, Prozac was her usual sunny self as I tried to get her into her carrier.

Unhand me this minute! What do you think you’re doing? Keep this up and I’m going to report you to the ASPCA! The ACLU! The CIA! Nothing will stop me in the pursuit of justice—Hey, do I smell savory salmon innards?

She lunged at the kitty treat I’d tossed in the carrier, and I snapped the latch shut.

And, as always, we’re treated to the emails of Jaine’s parents from Florida, where they each provide their perspectives on their latest comic misadventures, this time involving art classes and a discount coupon on a haircut. Death of a Gigolo is a classic Jaine Austen mystery, with hilarity and whodunit in equal parts and a strong helping of romance on the side. It’s a delightful, brisk read, and I’m only sorry I was done reading it so quickly, as it means that much more time to wait till the next book in the series.