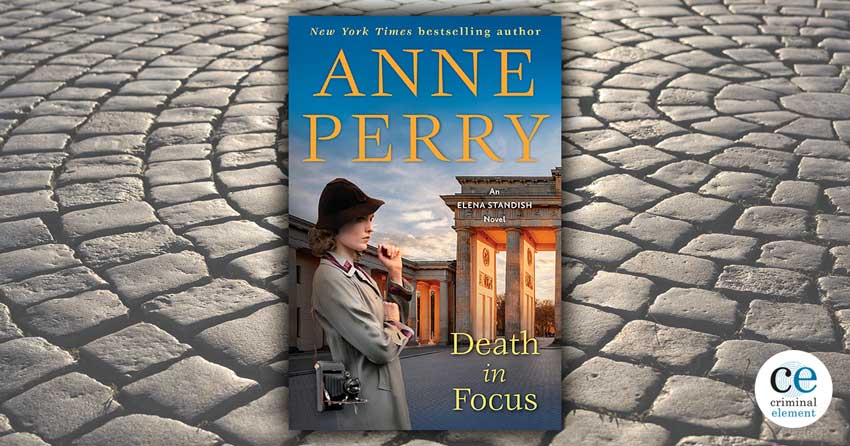 Death in Focus by Anne Perry is the first book in the new Elena Standish mystery series set in pre–World War II Europe, where an intrepid young photographer carries her dead lover’s final, world-shattering message into the heart of Berlin as Hitler ascends to power.

Death in Focus is the inaugural entry in Anne Perry’s new Elena Standish series set in pre-World War II Europe. It is near impossible to comprehend the casualties of World War I. The British Empire sent 8,904,467 men to fight in the Great War; 908,371, or close to 10 percent of the soldiers, never came home. The impact on British society was incalculable.

Elena’s older sister, Margot, was a newlywed when her husband was killed, and the Standish sisters also lost “their beloved brother” Mike. The English—full of patriotism and idealism—called the First World War “the war to end war,” but that was not to be.

Fifteen years after the end of WWI, Elena and Margot are enjoying the beauty of Italy’s Amalfi Coast. Elena’s job is to photograph the delegates at an economists’ conference, and Margot is along for the ride. Elena is captured by the history and beauty of Amalfi but feels unequal to the task of capturing it for posterity.

Elena was staring at a woman further down the steep hill. She wore a scarlet dress and was dancing by herself, within her own imagination, perhaps lost in time in this exquisite town on the edge of the Mediterranean, which had lured the Caesars from the wealth and intrigue of Rome to dally here.

A charming man approaches Elena, asking if the dancer is “a figment of a fevered imagination.” He introduces himself, “Ian Newton. Economic journalist. Sometimes.” She responds, “Elena Standish. Photographer. Sometimes.” Elena says the dancer is Margot Driscoll, her sister, and Ian asks if Margot’s husband is with her.

“Margot is a widow. Her husband, Paul, was killed in the war.”

Ian Newton nodded. Of course … This was a situation encountered every day, even now. He looked over to Margot, destined to dance alone in a world populated by superfluous women.

Ian asks the sisters to join him for dinner, and during an argument over which dress to wear, Margot tells Elena that her blue dress choice screams “stick in the mud.” It seems in her salad days, Elena fell for a rotter, a man who “had betrayed them all, and she had been stupid enough to help him, albeit unwittingly.” It ended her career in “a high position in the Foreign Office,” a job attained, at least in part, “to her father’s position as British ambassador in several of the most important cities in Europe.”

Since then, Elena has played it safe—that is until she decides to flaunt a come-on-hither black dress from Margot’s closet. Anne Perry paints a bleak and emotionally bereft picture of post-war survivors.

Fifteen years after the war, everyone still had their griefs: loss of someone, something, a hope or an innocence, if not more. And fear of the future. It was in the air, in the music, the humor, even the exquisite, now fading light.

The pivotal phrase is “fear of the future.” But it is human nature to embrace happiness when it is offered, and Elena enjoys herself thoroughly while dining and dancing with Ian. The evening ends unexpectedly when they glimpse a dead body through an open hotel room door. From Ian’s reaction, Elena strongly suspects he knows the dead man. If that is the case, she wonders, why is he lying to the police?

The scene shifts to England to an elderly man in his quiet study; Lucas Standish, Elena and Margot’s grandfather.

Lucas was a quiet man who read about life. That was what he was to others, even to his own family.

But he had been head of Military Intelligence—MI6, as it was known—for a good part of the war. In his thoughts, he would say “the last war” because he feared there would be another. He was in his early seventies, and not officially part of the service anymore, but his interest had never slackened, and he knew a great deal of what was happening now.

Lucas and his wife, Josephine, entertain their son, Charles, and daughter-in-law, Katherine, at dinner. Their conversation illustrates the tensions that divide people. Lucas doesn’t want another war, but he’s not naïve. Charles is an admirer of Oswald Mosley, a man who is cut from the same gib as Hitler and Mussolini. Charles believes that the last thing England needs to do is rearm, “let alone building more ships! We simply can’t afford it.”

Lucas’s thoughts conjure up today’s world scene, recalling philosopher George Santayana words, “Those who cannot remember the past are condemned to repeat it.” Lucas says quietly that many people are acting out of fear and hatred and that “we must keep fear in its place, not let it make us act in panic, or with disregard for others.” Although a quarrel is averted, father and son know they have merely papered over their profound differences. Josephine asks Lucas if he meant what he said about fear.

“Yes. Fear begets violence and hatred,” he answered. “It’s the easy answer. Blame someone else. Blame the gypsies, the Jews, the Communists, anyone but ourselves. Get rid of them, and it will all be fine. It’s as old as sin, and about as useful!”

The next day, Peter Howard, a colleague and friend from MI6, asks to meet with Lucas. Howard tells Lucas that he fears Roger Cordell, a man stationed in the British Embassy in Berlin, “might be playing both sides,” and he begs, again, for Lucas to “Come back. Help us to do it right.” Lucas turns him down, but he takes Howard’s warning seriously enough to visit his old friend Winston Churchill, warning him not to take communiques from Cordell at face value.

Back in Amalfi, Elena spontaneously accepts Ian’s invitation to travel with him to Paris after he opens a telegram marked “Urgent” and tells her he must leave immediately. Elena’s journey with Ian becomes inextricably intertwined with Lucas’s past and present—but no more spoilers.

Death in Focus is set in the early 1930s, but the plot is fresh and compelling. Brava Anne Perry! Readers will assuredly count down the months until the next Elena Standish mystery.