December 7, 2020
Set amidst the opulent mansions and cobblestone streets of Old New York, Death, Diamonds, and Deception is Rosemary Simpson's fifth book in her acclaimed Gilded Age Mystery series in which heiress Prudence MacKenzie and ex-Pinkerton Geoffrey Hunter dash down a twisted maze from Fifth Avenue to Five Points in pursuit of stolen diamonds once belonging to Marie Antionette... 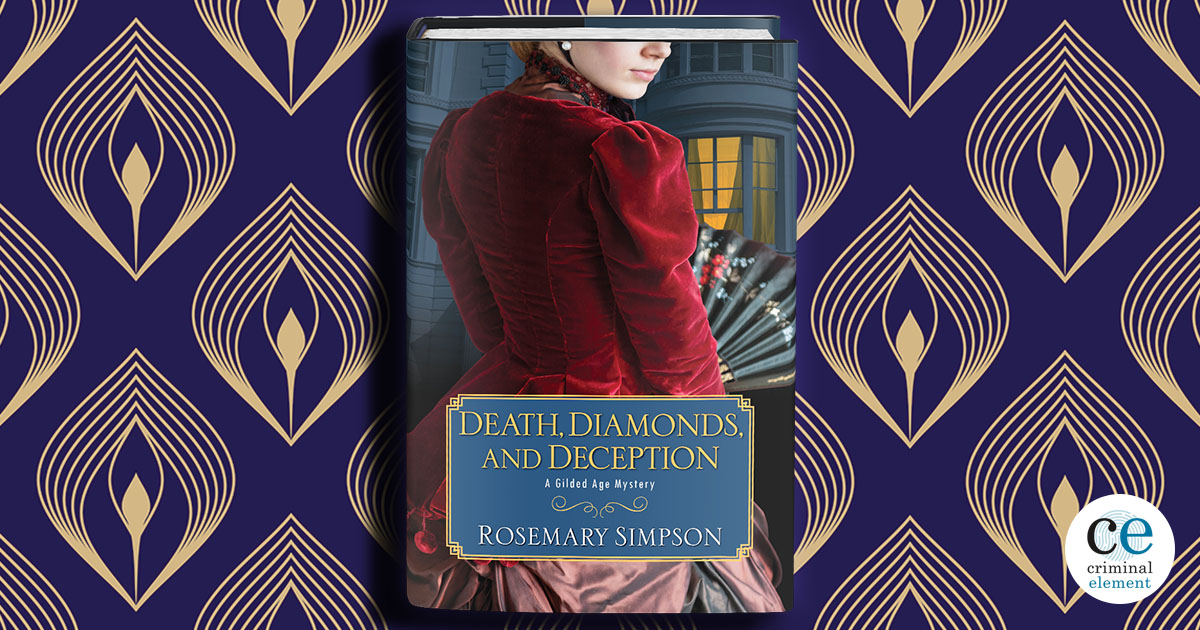 Rosemary Simpson’s 5th Gilded Age mystery is infused with difficult choices, secrets, and sadness although these sober notes are not immediately apparent. Under the chaperonage of her exquisite Aunt Gillian, Prudence MacKenzie prepares for the Assembly Ball at Delmonico’s. Colleen, Prudence’s Irish maid, laces her mistress into the “whale-boned corset” that the sumptuous gown demands. Like the scene in Titanic, when Rose is laced up by her ambitious mother, lacing “made it impossible to take a deep breath.”

But tonight was the first Assembly Ball of the New York season, and the elegant Worth gown had been sized for the fashionable wasp-waist silhouette that could only be achieved by cruelly constricted lacing. “You might as well get started, Colleen.”

When Aunt Gillian overhears Prudence complaining, she has a tart rejoinder: “Breathing is highly overrated. I haven’t breathed naturally except in my bed for more than twenty years,” announced the dowager Viscountess Rotherton, former American socialite and heiress Gillian Vandergrift, from the doorway of her niece’s bedroom.” Lady Rotherton’s paramount goal, why she “sailed from London and endured seven days of rough Atlantic seas,” is to shepherd Prudence through the social season and find her a “suitable husband.” Gillian has her work cut out for her. Prudence is a partner in a New York detective agency and envisions a life where she is more than a wife: “her father’s ambitious tutoring had taught her to yearn for and seek to attain.” The late Judge MacKenzie’s precepts are never far from his daughter’s mind.

Not much escapes Lady Rotherton. She watches her niece twirl around the ballroom in the arms of her attractive partner, ex-Pinkerton Geoffrey Hunter (not suitable marriage material for her niece), until she is distracted by the magnificent diamond necklace that adorns Lena De Vries’s neck. Lena is banker William De Vries’s second wife.

The diamonds around Lena De Vrie’s neck caught Lady Rotherton’s eye again. There was something about them. What was it William had confided on one of those trips to London? Loose stones once owned by Marie Antoinette and destined to grace the guillotined French queen’s lovely décolleté had recently fallen under the auction hammer and been carted off to the New World. Where William had commissioned Tiffany to create a necklace for his wife that would be the envy of every woman who saw it.

Gillian notices that Lena seems a little under the weather and wafts smelling salts under her nose, which allows her to get nose-to-nose with the necklace. The aromatic mist from the vial causes some stones to fog up. William De Vries is aghast. He hires Prudence and Geoffrey’s firm to investigate, exhorting them to keep it completely confidential.

“And Lady Rotherton could tell which stones were true and which were not by how quickly they cleared.”

“Very good, Mr. Hunter. But then I understand you were a Pinkerton at one time. I had no idea until Lady Rotherton explained it to me. She was the one who insisted I bring the necklace back to Tiffany.”

Fake diamonds don’t make themselves. Prudence and Geoffrey tap into their rough and tumble sources and determine that James Carpenter had the talents to create a reasonable facsimile of Marie Antoinette’s sparklers. Alas, someone beats them to the fence’s shop; the police. It’s a gruesome scene but Prudence insists on staying.

Her throat tightened and her stomach threatened to surge up against her teeth when she saw what had been done to James Carpenter.  White feathers lay all over and beside his body, a damaged display pillow tossed to the floor where it floated in a puddle of red. He hadn’t died right away. That was obvious from the anguished expression on his face and his hands clutching the gaping wound from which coils of intestine spilled out.

Who commissioned Carpenter? Experience suggests that persons living in proximity to a crime are the prime suspects. The De Vries household is rather sad. Lena’s son from her first marriage, Morgan, lives with them as does Williams’ nephew, Everett Rinehart. Lena and William have not been blessed with children. Both young men work at the De Vries bank although Morgan’s alcoholism has made him an unreliable employee.

Lady Rotherton is diabolical in her willingness to subvert societal customs in order to ferret out information. Watch her in action at a gathering to mourn Lena’s son.

“Now,” she said firmly, taking hold of Prudence’s arm. “Let’s go see how much information we can squeeze out of the very naughty and misbehaving Lena De Vries.”

“She’s in mourning, Aunt Gillian. She’s standing next to the body of her son,” Prudence protested.

“No better moment,” Lady Rotherton asserted. “Or would you rather give the lady time to cover her tracks?”

Geoffrey wondered if the firm should put Prudence’s aunt on retainer also.

Drugs, alcohol, laudanum, seemingly everyone indulges although some are more able to deal with it than others. Aunt Gillian does threaten at times to overwhelm the story: she’s a perceptive and ruthless force of nature. For all intents and purposes, she is the third member of the detecting team. Her instincts are superb. Fueled by her inner knowledge of the upper classes, on both sides of the Atlantic, she detects dissembling effortlessly. No wonder Geoffrey and Prudence’s loyal team adore the highfalutin lady.

Rosemary Simpson’s Gilded Age Mysteries delve into the realities of the time, like her fourth book, Death Brings a Shadow, set on an island in Georgia. A dear friend of Prudence is murdered, just days before her elaborate wedding. Prudence and Geoffrey Hunter are unflinching in their quest for the truth.

Death Brings a Shadow is as far from a cozy mystery as you can get. It may be set in the Gilded Age and star an independent, outspoken heroine who defies the conventions of her time, but it’s a story full of terrible sadness and nauseating injustice. Simpson, brutally true to history, spares none of the violent, disgusting, and reprehensible details of the post-Reconstruction South.

Diamonds, Death, and Deception can also, “at times, be almost too painful to watch unfold,” because Simpson doesn’t shy away from the difficult choices people make in order to survive. The theme of personal choice threads through Prudence’s actions, as she contemplates her future. What does she want more—love or independence? Given the age, 1889, can she attain satisfaction through Freud’s definition of happiness: “Love and work…work and love, that’s all there is.” Stay tuned!

Want More? Read our review of Death Brings a Shadow by Rosemary Simpson