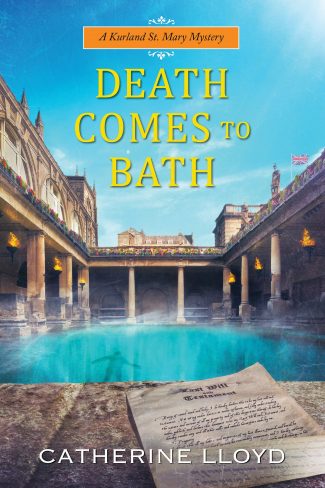 Major Sir Robert Kurland was wounded during the Battle of Waterloo. In January 1822, his steady recuperation hits a major setback. While walking his dogs, he collapses, burning up with fever. His doctor says if he doesn’t let him operate on his injured leg, he’ll probably lose it. Bring on the anesthetic of the time—the best brandy in the house. The operation uncovers a “piece of blue fabric from Sir Robert’s hussars’ uniform” embedded in his leg, an unintended Regency consequence of primitive battlefield medical conditions. His wife, Lady Lucy Kurland, is naturally concerned. Heeding the advice of Robert’s physician, she decides the household will decamp to Bath for the rest of the winter. Robert is not best pleased, but Lucy is adamant.

“You’ve been skulking in that bed for weeks,” Lucy said, pausing in her efforts to straighten the sheets. “Dr. Fletcher believes the hot springs at Bath will be beneficial to you, and I am in complete agreement with him. I’ve rented a house close to the baths and Pump Room where you can drink the waters and take additional treatments as recommended by Dr. Fletcher.”

Robert bows in the face of his wife’s fait accompli. Drinking the waters at the Pump Room in Bath was all the craze: “seventeenth- and eighteenth-century women and men gulped down gallons of spa water in the hopes of curing disease,” even though the water was smelly, “very hot and tastes like the water that boyles [boils] eggs.”

While Robert and Lucy move into their rented house, their next-door neighbor pays them a surprise visit. Sir William Benson doesn’t mince his words: “I’m only here because my wife and my damned physician insisted upon it.” What’s more, Sir William thinks his family only cares about his health because of his money. His knighthood was a reward from the Crown, in recognition “for his service to industry,” but he retains his rough edges and resents that his family lives like idle aristocrats on his purse.

Robert and William spend time together at the baths where they muse about the state of the world: “Sir William had no compunction in sharing his opinions in the most forthright manner, which, much to Robert’s amusement, had soon scared off other listeners.” Their acquaintance deepens when Sir William invites them to dinner, with his exceedingly lovely younger wife, and his extended family. It’s an uncomfortable scene, to say the least. Sir William berates his stepsons, his sons: no one is spared. When his clergyman son Augustus mutters something about Christian charity, the old gentleman explodes.

“I’ve never seen a bunch of more bacon-brained useless ne’er-do-wells in my life.”

“Steady on, Father,” Edward murmured. “I work for you.”

“And you ignore my advice at every turn!” Sir William snapped. “With your ridiculous ideas to cut up my peace and ruin my business . . .” He took another slurp of port, which Lucy thought was perhaps unwise. “I grew up without a sixpence to scratch my arse with! None of you would survive a day down the pit. None of you.”

He puts his ungrateful family on notice: “Mark me well I’ll rewrite my will and disinherit the lot of you!” The next morning Robert sees Sir William’s body floating in the baths. It was not a natural death, as Robert and his physician, Dr. Fletcher discover.

Dr. Fletcher grimaced. “Just below his ribs there was a wound that looked as if he had been stabbed upward toward his heart.”

Robert learns after Sir William’s death that the old man carried his will with him everywhere he went, since he was wont to change it on a whim. Mysteriously, the will cannot be found and there is certainly no dearth of suspects. Lucy wonders if they should get mixed up at all but Robert feels differently.

“Because this time Sir William deserves justice.” Robert held her gaze through the candlelight. “I am more convinced than ever that he died before his time. I intend to bring his murder or murderers before a judge to pay for their crime.”

Murderers should be afraid when Robert and Lucy set their minds to find justice for a man who “died before his time.” Death Comes to Bath, the sixth Kurland St. Mary mystery, is a compelling blend of history and mystery with a likable and capable couple at the helm.