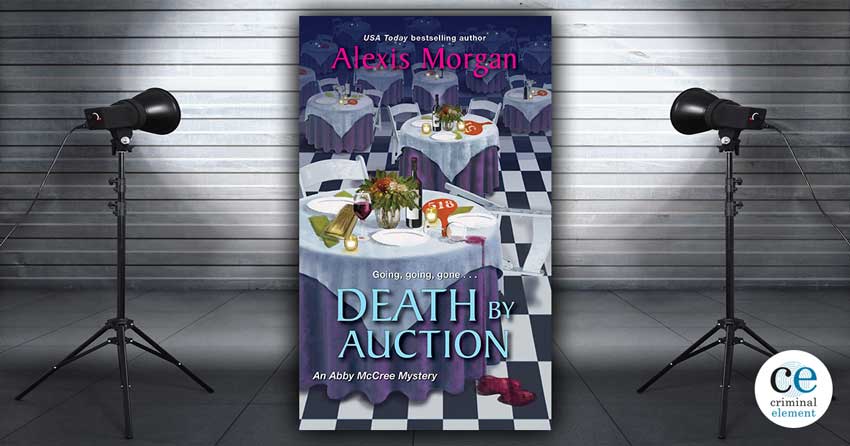 Death by Auction by Alexis Morgan is the third book in the Abby McCree Mystery series, where Abby McCree inherits her aunt’s house in Snowberry Creek, Washington, as well as a handsome tenant and a whole lot of trouble.

Since the events of Death by Committee, Alexis Morgan’s first Abby McCree Mystery, Abby is ensconced in Snowberry Creek, Washington. She still struggles with the legacy she inherited from her beloved Aunt Sybil—a rundown mansion, a tenant who exchanges chores for a reduction in rent, a sizable storehouse of quilts and fabrics—and Sybil’s reputation for civic responsibility. Like Sybil, Abby is constantly asked to volunteer for every committee in town—and she’s expected to say yes.

Her latest venture is organizing an auction to help veterans. Her tenant, Tripp Blackstone (perhaps a little more than a tenant), is former Special Forces, so when he asks her to take it on, she can’t refuse. Turnabout is fair play, however. Abby asks Tripp to take part in the bachelor auction. She’s conflicted over whether she can bid on him herself, given her leadership role, so his biggest danger is Jean, a sweet old biddy who bestows inedible tuna casseroles on him.

The auction gets off to a worrisome start when Bryce Cadigan, Abby’s celebrity auctioneer, doesn’t show up on time.

Abby isn’t feeling too confident about her choice, but Bryce finally appears, and they have a cordial conversation. Before he starts off the evening’s festivities, Bryce briefly pauses, draws a breath, and closes his eyes.

When he opened them, it was as if he’d slipped on a totally different persona, and the overly polished slick charm was back in full force.

Bryce was undeniably handsome, but for some reason he left her completely cold. Crossing her fingers the audience didn’t react that way, she walked out to center stage and picked up the microphone.

“If I can have everyone’s attention, I’d like to introduce Snowberry Creek’s very own Bryce Cadigan!”

Tripp is the last gentleman to be auctioned. He works the crowd like a pro, smiling and strutting while “the ladies went crazy.” The bidding goes up and up, into four-digit territory, when a ringer enters the fray, saying, “I bid five thousand dollars for Tripp Blackston.” A “stunning blonde” strongly embraces Tripp, and Abby asks who she is.

His reply was only two simple words, but they turned their whole relationship inside out and upside down.

There was a lot of guilt in his dark eyes as he answered, “My wife.”

Valerie Brunn is his ex-wife, as Tripp tries to explain, but Abby’s not having it. The evening disintegrates further as she tries and fails to give an elusive Bryce Cardigan his final check. Then, she sees him and Valerie getting into a loud argument before Bryce goes out the door, heading for his car. When Abby finally gets out to the parking lot, she’s surprised to see “the driver’s door was still open even though the beeping noise had finally stopped.” How very odd.

But as she rounded the end of the car, she realized it wasn’t only the battery that was dead.

The owner was, too….

Again? Abby hasn’t lived in Snowberry Creek long, but this is her third dead body—and she knows the drill. She asks Gage Logan, the town police chief, to leave the hall and join her at the scene. Who, if anyone, “went outside with Bryce,” Gage asks.

Crossing her fingers that Tripp would forgive her for dragging the barnacle into a murder investigation, she sighed and said, “Valerie Brunn, Tripp’s ex-wife.”

Gage’s muttered response was brief but obscene. She knew just how he felt.

The theme of Death by Auction is the power and pervasiveness of the past and how unresolved issues and conflicts weave their tendrils into day-to-day life. The auction emcee was a smarmy guy—examples abound of his nasty nature as far back as high school—but did he deserve to die? Tripp’s ex is the prime suspect (although she loudly proclaims her innocence), and Abby doesn’t want the “barnacle” (as she dubs her) to muscle in on Tripp. To put some space between Val and Tripp, Abby graciously agrees to have Val stay with her.

What are Abby’s coping strategies? Baking, for sure (and doesn’t that feel familiar to many these days?); her kitchen table is the scene of many informal debriefing sessions. Her friends and acquaintances usually leave with cookies or squares.

“Give me a second to grab you a container of them. I always have a supply in the freezer. I like to bake when things are bothering me, and that seems to happen all too often lately.”

She also quilts, ruminates, organizes, and her favorite, investigates! The sooner the real killer is unmasked, the sooner Val will leave town. Abby uses her dog, Zeke, as an excuse to wander about, stop, and ask questions. She’s at somewhat of a crossroads in her life. Is she morphing into her great-aunt? How serious is her budding relationship with Tripp? Is the police chief interested in her? That’s a hallmark of many books in the cozy mystery vein: humor + two guys interested in the heroine (one almost always law enforcement) + a town with secrets that are gradually revealed.

Death by Auction is an enjoyable foray into small-town mysteries, past and present. Abby McCree is a standup heroine with a flair for seeing beyond the obvious.