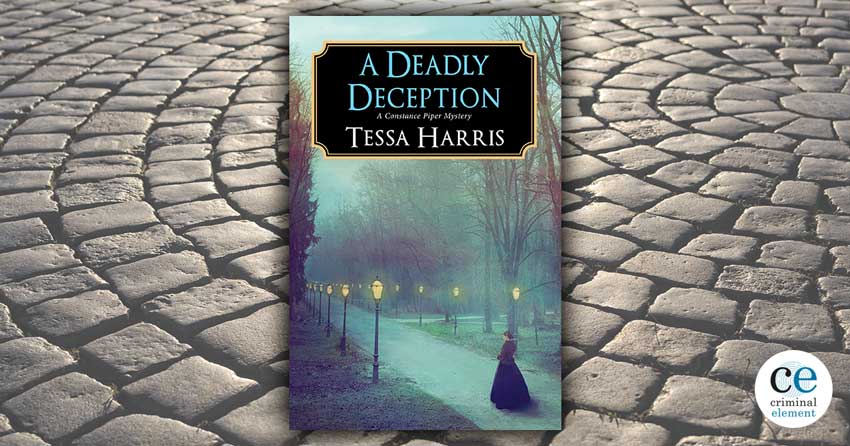 A Deadly Deception by Tessa Harris is the third book in the Constance Piper Mystery series, where the streets of Victorian London are clothed in shadows and secrets and Jack the Ripper might have returned.

Victorian mysteries and Jack the Ripper go together like True till death, which is Cockney rhyming slang for breath. The hovering shadow of Jack the Ripper is the breath of life to Victorian mysteries since one of the unsolved mysteries of our age is his identity. The fear he instilled in the population of London crossed class lines because the mutilated bodies were vivisected with a surgeon’s well-trained skills.

It’s been eight months since the brutal murder of Mary Jane Kelly, who died at the hands of Saucy Jack. Whitechapel, in the heart of London’s East End, is beginning to “breathe easy.” Residents aren’t terrified to leave their windows open a crack or stroll about in the gloaming. “But when old Alice Mackenzie is found dead, throat slashed from ear to ear, the whispers begin once more: Jack the Ripper is back.” It’s a natural conclusion, but three people think not: flower seller and psychically-gifted Constance Piper; revenant Miss Emily Tindall, Connie’s former teacher from the Great Beyond; and Acting Inspector Thaddeus Hawkins.

The three work, each in their own lane, to catch the killer. Tessa Harris tells the story of A Deadly Deception from two points of view: Constance in the first person; the observations of the late Miss Emily Tindall, “a person who has returned, especially supposedly from the dead,” in the third. Emily weighs in from various spots like a mortuary, a police station, and an upper-class “rather splendid neo-Gothic gentlemen’s club on the Embankment” as she “live-streams” the action. That’s how we know what Thaddeus is up to. Tessa Harris juggles the disparate strands deftly and seamlessly.

Constance Piper knows everyone in Whitechapel. To help her friend Thaddeus and to find out for herself who killed Alice, Constance conducts informal interviews.

That’s why I’m wanting to know what Alice did in her last hours before she was killed. Like I said, the police have been ferreting and taking witness statements, but they can’t read people as I can. Faces are like books to me in this neighborhood. Miss Tindall used to say it was my “intuition.” I can sense when a person’s lying, or keeping something back, just like I knew Thaddeus was holding his cards close to his chest. I need an excuse to visit him, so I’ll do some poking myself on Alice’s old stomping ground and tell him what I’ve gleaned. Seeing him yesterday with that haggard look on his face makes me think he can do with all the help he can get.

Acting Inspector Thaddeus Hawkins has every reason to look haggard. He receives a handwritten letter bearing “the crest of the Metropolitan Police.”

It is with great concern that I learned of the latest killing in Whitechapel. I would therefore be most grateful if you could meet with me in my office at your earliest convenience to discuss the case.

I am sure you will understand the confidential nature of my request.

Commissioner of Police of the Metropolis

Well, this is very much out of the ordinary since Thaddeus reports to “others far more senior than him.” He concludes that “whatever the commissioner has up his sleeve, he clearly doesn’t want to involve any senior officers.” The why becomes clear when the commissioner tells him the “latest Whitechapel atrocity is not the work of a lone psychopath, the so-called Jack the Ripper, but of a Fenian.”

Fenians were “Irish supporters of an uprising against British rule.” They conducted bombings, political assassinations, and plotted against Queen Victoria to further their goal of an independent Irish Republic. Hawkins wonders how the murders of “desperate, penniless nobodies” like Mary Jane Kelly and Alice Mackenzie help the Fenian cause. Cui bono comes to mind, “who stands, or stood, to gain (from a crime, and so might have been responsible for it).” Monro explains.

“By perpetuating the terror seemingly wrought by this Jack, the terrorists are making the police look helpless,” he explains. “In the meantime they are regrouping in order to commit more mainland atrocities.”

The notion jolts Hawkins back in the moment and he takes up the thread. “You crushed the network before, but now they are planning to make a comeback. The Whitechapel murders are decoys.”

Tessa Harris leavens A Deadly Deception with humor, Cockney slang, and the patois of the East End. For example, Mrs. Ryder gives Constance “a good shufti” before she consents to be interviewed about Alice, shufti being “a quick look or reconnoiter.” When Constance’s sister Flo whispers to her about a good-looking copper, Harris slips in some slang, “As if he can feel we’re giving him a good old butcher’s hook, I mean look, he turns and throws us a look with a pair of brown eyes bright as garnets.”

Asymmetrical warfare, however, conducted on a guerrilla level in the East End and stretching to the corridors of power in Whitehall, is at the core of the mystery. Jack the Ripper is a ruse in a fierce struggle between the burgeoning secretive Special Branch and the offices of the London Commissioner of Police. Commissioner Munro has nothing but contempt for the shadowy methods of his former colleague “Bernard Royston and his ilk.”

His spies called themselves policemen, but they were of no more assistance than novelists in solving crime. Such secrecy may be favored in Russia, but we are not a police state and, as long as I have breath in my body, will never be.

Constance, Thaddeus, and Emily have their marching orders. It’s not necessary to have read the first two Constance Piper Mysteries, The Sixth Victim and The Angel Makers, to enjoy A Deadly Deception, but who can resist the temptation to explore the world that Tessa Harris has created?