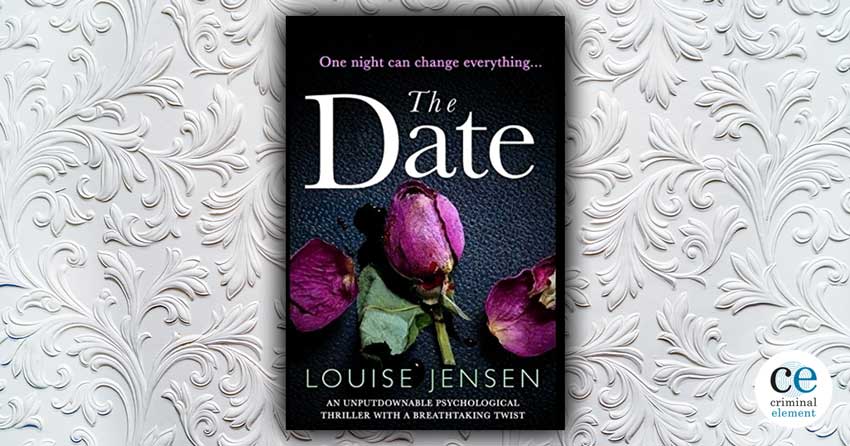 The Date by Louise Jensen is a gripping suspense novel where a woman’s date goes horribly wrong when she wakes up beaten and unable to remember anything about the night—or recognize her closest friends.

I really enjoyed Louise Jensen’s 2017 novel The Surrogate, so I had high expectations for The Date. It starts with a simple but plenty scary premise. Twenty-eight-year-old Ali is separated from her husband, Matt. Her friends—including her neighbor Jules and roommate, Chrissy—are keen to talk her into meeting someone via a dating app. She settles on Ewan, who enjoys “home-cooked roasts, dogs, and fishing.” Her friends think he sounds boring, but Ali thinks he sounds safe, which is just perfect.

She misses Matt, and all she really wants to do is go home, but she figures a night out could be a bit of harmless fun. Not so much.

The morning after her date, Ali is in bad shape.

I know that as soon as I wake from a thick, muddy sleep. I know that even before I am aware of the throbbing at my temples. It’s not the stab of disappointment I get every morning when I realize I’m not in bed with Matt, that I’m no longer living, or welcome, in my own home. It’s something else. My head is pounding, thoughts cloudy, and the whole room feels as though it’s spinning.

Ali has a lump on the side of her head, bruises around her wrists, and absolutely no memory of what happened the night before. But the worst is yet to come. When she looks at herself in the mirror, she’s shocked by what she sees.

The sight of my reflection triggers an overwhelming onslaught of fear and confusion, my breath sticking in my throat, until I force it out in one long scream. I tell myself I must be asleep. This has to be a nightmare. It has to be.

This can’t be real.

Swallowing the acid that has risen once more, I close my eyes and take three deep, calming breaths before I dare look in the mirror again.

The face reflected back at me is not mine.

Not recognizing yourself is scary enough, but when her brother, Ben, shows up at the house, she doesn’t recognize him either, only his distinctive silver-framed glasses. Ben takes her to the hospital where she’s diagnosed with prosopagnosia, a condition that keeps her from recognizing even the people she knows the best. Even worse, she’s told it will likely be permanent.

The implications for her life are terrifying, but things are about to get much worse for poor Ali. For one, Chrissy is missing, and she can’t contact her. Chrissy has unfriended Ali on Facebook, and her voicemail is full, so Ali can’t leave her a message. Ali’s friend and Chrissy’s coworker, Jules, insists she’s just taking a short holiday, but Ali can’t believe she would have left without telling her where she was going or for how long.

Then, she spots a strange man outside of her house and keeps getting weird warning notes and packages. One even has a pair of bloody gloves in them. By now, you’re probably wondering why Ali hasn’t gone to the police yet. Most of us would have, right? There is a reason, and they do intervene when they discover Chrissy is missing. This is when things really blow up for Ali.

Ali makes an especially interesting unreliable narrator. Her condition keeps her from being completely reliable, and she has to rely on those she trusts to navigate many of her everyday activities in the beginning. This can be problematic, of course, when Ali starts to realize she may not be able to trust some of the people closest to her.

Jensen does a really good job conveying the emotional distress someone might experience after being diagnosed with something like prosopagnosia, and Ali develops coping mechanisms that keep her sanity intact even as she deals with an increasingly scary and impossible situation. Jensen really puts Ali through the wringer as she tries to find out what happened that horrible night and what has been happening to her since. Lots of clever red herrings are woven in with Ali’s fast-paced narrative, which includes many flashbacks to her traumatic childhood. Trust me, once you start this, you won’t want to put it down.