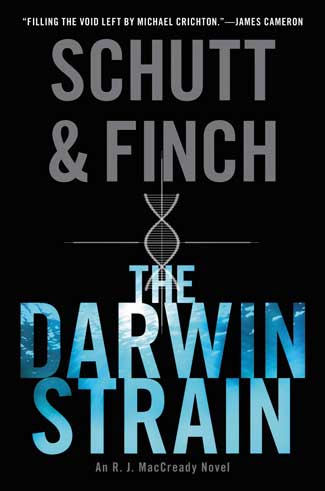 For the third novel in their series blending the science of evolution and history, Bill Schutt and J.R. Finch bring the cold war to the Greek island of Santorini. The volcano isn’t the only thing heating up, as tensions between the Americans and the Russians flare over an underwater discovery that could threaten humankind’s position as the dominant species on the planet.

In the waters near the volcanic island, an algae-like substance stained the water blood red. Fishermen find it has the power to heal, yet these red vents are guarded by creatures that kill so covertly that witnesses don’t even know what they saw.

It’s 1948, so there are no cell phones to capture the carnage, but word still travels fast. American scientist R. J. MacCready and Brazilian animal behavior expert Yanni Thorne are sent by the Pentagon to investigate. A pair of Russian agents are dispatched to Santorini too, but science is the least of their concerns.

The Darwin Strain is the third novel in Bill Schutt and J.R. Finch’s series, which started with The Himalayan Codex and Hell’s Gate. Some of the characters from the previous books, such as researcher Nora Nesbitt, obtained special healing powers from their contact with the red algae in other locations. For millions of years, this mysterious microbe has altered the course of evolution in dramatic ways.

This series takes real historical figures, such as explorer Jacques Cousteau and President Harry Truman, and little-known historical events—a newspaper boy discovering a nickel he was paid with contained coded messages from a Russian spy—and skillfully weaves them into a fictional story. The authors don’t explain what’s real, what’s slightly altered, and what’s fictional until the lengthy Author’s Notes following the story. Some of the action in the story seems unbelievable but actually happened—in some form, at least.

The authors also incorporate mythology and historical seafarers’ accounts of attacks by giant squid, or Kraken. This makes it hard to mock this as a tall tale about killer squids from the deep. It becomes clear the defenders of the red algae are a highly intelligent, and often dangerous, species of cephalopods. They change color to appear virtually invisible and also to communicate. They make complex clicking noises, which Yanni attempts to replicate to have a conversation with them.

Yanni and Mac believe the cephalopods might have near-human levels of intelligence, but Russian military officer Dimitri Chernov doesn’t care either way. He’s determined to exterminate the tentacle-slapping creatures despite orders to take samples for study from his boss, real-life biologist Trofim Lysenko. The Stalinist scientist exiled researchers who believed Darwinism over his flawed theories, and he’s just as ruthless here as his reputation suggests.

Meanwhile, officials from the Greek Church say the creatures are a sign of dark times from religious texts.

“For all we know,” Mac added, rubbing early morning dew from his neck and his arms, “Dmitri could be right. We may end up having to destroy them.”

“The Kraken may be alien to our way of thinking,” began Cousteau’s objection. “Something that can taste your fear or pain from several yards away? Perhaps even see you and the world with its whole body? But I think your Bishop Marinatos and even the Greek police sergeant would now be asking, ‘Who should play God? Who should say those minds are not worth trying to understand?’”

The problem is it’s hard to take time to understand someone in the heat of battle.

In addition to commanding nuclear weapons, the Cold War pivoted on biological warfare supremacy. Whichever side controls the red algae and the creatures it spawned could gain an upper hand, or the intelligent cephalopods could slink ashore and send all the humans packing.

In one epic battle, it’s America vs. Russia vs. Kraken. From dogfights in the air to battleships and submarines tussling with creatures to close encounters in scuba gear, there’s enough action in this book to fill a whole series.

The only part that felt out of place was the flashback millions of years ago to the origins of the red microbes and how they impacted species over time. I would rather live with Mac and his team’s explanation for how it occurred.

Still, The Darwin Strain makes readers rethink history and the world they know and imagine the possibilities of what can be unlocked through evolution. At the very least, it’s hard to look at an octopus—whether on the other side of the glass or on a dinner plate—the same again.