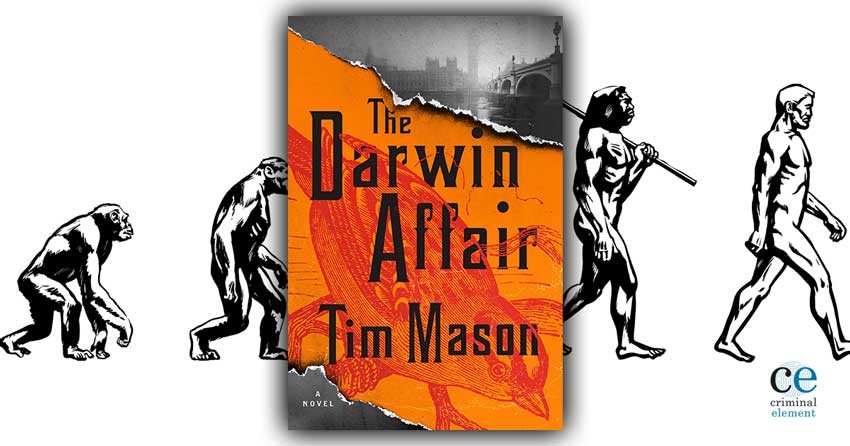 The Darwin Affair by Tim Mason is an edge-of-your-seat Victorian-era thriller where the controversial publication of Darwin’s On the Origin of Species sets off a string of unspeakable crimes.

“We know a thing or two because we’ve seen a thing or two.” The iconic line from Farmers Insurance resonated when I read The Darwin Affair. Without Inspector Charles Field’s mind and muscle memory for nefarious doings—plus a magician’s ability to recreate a crime scene—the death toll of The Darwin Affair would be higher. Close readers of Charles Dicken’s Bleak House will recall that the fictional Inspector Bucket was thought to have a real-life counterpart: “Though Dickens himself denied it, there is much to suggest that Bucket was based on a real person with whom he had struck up a friendship, Inspector Charles Frederick Field [1805-74] of the Metropolitan Police…”

The events of The Darwin Affair begin in “London circa 1860.” An attempt to kill Queen Victoria fails, and by happenstance, Inspector Field witnesses the attempt from a roadside vantage point. He runs away from the hubbub into the crowd. For a law officer of his stature to run away from a crime scene is more than passing strange. Detective Field is asked to present himself at Buckingham Palace later that day where he endures an uncomfortable interrogation by the Queen’s officials. Suddenly, Prince Albert enters the room.

“Detective Field, as I saw this morning’s events, you arrived late and you left early. Turned tail and ran, as a matter of fact.”

Take me out and shoot me, please. Draw me, quarter me—anything but this.

“I was most distressed by what I observed of your behavior. Now, however, I see that you are quite literally covered in what I can only imagine to be blood. So there must be more to the story, is that so? You had reasons for acting as you did?”

“I did, sir. A common criminal, known to me, was planted in the crowd on purpose so I’d find him, sir. Or so I now believe. Thereby I was took out of the way, sir.”

“If this were true, it would suggest conspiracy rather than lunacy,” said Albert, glancing at Commissioner Mayne. “What leads you to believe this, Field?”

“Because of the bloke, um, individual, being found by myself moments later with his head halfway sawed off, sir.”

The “murder of a small-time underworld figure in London” is merely the opening salvo. It is “followed by the kidnapping of a butcher’s boy, the death of a divinity student from Oxford,” and a rising body count. Some of the deaths follow on the heels of situations where Field and his team get too close to the evidence. Field finds the term conspiracy makes sense as he ties together the disparate crimes.

The young Oxford divinity student, who grew up on friendly terms with Charles Darwin’s family, is killed when he attempts to warn the famous naturalist that he has been targeted for harm. Josiah Kilvert, one of Field’s men, is stabbed at the University Museum and dies from his wound. Field is convinced that Kilvert alerted the murderer in some way, hence his execution.

Field puzzles mightily over why anyone would want to harm Charles Darwin. He bounces a notion off Police Constable Sam Llewellyn, wondering who has the most reason to hate Darwin and his theories. Field’s answer: the bishops, the lords, and captains of industry (some of whom are also members of the aristocracy).

“Bad for business, Mr. Darwin’s notions are. But for blokes like you and me? Well, even a policeman can dream, can’t he? It’s not flattering, perhaps, having an orangutan as your forefather, but there’s a kind of hope in it, don’t you see? Last I checked, there weren’t no quality monkeys, nor were there lower-class ones.”

“Crash, boom, Mr. Darwin brings it all down. Rule Britannia and the lot. Brings it down harder and more thorough than Mr. Marx ever dreamt in his darkest revolutionary dream.”

“So why kill the Queen? Why not kill Mr. Darwin?”

After all, “the book’s out, ain’t it?” Fleeing horses, barn doors, and all—the theories Darwin posits in On the Origin of Species cannot be eradicated. But could Darwin and his theory of evolution be taken down a peg? Who are Darwin’s champions, and how could conspirators put a spoke in their wheels? Field comprehends in a flash; had the police “just assumed it was the Queen who Philip Rendell was aiming for?” He blurts out to Sam that Rendell “even told me” the Queen wasn’t the target.

“I’m guessing the Queen don’t know Darwin from Adam’s off-ox. But Albert? Lover of natural philosophy and all things scientific? He’s Mr. Victoria, ain’t he. And even if his good wife don’t care about Darwin’s monkeys, Albert does. All the Prince has got to do is put a word in her ear. Round Christmastime.”

“Come the New Year, that’s it exactly, lad. Knighted by Her Imperial Majesty, Darwin and his theory given the blessing of the Crown. There’d be no putting that genie back in the bottle, not ever.”

Field establishes the “why” of the inexplicably related deaths, disappearances, and kidnappings. When he realizes that Queen Victoria is quite possibly not the intended victim, the race is on!

Many of the deaths have a grisly attribute in common: the ears of the dead are ripped off. Someone is taking a fiendish delight in killing and the attendant mayhem. The madman is dubbed the Chorister—readers may be reminded of Silas, the mad monk in the movie The Da Vinci Code. Walk-ons from famous people like Karl Marx and Charles Dickens add to the verisimilitude of The Darwin Affair. Kudos to Tim Mason for wrapping a fascinating tale around an indisputable fact: Charles Darwin was not knighted by Queen Victoria.