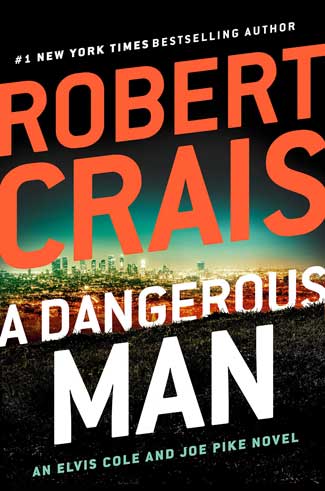 A Dangerous Man is a brilliant new crime novel from the beloved, bestselling, and award-winning master of the genre, Robert Crais, and the 18th book in the Elvis Cole and Joe Pike series.

Robert Crais is back with another installment in the Elvis Cole and Joe Pike series, and he’s done it again with another easy-to-read page-turner starring two of the most creatively drawn characters in mystery fiction. The plot is full of action and puts Joe at the center immediately when a girl he is crushing on gets kidnapped after she gets off work at her bank teller job.

Pike noticed details. The Marines had trained him to maintain situational awareness. Multiple tours in hot spots from Central America to Afghanistan had baked his skills. The driver simply wasn’t looking at Isobel, he seemed to be locked on a target.

Luckily for the bank teller, Joe is ready to save her and make sure her kidnappers are arrested. The drama really begins when the kidnappers get out on bail and wind up murdered. Meanwhile, Joe’s bank teller wannabe-girlfriend disappears in the wind again, sending worrisome texts about her kidnappers to a friend.

Joe wants to find her fast. To pull that off, he needs the help of his old friend, the Disney-loving, Hawaiian-shirt wearing Elvis Cole. They have an 18-book history together, and it shows. Here are Joe’s understated thoughts on how they started working together:

Joe Pike had worn an LAPD uniform when he first met Elvis Cole. Cole, who didn’t yet have his license, still worked as an apprentice for an old-line private investigator named George Feider. When Feider retired a few year later, Pike had already left the police. They pooled their money and bought Feider’s business. Pike was doing contract work by then, gone for weeks or months at a time, fighting other people’s wars. Pike had no interest in being an investigator, but he liked Cole and admired him. They were friends.

Elvis always reminds me a bit of Magnum P.I., Tom Selleck-style, and the dialogue between Elvis and Joe is fit for TV. This is probably not a coincidence since Crais got his start writing for television shows such as Hill Street Blues, Cagney & Lacey, Quincy, Miami Vice, and L.A. Law. All of these long-running hit shows were known for great and well-loved characters, like Joe Pike and Elvis Cole.

As Elvis works his investigative magic in A Dangerous Man, he discovers disturbing family secrets, corporate whistleblowing, money where it shouldn’t be, lots of lies, and maybe even someone in the Witness Protection Program. Which leaves us with lots and lots of questions, starting with: Where does that leave Joe’s new crush? What is he prepared to do about it? And who is the dangerous man from the title?

This novel is storytelling at its finest. Told from multiple points of view for maximum plot impact, A Dangerous Man delivers on the legacy of this great series. Sixteen of Crais’s books have hit bestseller status over the years, and in 2014, he was awarded the Grand Master Award, the highest honor from the Mystery Writers of America.

If you’ve never read an Elvis Cole and Joe Pike novel, treat yourself and start with the very first one, The Monkey’s Raincoat. When it was originally released, it won the Anthony and Macavity Awards and was shortlisted for both the Edgar and Shamus Awards. If you’ve kept up with Crais’s work over the years, jump right in; A Dangerous Man won’t disappoint.

Robert Crais is on tour throughout the US in the next few weeks. His books signings are great fun. Here’s a list of his appearances.