Book Review: Danger on the Atlantic by Erica Ruth Neubauer 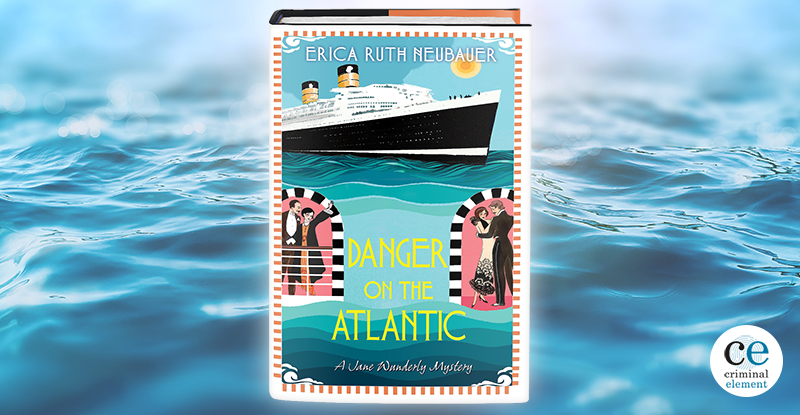 All aboard! It’s 1926. American widow Jane Wunderly and her companion, the charming and mysterious Mr. Redvers, are in Southampton, England. From the first class deck of an imposing transatlantic liner, they wave goodbye to Jane’s Aunt Millie and Millie’s “trim fiancé, Lord Hughes, and their daughter Lillian.” Jane and Redvers spent the last few months at Lord Hughes’s Wedgefield Manor where they solved a troublesome mystery. Now the attractive pair are posing as husband and wife, a disguise chosen so they can uncover the identity of a German spy onboard. A mystery on an ocean-liner is akin to a locked-room plot since once the ship embarks the perpetrators of any unpleasantness will be onboard.

Is it a hardship assignment? Not at first glance. Jane has been given all the props a woman might want.

An entire wardrobe of beautiful gowns and day dresses had been provided for me especially for this trip since I needed to look the part of a first-class passenger. Nothing I owned was quite so fine, and I briefly wondered who had picked up the bill for my trousseau. Shrugging, I pulled out a beaded black shawl and added it to my ensemble, along with an Egyptian scarab brooch. Even if we weren’t going above-deck, I suspected that I would need the extra layer in some areas of the ship, and the brooch was a lovely reminder of where Redvers and I first met (Murder at the Mena House).

Jane hopes to learn more about the man she admires during their ocean crossing but first, who are these possible German spies? Redvers describes them to Jane and their steward, Francis Dobbins (who is also Redvers’s inside man, able to move seamlessly move below deck).

“We suspect there is a German spy on board this ship. Our sources confirmed his presence, but not his identity. We’ve narrowed the field to three possible suspects,” Redvers said.

I was all attention. This was the first time I had been officially included on one of Redvers’ cases, and I wasn’t going to miss this opportunity to prove myself to his employers. Whoever they were. He’d never been terribly specific on that front.

They are Heinz Naumann, another first-class passenger: the efficient Dobbins “arranged for Mrs. Wunderly to have the deck chair next to his.” Redvers approves, telling Jane that it’s a great opportunity for her to chat up Naumann. Dobbins also has a lead on the other two possible spies: “They are both employed here on the ship. The band leader, Keith Brubacher, and the man who runs the photography office, Edwin Banks.” Jane takes careful note although there’s not much she misses. She does gets side-tracked before the ship even pulls out of port. As she waves goodbye to England, Jane spots an unusual couple. A strikingly attractive woman is “swimming in a luxurious coat of silver fox.”

She was clutching the arm of a bearded man who was nearly the same height as she was, and from the way they were clinging to each other and murmuring in one another’s ears, I guessed they were in the throes of a brand-new relationship. The man nattily dressed, although his trousers were just a shade too short and his shoes were overdue for a shine.

It’s never wise to ignore these innocuous descriptions of clothing—they often indicate a discrepancy between a hoped-for effect and reality. The woman is a dodgy, flamboyant American heiress, Vanessa FitzSimmons. She says her husband, Miles Van de Meter, who she just married in Monte Carlo, “has allegedly vanished into thin air along with his luggage.” Only Jane believes Vanessa, stoutly maintaining that she saw the man beside Vanessa—so where is he now?  Redvers thinks the erstwhile spouse might be a product of Vanessa’s champagne-fueled imagination but Jane can’t let go.

When it comes to investigating, Jane doesn’t care to be an observer so she decides to “borrow” Redvers’s lock-pick kit and break into the photo office. She doesn’t suffer from a lack of confidence.

I had never used the picks, but I had watched Redvers handle them on numerous occasions and I hoped I would be able to mimic what he had done.

I quickly learned that it wasn’t nearly as easy as the man made it look. Nearly twenty minutes passed while I tried to get the tumblers in the lock to click into place while also keeping an eye out for passengers who might wonder what on earth I was doing.

How “nerve-wracking” she thinks. Sadly, everything gets more complicated and sadder when Dobbins, their helpful steward and partner-in-investigation, is murdered.

The ship is a hotbed of activity, nefarious and otherwise. There are shipboard romances, a captain who is running a smuggling operation, a missing lady’s maid and a heated-up romance between Jane and the one man capable of making her forget her disastrous and painful first marriage. Lastly, that staple of country house mysteries, the obnoxious table-mate who annoys you with her very loud presence. Everything takes place in sumptuous surroundings, like the café where Jane stops for coffee.

The room was fitted out with summery wicker chairs and a profusion of lush green plants climbing strategically placed trellises. The gracefully arching windows lining the room had decorative bronze metalwork, designed to give the illusion of an actual café—if one could ignore the gray ocean stretching out beyond them.

You’ll be forgiven if the music from Titanic plays in your head while you explore a gorgeous ocean liner and watch Jane and Redvers solve an intriguing mystery. Where next for this peripatetic couple? No spoilers but when they reach dry land, Jane intends to introduce Redvers to her father. Stay tuned! 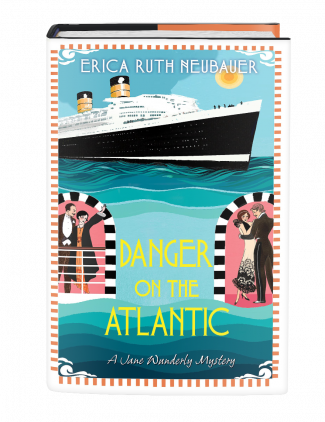 About Danger on the Atlantic by Erica Ruth Neubauer:

Atlantic Ocean, 1926. Voyaging from Southampton to New York, self-reliant Jane is determined to prove herself a worthy investigator on the stately ship–even awkwardly going undercover as the fashionable wife of her magnetic partner, Mr. Redvers. Few details are known about the rumored German spy the duo have been tasked with identifying among fellow passengers, but new troubles unfold once wealthy newlywed Vanessa FitzSimmons announces the sudden disappearance of her husband at sea…

Miles Van de Meter, the man Vanessa rushed to marry in Monte Carlo, has allegedly vanished into thin air along with his luggage. Redvers guesses the shifty heiress may be weaving tall tales for fun between flutes of champagne, yet Jane isn’t convinced–not after the stunning murder of a trusted acquaintance sends them into uncharted waters. Facing two dangerous mysteries and a boat load of suspects, Jane must navigate a claustrophobic quest for answers before the culprits can slip from her grasp on land…or, worse, ensure she and Redvers never reach their destination.