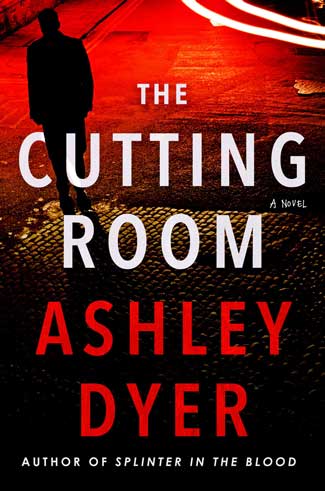 The Cutting Room by Ashley Dyer is the second book in the Carver and Lake police procedural series, where the detectives must stop a serial killer whose victims are the centerpiece of his macabre works of art.

When the host of Britain’s hit true-crime program Fact or Fable goes missing after an episode on the urban legend of “The Ferryman,” a night prowler known for abducting and murdering young men, Detective Ruth Lake and her partner, Detective Greg Carver, realize their case is far from ordinary. They’re lured to a crime scene beyond belief—an art installation in the middle of an alleyway, a spectacle of multicolored lights, and what appear to be slices of human brain as the centerpiece. As more men vanish, cryptic messages come through phone lines, emails, and graffiti on street corners, while the Ferryman’s growing social media presence draws more fans and acolytes out of the woodwork. If that wasn’t enough, a familiar face from Lake’s past resurfaces along with trauma from a lifetime ago. Lake and Carver must reconcile that their boogeyman is, in fact, flesh and blood, and sooner or later, the thing in the shadows may catch them as well.

Told from three different perspectives, including the serial killer’s, The Cutting Room is a crime procedural pitting law enforcement against a faceless murderer determined to hold the spotlight on social media. When Professor Mick Tennent, host of Fact or Fable, vanishes without a trace, it’s up to Ruth Lake and Greg Carver to hunt down his abductor.

In the late ‘90s and early 2000s, Beyond Belief: Fact or Fiction was one of my absolute favorite shows. Jonathan Frakes is such a nostalgic voice that when I saw Fact or Fable on the jacket copy, I was immediately drawn to this book. While the show didn’t play as large a role as I’d hoped—acting largely as the inciting incident—it was still fun to see the homage in print.

Leaning heavily on police procedural, the narrative cuts back and forth between Carver and Lake as they aim to piece together the components of the Ferryman’s artwork, the social media craze, and the Ferryman’s identity as he designs and executes his displays. I do find it somewhat refreshing that this murderer is after young men; so many books are about women being tortured and killed. It’s a nice change of pace. The crime scenes are creative—their installation-art vibe fairly fresh—and I enjoyed the little cold-hearted snippets we get as a contrast to the point-by-point breakdown the police narrative contains.

It feels like we’re right beside him as The Ferryman evaluates the reception of his latest work—and his disapproval of how his creations will be treated by the police:

If I’ve learned one thing in life, it’s the importance of timing. The tick-tick swing of the metronome that separates good moment from bad moment is largely misunderstood by artists. Those who consider themselves on a higher moral plane than the rest of humanity might say that even thinking about timing is monstrous, that taking a business approach to aesthetic creativity is tacky. But would they try to mount an exhibition of fine art outside a football stadium on a wet Saturday afternoon in November? Of course not—it’s all about catching the wave.

I’ll admit, I’ve been through my share of personal wipeouts; I’ve even missed the wave entirely because of bad timing. So, while I am impatient, I can wait for the surf to swell beneath me.

Which is why I am watching the news updates hourly, listening to the tick-tick of the metronome, waiting for the announcement that will signal a change in pace, and launch the next phase of my campaign.

So far, the press releases have been unforthcoming. Apparently the postmortem examination is “complex and delicate.”

It pains me to contemplate what they will do to my art: dismantle, dissect, slice, macerate, analyze the component parts as though they were no more than sliced meat. And all this in a fruitless search to discover hints of my presence. No matter: as Gustav Metzger once said, “Destroy, and you create.” I must think of this as artistic process, constructive deconstruction.

My followers continue to grow which is consolation—fifteen thousand at the last count, and no sign of a slowdown. They reach out to me, flattering, trying to coax me into a response. But timing is of the essence in this, too, and I will not be rushed. I monitor, and I wait.

I will say that I didn’t find The Cutting Room to be quite a standalone novel in the way some sequels lean. It is the second book in the series, but there are so many characters in the precinct and continual allusions to what happened on the previous case that I got a little lost and overwhelmed. Some of the characters appeared only once or twice in the story or were mentioned offhand, so I found it challenging to keep everyone as distinct figures. I’m also not entirely sure whether or not the first book got into Ruth’s past; when a secondary plot point came into play, I felt like I was missing something. It didn’t detract from the story too much, but it is something to note in case, like me, you haven’t read the first book in the series.

That being said, if you’re a fan of in-depth crime procedurals, this is hands down a book for you.