Book Review: The Coyotes of Carthage by Steven Wright 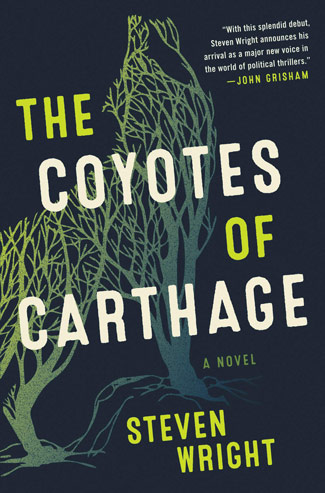 The Coyotes of Carthage

The Coyotes of Carthage by Steven Wright is a blistering and thrilling debut―a biting exploration of American politics, set in a small South Carolina town, about a political operative running a dark money campaign for his corporate clients.

Dre Ross is about to lose his job as a political consultant after going way too hard on an opposing candidate in a race his team was already winning. His boss and mentor, K Street legend Fiona Fitzpatrick, gives him one last chance—persuade the citizens of the rural town of Carthage, South Carolina, to open their pristine public lands for private sale. With $250,000 in dark money from the company that wants to mine said lands for minerals, this should be a cakewalk for the savvy, experienced Dre. Certainly, it’s a low-prestige, low-budget job that he’d ordinarily turn up his nose at, but given his shaky standing at the office, he’s only too happy to take the money and get to work.

With only one assistant, the 20-something Brendan, to help him, Dre must find a local strawman to collect the signatures needed to place the public-land sale initiative on the upcoming electoral ballot. Despite Dre’s misgivings, they hire Tyler and Chalene Lee, a God-fearing couple down on their luck, to be the public face of what they’re cynically positioning as a fight for liberty, asserting the town residents’ right to dispense of their land as they will without “government” interference. Dre and Brendan sandwich the proposal between an unsurprisingly popular initiative to post a copy of the Bill of Rights in every public building and the more contentious issue of the salary of the City Manager, the quietly competent and thus doomed Paula Carrothers.

As the political fighting gets uglier and spills over into the personal lives of everyone involved, Dre is forced to evaluate his own shortcomings as well as his diminishing hopes for the future. His sense of cynicism, at least, is gratified by his own reception in Carthage. At first fearful that he and Brendan would be easily made as suspicious outsiders looking to bamboozle the locals, he finds that by the end of his tenure, the mostly white residents have a far more comforting, to them, opinion of him.

For three months, he worried that folks might learn he’s a well-paid, high-powered campaign consultant, but now he rests easy knowing that people think he’s simply a bum. And that, to him, epitomizes the kind of place Carthage is. A place where folks will easily believe that a black man with a decades-old criminal record is a wandering rogue but will never—never, ever, not in a million years—believe that this same black man is a political puppeteer running a secret grassroots, corporate-financed dark-money campaign.

Steven Wright uses his years of experience with the law to write a searing indictment of American prejudices and money politics, highlighting how even people who know better will look away from injustice in order to fatten their wallets. The pervasive sense of self-delusion would feel surreal if we didn’t see it in action every day on the news and in our own lives. In particular, the abuse Paula takes as a female town official who just wants to do her job is both horrifying and heartbreaking, and it’s all too recognizable for anyone who’s paid any attention to America’s last few election cycles.

The Coyotes of Carthage offers real insider information not only to the American psyche but also to the slick tactics of political consultants looking to con the American people into voting against their own self-interests. Dre and Brendan use every trick available, from high-tech algorithms that target individual voters to little decorative fillips that invoke patriotism to simple psychological trickery to get people to put pen to paper.

There, Andre finds his pen with erasable ink. He scans each ledger’s first page, scribbles inside one dozen fake names. In his experience, a voter is far more likely to sign a petition if the voter believes that the initiative already enjoys popular support. No one likes to sign a petition first, or second, or eleventh for that matter, but every red-blooded American dreams of joining a noble political cause. He’ll erase these fake names later.

A fascinating look at the skulduggery at work in our current political climate as well as the toll it takes on the spirit of both its practitioners and our nation. The Coyotes of Carthage is an insightful depiction that does not, however, offer solutions to the problem. And that’s okay because this is a novel that aims—as with Upton Sinclair’s The Jungle—to expose the ugliness that enables American capitalism to run unfettered in its present state and start a conversation on how to make things better for the majority and not just the billionaires pulling the strings in the background. It’s a timely novel that I hope doesn’t get overlooked in this time of pandemic—especially considering how relevant its issues continue to be with each passing day.