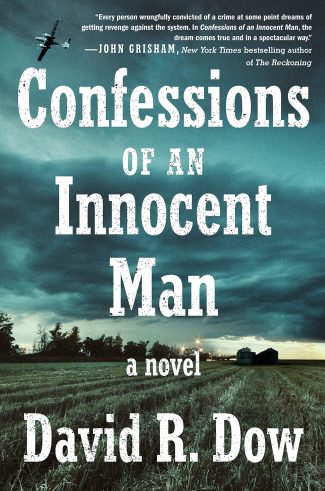 Confessions of an Innocent Man

In David R. Dow’s suspenseful debut novel Confessions of an Innocent Man, restaurant owner Rafael Zhettah is wrongfully convicted of the murder of a celebrity philanthropist, but he fights—for his freedom, and to deliver justice to those who stole everything from him.

David R. Dow, author of Confessions of an Innocent Man, is the founder and director of the Texas Innocence Network and has represented more than one hundred death row inmates. He’s written several books of non-fiction, but Confessions is his first foray into fiction. For his first novel, Dow attempts to capture the turmoil of someone unjustly imprisoned for murder who uses vengeance and retribution as a form of justice, and Dow also reflects on the criminal justice system in the U. S.

Rafael Zhettah, a restaurant owner and all-around good guy is heading toward trouble. To borrow a line from Charade (1963) it seems that Rafael Zhettah and “good luck always was strangers.” At first glance, one might think him lucky. His father, a poor pilot from Mexico, flies his pregnant wife to the U.S. so Rafael can be born a U.S. citizen, but his father is brutally murdered. However, his father has made sure that Rafael can go to college, after which he attends a culinary school and opens a successful restaurant in Houston. Maybe his luck has changed for the better. At thirty-eight, he is a pilot and a bachelor, footloose and unattached, and he likes it that way until he meets Tieresse, who is older by twelve years, a philanthropist, sophisticate, fun loving, and super-rich. Sparks fly.

According to Rafael “Tieresse was my love and my soul mate. I could not have cared less about her money. Roll your eyes if you want to. I don’t care. I adored her. We’d sit next to one another on our sofa for hours, our shoulders touching, and read or watch TV. She was my best friend and the kindest and most generous person I have ever known.”

Tieresse finds that sex causes her physical pain despite operations she has had to fix the issue. So she says that she does not mind if Rafael sleeps around now and then as long as she does not hear about it. And she is true to her word.

Rafael’s luck, never great, gets worse when he is spending the night with one of his waitresses in his apartment above his restaurant while at home his wife is bludgeoned to death leaving Rafael with billions of dollars. Rafael gets arrested, and based on the slimmest of circumstantial evidence, he is sentenced to death. Now he becomes a number with “an orange jumpsuit that smelled like bleach, plastic flip-flops, and a laminated ID.” He was one of “9416 inmates, half black, twenty percent Latino, ten percent Asian.” Rafael comments: “Some people say the first night is the worst, but I disagree. What it is, is different. It is unlike anything you have ever known. But once you get accustomed to the constant din, to the menacing white supremacists and sadistic COs, to incoherent babbling and inexplicable shrieks, once you get used to all that, every night is the worst.”

But for Rafael Zhettah, death row is not the end. At first he counts the days while his appeal makes its way through the courts: Day 123; Day 277; Day 290; and for a change “we measured our lives not by the month, but by what sport was being played. Guys bet commissary items on basketball games, then turned to baseball, and football after that. People wouldn’t say, I got a date in August; they’d say I’m gonna miss the NFL. But still the days go by: Day 1,067; Day 1,699; Day 2,019, and so it goes. The days dwindle down until Rafael is but a few hours from execution. And on day 2,029 after nearly seven years on death row, Rafael is freed by new DNA evidence.

After release, Rafael notes, “I discovered an important truth about myself. I’ve read interviews of exonerated men who spent years in prison before being released, and they always seem so serene and centered. They betray no hint of vengefulness or rage. They go on TV and say they harbor no malice toward anyone, and they mean it. They say, Mistakes are made, and then they shrug. They say, Shit happens. They describe human tragedy with the passive voice. They say, There’s no point in being bitter, and they aren’t being insincere. They set up charitable foundations and go on the speaker circuit to urge reform of the criminal justice system. They write books and give the profits away. After years of being brutalized by a system that did not care about them at all, that denied their very dignity, they remained decent and good.”

However, “I realized: I am not one of them.”

And so, the victim becomes the vigilante. Rafael spends a lot of time and money setting up his revenge, and it is cruel. While I believe the death penalty is wrong (too many innocents are executed, they are largely from minorities), Rafael’s revenge leaves a reader with a moral quandary: is what he does ok? What arguments can we make for or against his revenge? The answer is not black and white, but Rafael’s luck true, to form, does finally run out.