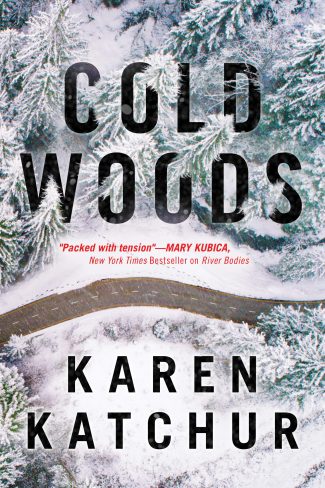 In Cold Woods by Karen Katchur, when long-buried bones of a man turn up in the middle of December, Pennsylvania homicide detective Parker Reed knows he’s in for a cold case.

Award-winning author Karen Katchur marked a new trajectory with the publication of last year’s River Bodies—the first suspense novel in her Northampton County series featuring Pennsylvania homicide detective Parker Reed. Prior to that, she’d written two women’s fiction titles: The Secrets of Lake Road (2015) and The Sisters of Blue Mountain (2017). And while those earlier works hinted at this darker direction, Katchur’s new saga—which continues with August’s Cold Woods—is all-in and draws strongly from her educational background in criminal justice.

The story opens in December 1986 with the burial of a body in the Blue Mountains, not far off the Appalachian Trail, perpetrated by persons unknown. Fast forward thirty years, and we find Det. Parker Reed on scene, where a human skull has been unearthed. It’s a bitterly cold winter, and Parker is convinced that his assignment is (continued) punishment for his romantic involvement with a witness, Becca Kingsley, from his last homicide case (River Bodies). The investigation quickly confirms that the remains are those of Lester Haines, who went missing decades ago—and that blunt force trauma to the head was his cause of death.

Meanwhile, Trisha has just come back to Bangor, PA for the first time since skipping town after graduating high school. In the intervening years, she’s reinvented herself as a socialite by marrying a Vegas high roller who can’t seem to keep his hands contained to cards, chips, and dice. Trisha’s homecoming doesn’t just mark a reunion with her mother, but with the two friends, Carlyn and Dannie, she lost touch with after a shared secret shattered their seemingly unbreakable bond. That secret has something to do with Trisha’s stepfather, Lester, and the questions surrounding his death threaten to expose deep, dark truths that create an aura of suspicion. After all, Lester’s predilections lent themselves to myriad motives for murder.

The narrative alternates perspectives and time periods. This is an effective construct in that it allows the reader to meet Trisha and her girlfriends (as well as periphery characters such as parents) in their formative years while adding context to the present-day mystery and escalating tensions. The book, then, is not just a crime novel but a riveting rumination on the events shaping our notions of self-determination and self-worth (or lack thereof). Parker’s story arc—which includes his assigned partnering with an attractive female officer—interweaves with Trisha’s as he endeavors to reconcile the past with the present; this not only lets Katchur highlight the procedural elements of a cold case investigation but also the personal lives that exist outside her characters’ professional ones.

Cold Woods is an accomplished offering that works as both a standalone mystery and a continuation of the characters and community established in River Bodies. Karen Katchur skillfully explores the nature and consequences of abuse, explaining the perpetuation of that cycle without excusing it. The setting and season, desolate and dreary, provide a fitting underpinning for such a somber story—but also hint at spring and the eventual thaw that comes with it—symbolizing the hope and resiliency that define our human condition.