March 5, 2021
When a psychic is found dead after a cold reading, Bridge expert and investigative reporter Wendy Winchester must put her amateur sleuthing skills to the test to find the murderer. 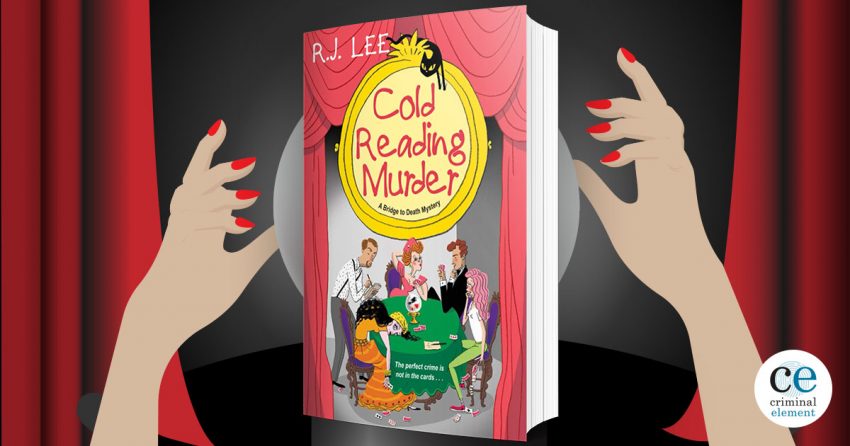 Welcome to Rosalie, Mississippi’s wedding of the year: Wendy Winchester, the daughter of Police Chief Bax Winchester, is tying the knot with her longtime beau, Detective Ross Rierson. Wendy, the heroine of the Bridge to Death Mystery series, wears two hats. After a successful run as an amateur sleuth, she was named a full-time investigative reporter at her local newspaper, the Rosalie Citizen (N.B., Rosalie is a tweaked version of Natchez, MS). She is also a recent and enthusiastic convert to bridge: she runs “Wendy’s Rosalie Country Club Bridge Bunch,” a casual organization where Wendy tutors bridge newcomers with the intent of transforming them into intelligent bidders. The five members of the Bridge Bunch have been invited to her wedding and what a motley crew they are.

Meet the widow Charlotte Ruth, a lady of a certain age who is excited about the possibilities of meeting an “interesting” man at Wendy’s wedding. Middle-aged Vance Quimby is there to soak up the vibes.

“A genuine Rosalie wedding can’t be beat for local color, and that’s just what I need to bring this Great Southern Novel of mine to life. Thank you so much for including me in your plans today.”

“Think nothing of it. We do go all out in this town,” Wendy said, making a sweeping gesture that included the entire tent full of chattering people. “And I can assure you that my wedding wasn’t even one of the especially big ones. Not by a Mississippi River mile.”

Rosalie native Sarah Ann O’Rourke, a “gangly, freckled-faced student who was entering her senior year at the local College of Rosalie,” is the third member of the club. She has a troubled relationship with her mother, Dora O’Rourke. In Wendy’s opinion, Dora is too high maintenance and constantly inflicts her conservative religious views on Sarah Ann. Aurelia Spangler is perhaps the most intriguing of the group. A practicing psychic, Aurelia has an air of mystery about her—enhanced by colorful attire. Wendy can’t resist tweaking Aurelia.

“I can’t help but ask you if you have any predictions for my marriage,” Wendy said with a great deal of playfulness. “Any cold readings you just happen to have on hand at the moment?”

Surprisingly, Wendy gets her wish: Aurelia volunteers to give everyone at the table a cold reading after bridge the following week. The last member of the group is Milton Bagdad, an attractive young man with “irresistible dimples,” who delivers singing telegrams all over town on behalf of his employer, Party Palooza. Wendy thinks “she could not possibly have assembled a quirkier group of people if she had summoned them from consulting a Ouija board.”

Cold Reading Murder mashes up a clairvoyant’s cold reading with a beginner’s bridge tutorial. A cold reading is when the psychic has no prior knowledge of their subject’s personal concerns and background. That said, a practiced cold-reader can quickly glean a great deal of information by analyzing someone’s body language, age, clothing, hairstyle, and other attributes. It’s also not unheard of for psychics to plant accomplices in a crowd to pick up personal snippets that the psychic then uses in an ahem cold reading.

What’s the point of an in-person bridge tutorial? Can’t you learn everything on YouTube? Don’t underestimate the difficulty of learning bridge, a complicated game with a lot of moving parts. Former teacher Marlene Walther describes the process in an intriguing way.

Beginners “are bombarded with information that often feels like learning a new language,” says Walther, a qualified ACBL bridge teacher in Niagara-on-the-Lake, in Ontario, Canada. “I am very careful to introduce one concept at a time. I would compare learning to play bridge to starting to move a tank. The initial surge to get it moving is huge; after that, it should roll along quite smoothly with only little bumps here and there.”

Covid currently necessitates online learning, even of bridge.  But thankfully, Cold Reading Murder is set in a Mississippi world where a bridge tutorial takes place in a stunning mansion, overlooking the mighty Mississippi. Aurelia Spangler is true to her word, inviting the bridge bunch to her home, providing a delectable buffet of drinks and snacks, culminating with cold readings for all. Wendy’s students are a little distracted—alcoholic drinks can result in “a bad case of muddled brain cells.” Still, after an hour at the table, they are all getting the hang of it. Let the cold readings commence. Aurelia has an uncanny read on their personal lives, information which spills out when the group kibitzes about their individual readings. Some of them seem quite shaken by Aurelia’s insights. Perhaps future sessions should take place at the country club.

A couple of days later Rex and Merrie Boudreaux, the owners of Party Palooza, visit Detective Ross at the police station to report a missing person—Milton Baghdad, their singing telegram employee. They tell Ross that Milton was very disturbed by his reading with Aurelia. Ross tells Wendy what’s happening, and she decides to visit Aurelia in person (because Aurelia has been dodging Wendy’s texts and calls). Sadly, when Wendy arrives she finds Aurelia dead. Beside the body is a suicide note and traces of cocaine.

I’m tired of making my living this way. This has gone on too long. I’m doing more harm than good to people, and it’s time for me to leave. I’m sorry for everything. Aurelia Spangler.

Wendy is not convinced that Aurelia committed suicide. To her, the scene seems phonier than Aurelia’s act. Wendy’s husband and father are very respectful of Wendy’s ability to see more than meets the eye. You might wonder, how does bridge fit in with murder? It’s tricky *pun intended*. There are more than a few “little bumps here and there” in Wendy’s quest to uncover Aurelia’s killer. Cold Reading Murder is another absorbing entry in R.J. Lee’s Mississippi-set Bridge to Death mystery series.