February 15, 2022
In Mariko Tamaki's YA novel Cold, Todd Mayer narrates the events that led to his death from the afterlife along with Georgia; a fellow high schooler intrigued by his story. 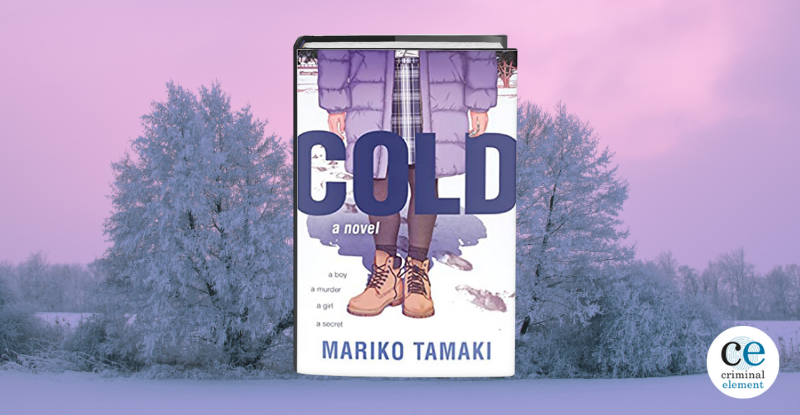 Todd Mayer’s body is found naked, in the snow, just outside of a playground. Todd’s ghost watches with a certain detached fascination as the detectives dig into his death. He remembers dying to be a horrible experience, full of confusion and icy coldness. He remembers being left.

Georgia and Todd didn’t run in the same circles—seeing as he went to the all-boy Albright Academy and she attends an all-girls school. Yet she still feels a connection, as if she’s met him before. But maybe it’s just because her brother attends the same school, or perhaps because they’re both queer, or maybe it’s just the camaraderie of feeling like an outcast.

Whatever the connection is, Georgia follows Todd’s story almost as closely as Todd follows the investigators trying to piece together that same story.

Cold by Mariko Tamaki is a fast-paced, intriguing look into two teenager’s lives (and deaths). Told in alternating point of views, the reader first gets Georgia’s keen observations of life, the town in which she lives, and the swirling intricacies of the relationships around her. And right behind her is the after-life narration of Todd Mayer himself, who follows the investigators trying to hunt down his killer. But this story less about who did the deed and more about the characters coming to terms with themselves.

I’m a big fan of ghosts narrating their own murders. The Lovely Bones comes to mind. There’s something about that perspective that adds an interesting layer to the murder/mystery scenario.

Todd Mayer is a particularly interesting ghost. Tamaki doesn’t delve into the hows or whys of his particular afterlife. It feels like a dream sequence. Though Todd has certain insights—for example, he understands towards the end that it’s his last day as a ghost. But he doesn’t know what happens after.

Bit by bit, the detectives—Greevy and Daniels—drag the hidden pieces of Todd’s life out from their secret places. Todd remembers the night he died section by section.

Except for that one thing. One mistake.

The last night of his life, when he walked out of his front door at 8:00p.m.

Todd tried to remember what his mother looked like, tucking into the couch with her bag of pistachios to watch her favorite show about small-town crime.

Todd walked out the front door. At the end of the stone walk, he stopped. He knew his mom watched him from the window. It was snowing lightly. Todd held up his pink mittens for her to see. Mittens he made himself, which he kept hidden in his coat pockets when he was at school. Then he turned left and walked down the sidewalk toward the bus stop.

Meanwhile, the curious Georgia is intrigued by her peer’s death—and like everyone else, wants to know for sure what happened. She adds his death to the pile of other things she is concerned and curious about. The mean girl dynamic at school, her own attraction toward her best friend, her mother’s incessant observation into her life, and her brother’s weird behavior.

Not only does her brother, Mark, seem stressed about all the activity happening at the Albright Academy, but he lies about knowing Todd Mayer. While this strikes Georgia as strange, there a million reasons to deny knowing a murder victim—no one wants to be accused of anything—but there are fewer reasons to hide a big bag of money in your bedroom. When Mark flakes on his laundry chores, Georgia takes up the slack:

Grabbing the laundry basket, I notice Mark’s schoolbooks are stacked up on his desk with a bunch of papers next to a stack of thick envelopes from different colleges, which started arriving last year. On top of the books is a take-out bag that says Mac’s Burgers in bright red neon-style lettering….

My eyeballs graze over exercise bands, a stack of protein bars, resting on the Mac’s Burgers bag, perched on top of Social Movements in American History.

The bag is weird for two reasons. One, it’s weird because Mark is so super paranoid about what he eats. He ONLY eats like such specific stuff when he’s training and he’s always training.

Two, it’s not greasy which is what it would be if you had a big juicy Mac Burger in it or a large or even a small fries. I know this as someone who has left French fry boats in her pockets and in other places and so has many things that smell like grease in her closet and on her floor.

And it’s not crinkly, like how a bag would be if you put fries in it then grabbed it by the top. Instead it looks like it’s been folded in half and folded again. Like…

I step over to the desk, unfold the top of the bag, look inside and see…money. Lots of money.

It turns out the teenagers of this small town have many secrets. Todd’s detectives have their hands full trying to sort out what is related to his death and what other things may be going on beneath the surface. And Georgia—a young girl who never even met Todd—may be holding the key to at least one mystery.

Cold is an intriguing and quick read from Mariko Tamaki, who gives these teens real life and depth in a dark situation. No motive here is shallow. These students are struggling with coming to terms with themselves while facing the worst that humans can do to each other.

Listen to an audiobook excerpt of Cold by Mariko Tamaki!