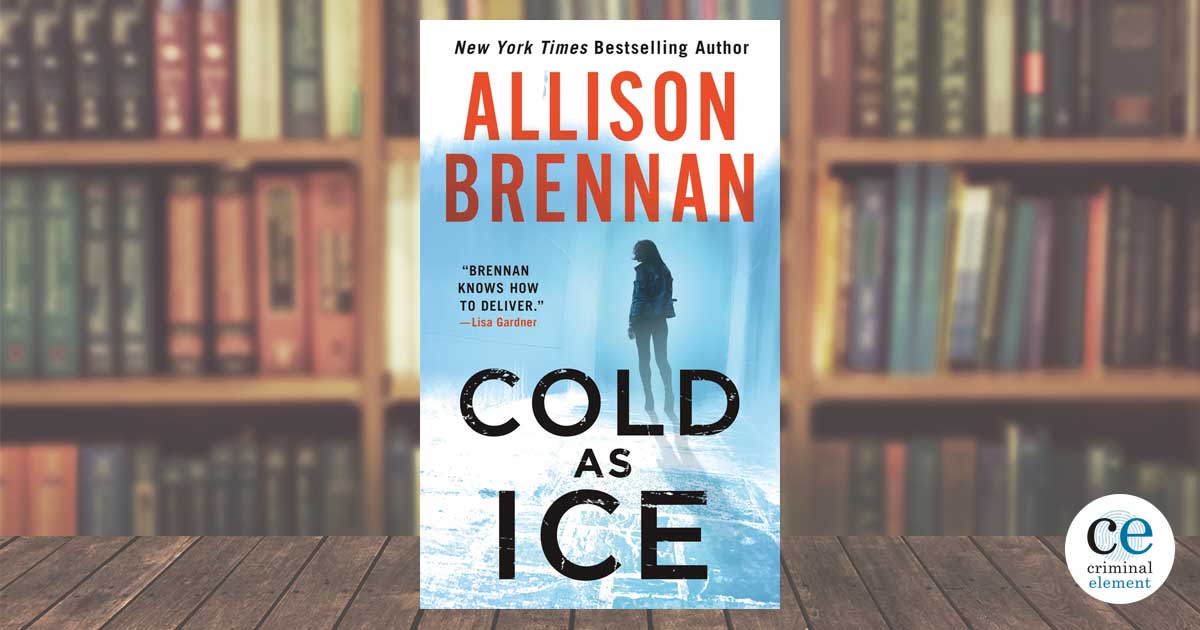 In New York Times bestseller Allison Brennan’s Cold as Ice, FBI Agent Lucy Kincaid must get into the head of a psychopath to save her family, and herself.

Cold as Ice marks Allison Brennan’s 17th Lucy Kincaid thriller, proving that readers can’t get enough of Kincaid’s personal and professional triumphs and struggles. Brennan describes her heroine as “a loyal, smart, determined FBI Agent who’s not afraid to bend the rules for justice.” Cold As Ice is a three-ring circus—and then some.

It feels like the plot for The Pelican Brief: two Supreme Court justices are assassinated within a very short time period, and although we don’t understand why for quite a long time, the immediate chaos is intentional.

Someone wants to incapacitate Lucy Kincaid and what better method than falsely accusing and arresting her husband and then preventing her go-to team from proving his innocence? Her out-of-town reinforcements are unavailable to Lucy: “Sean’s brother Kane is missing in Mexico.” Even superwoman Lucy Kincaid can’t save the day on her own, so she’s greatly relieved when her remaining professional friends and family rush to her defense. Before Brad Donnelly is grabbed off the street, he rebuffs his superior’s advice to stay clear of the developing situation, sure that Nate Dunning is nobody’s drug runner.

“Don’t think I don’t know what your people are going through. But this is fucking bullshit.”

“I’m sorry, Brad. This case is way over my head, and I think you should sit this one out, too.”

Brad ended the call. No way in hell was he sitting this out. He called Aggie Jensen, a smart young rookie who’d started with him eighteen months ago. She was a bit quirky and sometimes too casual in an office format, but he never called her on it—he liked her ability to think of every possible contingency as easily as she breathed. Not to mention she was a young, tech-savvy recruit who’d graduated top of her class at the DEA training facility at Quantico. Brad had run a secondary background check on her and she was exactly what she appeared to be: a twenty-eight-year-old computer geek from a family of military heroes and cops.

“Yep, boss?” Aggie said when she picked up the phone.

“Dunning with the FBI was detained after SAPD found sixteen kilos of coke in his truck. I need everything you can find about the case.”

Nate Dunning knows that the massive amounts of cocaine found underneath his vehicle were planted,  so he connects with Aggie to find Sean and Brad and clear his name. Aggie is delightful and readers will want to see more of her in forthcoming books.

Lucy knows instantly that Elise Hansen Hunt is behind the plan to bring down Sean and she’s right. Lucy’s ability to get “into the head of a psychopath” provides her with a roadmap that connects the not-so-coincidental occurrences involving her husband and closest companions.

Two years ago, FBI Agent Lucy Kincaid put psychopath Elise Hansen Hunt in juvenile detention for her role in an organized crime syndicate. Now eighteen, Elise has been released with a clean slate, and plans to take her revenge by making Lucy’s life hell.

Elise doesn’t think it will be easy to destroy Lucy’s life but there’s nothing she wants more.  Her criminal father gives Elise crystal-clear instructions that Lucy is not to be killed.

“No deviations from the plan. No games.”

“You haven’t met her. She knows things she shouldn’t know.”

“She’s just a cop. But I promised her safety—we lose everything if she dies. Do you understand me? She lives, we get all the money her husband stole from us. All of it. That’s the agreement. She dies, we get nothing and we’ll be hunted.”

“When all is said and done—and after time has passed, a year or two, tops—you can take her down. But this is the one time where you have to exercise patience.”

“Okay.” At least she had something to look forward to. And a year or two might even turn into a month or two.

There are so many clues in this conversation. The most significant—who or what is preventing them from killing Lucy Kincaid? She’s been a thorn in their side forever, so why not take her out if the opportunity arises? It appears that someone is facilitating—perhaps bankrolling—their plan to destroy Lucy’s life. The price of that assistance is that Lucy is untouchable. To repeat, “She lives, we get all the money her husband stole from us. All of it. That’s the agreement. She dies, we get nothing and we’ll be hunted.”

Check out all of our latest reviews!

Aggie Jensen visits the juvenile detention facility that has been Elise’s home for the last few years. It’s a master class in how to unravel seemingly innocuous events and examine how they might lead to criminal actions. Aggie gently but persistently questions Marie, “a tall, underweight girl with very short hair and big brown eyes.” Marie recounts numerous instances of Elise’s kindness to her—how Elise protected her against Danielle, a fellow-student who bullied her—and recalls that Elise “talked about a psychic a lot.” This psychic, Lucy, seemed to know and anticipate everything about Elise. Perceptively Marie sensed Elise was not an admirer: “But then I got the feeling she didn’t like her at all. I don’t know, that doesn’t make sense.” Much of what Marie says doesn’t make much sense but that’s par for the course for interviews.

Cold as Ice is a giant jigsaw puzzle with some pivotal pieces missing on the floor. Lucy, Aggie, Ryan, Kane, and their allies search frantically yet methodically for Sean and Brad. They have an elusive ability to synthesize a torrent of fast-moving information, while never taking their eyes off the prize of rescuing the good guys and putting the bad guys behind bars. Set aside some time before you start Cold as Ice because you won’t be able to put it down.