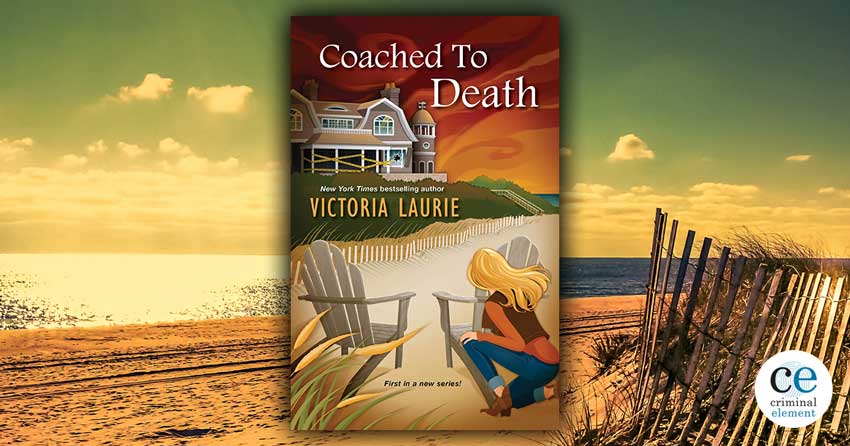 Coached to Death by Victoria Laurie is the first book in the new Life Coach Mystery series, where Catherine Cooper settles in the Hamptons on the heels of a nasty split from her long-time husband but soon discovers that starting fresh on the East End can be deadly.

What is needed for a satisfying life? Air, water, food, and shelter come to mind. Upping the ante, Freud said humans need love and work. Cat Cooper is recovering from a nasty divorce, so love isn’t in the picture, but Gilley Gillespie, her best bestie, lives in her guest cottage and keeps her spirits up. There’s also Sebastian, Cat’s futuristic AI butler who pampers her in all the ways that matter. Think of Sebastian like Alexa on steroids, “The house was almost totally dependent on him.” Cat can’t imagine life without him.

But perhaps I was especially partial to him because he always greeted me as “Lady Catherine.” It made me feel queenly.

The sound of running water from the master bedroom drifted to my ears. “What temperature would you like your bath today, ma’am?”

Cat and Gilley helm the Cat & Gilley Life Coach series. Divorcée Cat sold her phenomenally successful marketing company for an obscene amount of money—just over fifty million (half of which went to her philandering husband)—allowing her to afford a gorgeous East Hampton mansion, right on the water. She decides to become a life coach, an enterprise she runs out of her newly purchased, 200-year-old office building. Success leaves clues. Cat’s passion for life makes it unthinkable that she would sit around and spend her fortune—the entrepreneur in her gets back in gear. She does a creative self-affirmation before her first client, Erma Kirkland, shows up.

And through this process of my trademark Listen, Learn, Lend technique, Erma would gradually evolve, like an awkward duckling, into a confident swan.

I imagined her back on that love seat after a few months, fresher, prettier, more styled, and confident. She’d be Erma Kirkland 2.0, and she’d rave about her new life and tell everyone how working with me had helped her. Her friends would come to me, and I’d fix them, then their friends would line up, and soon I’d have a blog…

You get the idea. Cat brims with self-confidence. Perhaps in a future book in the series, she’ll franchise her “Listen, Learn, Lend” idea.

The only fly in the ointment in Cat’s flourishing Act II is Heather Holland, her nasty neighbor. Gilley can’t understand why Cat plans to attend a luncheon at Heather’s house, “Why are you going, again? That woman hates you.” In the six months that Cat has been in East Hampton, Heather has called the police on her and complained to “the East Hampton Town Board all through the construction process” of Cat’s house. Heather’s torment of her new neighbor is relentless. So why, indeed.

“Oh, I know she hates me,” I said. “And I’m positive that she’s hoping I don’t show up, which is exactly why I have to attend. If I don’t go, she can claim that I’ve snubbed her invite and the opportunity to bury the hatchet.”

“Huh,” Gil said, pondering that. How are you so sure that’s what she’s up to?”

I bounced my eyebrows. “I’m sure because after nearly twenty years of running my own marketing firm in a highly competitive field populated mostly by women, I’m now fluent in bitch.”

Gilley feels a lot sorrier for Heather when she winds up dead. Cat and Heather have a blow-out argument at the luncheon, and Cat storms out, leaving some choice insults and an antique-cut crystal punch bowl behind. The same punch bowl the police say killed Heather. It’s not going to be easy to run a life-coaching operation from behind bars. Cat and Gilley are determined to find the real murderer, with or without the approval of the local cops.

Coached to Death reminded me of Janet Evanovich’s Stephanie Plum series because of the humor and a subplot of the captivating Cat being pursued by two charming gentlemen. The class distinctions in the Hamptons—stonking new money matched by serious old money—necessitates services and stores to keep rapacious consumers happy, a situation the engenders a certain amount of tension. Cat’s an unusual heroine, confident with a quick temper and sharp tongue—not to mention a thirst for revenge. Her partner, Gilley, has mad skillz when it comes to digging deep online, plus she’s got a deft hand with a drone. Lastly, the life-coach angle offers great scope for future storylines. Coached to Death is a very enjoyable debut, and I look forward to more of Cat and Gilley’s trademark pizzazz.

Read an excerpt from Coached to Death!