November 6, 2019
City of Scoundrels by Victoria Thompson is the third novel in the Counterfeit Lady Series, in which former con artist Elizabeth Miles must use her skills to protect a woman and her unborn child in the midst of WWI. 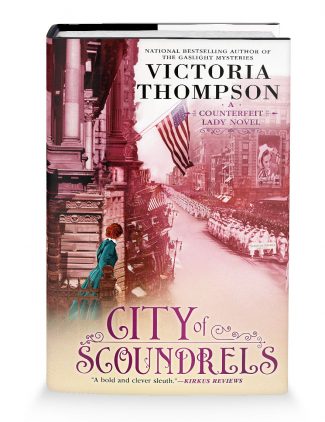 Elizabeth Miles is contentedly settling into the life of a respectable young woman in New York City…or she would be if war wasn’t threatening to take away her beloved fiancé, Gideon Bates. As the Great War in Europe rages on, the draft age has been expanded. Gideon, an upstanding lawyer by trade and inclination, won’t hear of a deferment and is prepared to go where his country needs him. In the meantime, he’s donating his legal skills to drawing up wills for soldiers before they ship out.

One such is Corporal Tom Preston. Like Gideon, he’s refused the deferments that he could easily get, in his case due to his family business providing shoes for the war effort. However, as a recently married man with a baby on the way, he wants to make sure his wife and unborn child are provided for should anything happen to him. Alas, he cannot trust his own family to look after Rose, a woman they would most likely disapprove of were they to know of her existence.

When Rose receives the dreaded military telegram weeks later, it seems the very worst has happened—Tom Preston has been reported killed. She’s in for a further shock, however, when the updated will Gideon had drawn up for Tom goes missing. Then an attack on Rose’s life confirms Tom was right to mistrust his family.

Enter Elizabeth. She might not be able to prevent Gideon from risking his life on the battlefield, but she knows she can protect Rose. Better yet, she can make sure that Rose gets what is rightfully hers. After all, what’s the point of having grown up in a trade if you can’t occasionally exercise your skills when they’re most sorely needed? Especially when that trade is the art of the con.

Gideon is most uncomfortable with anything that would risk his beloved’s life but Elizabeth is quick to assuage his doubts, especially when they find themselves up against what appear to be enemies of the state:

“I have no intention of putting myself in danger,” she assured him without even waiting to hear his protest. “And think about it. We’ll be doing a wonderful thing for our country by ruining all their plans.”

“After you’ve cheated them out of their money,” Gideon recalled.

“Money they would only have spent on doing their spy work, so that’s just another wonderful thing.”

Elizabeth might not be thrilled about the war, but she’s still a patriot, even as the laws grow stricter and any dissent is viewed as evidence of treason. As always, Victoria Thompson does a wonderful job of bringing early 20th century New York City to life. Previous books in this excellent series dealt with women’s astonishing lack of rights and the fight for suffrage. City Of Scoundrels continues to expand on that theme while also looking at the two most important events in the city that year: World War I and the outbreak of Spanish influenza that devastated populations around the world. The depictions of the latter are especially grisly, and disturbingly accurate, as here where Elizabeth has taken a streetcar at the height of the pandemic:

The driver glanced at her with weary eyes above his mask, not even paying attention to whether she paid her fare or not. She took a seat at the very front. The conductor wandered down the aisle, nearly staggering as he tried to catch the hanging straps or the back of the seats to steady himself. He looked terrible, his skin almost gray. Elizabeth realized she might have made a terrible mistake the moment before he fell, keeling over as if he had been pushed, although no one was near enough to have done that.

Elizabeth was halfway out of her seat when she realized she could do nothing for the man, short of helping him up, and there were others on the streetcar closer. But no one moved. They simply stared, and to her surprise, the man made no move to get up, either. He made no move at all in fact, and someone finally said, “Hey, driver, he’s dead.”

This juxtaposition of grim historical fact with witty banter and sophisticated plot machinations is a hallmark of the Counterfeit Lady novels, and one reason I enjoy them so greatly. The mysteries are as intelligent as Elizabeth is large-hearted, making for a thoroughly winning combination. Better still, Ms. Thompson’s research is outstanding as she unflinchingly shows us what life was really like back in the day. I was genuinely moved to tears by this third book in the series and cannot wait to see what’s next.